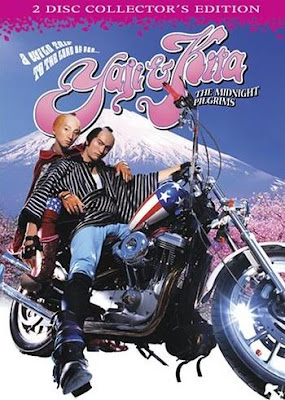 YAJI & KITA: THE MIDNIGHT PILGRIMS
(2005, Japan, Mayonaka no Yaji-san Kita-san)
Not a gay comedy. It's much, much more.

Some Japanese comedies like Swing Girls and Waterboys aim at international audiences with accessible 'universal' humour. The more offbeat comedies are primarily for a Japanese audience, full of cultural references, cameos and in-jokes. I assumed that Yaji & Kita was the latter, and was surprised that it was released on DVD in the US, especially with an upfront gay storyline. But this is a unique movie, that defies simple assumptions or categorisations.

It begins as a freewheeling comedy, with singing transvestites, a comedy baddie (Riki Takeuchi of Battle Royale II), and a gang of housewives who think they're watching a TV show. But then it turns darker and beautifully philosopical for a dramatic and very rewarding second half. 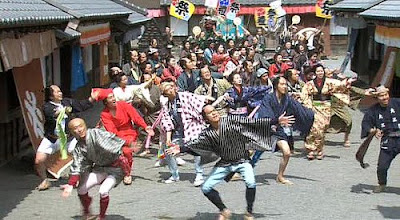 It begins with two samurai back in the Edo period (though they don't have swords). A surreal video-game dream and a ride on a motorbike soon shatter the period feel. Kita is a drug-addict with a loose grip on reality, so these anachronisms could all be in his head. But anything goes, as they embark on a journey across Japan to reach a temple where Kita hopes to kick his habit. Along the way, the more people they meet, the harder their quest gets, especially when both Yaji and Kita are holding back huge secrets from each other...

Early on, it's very episodic as they meet bizarre new characters in each town. I settled into just letting it all wash over me and assumed I was missing out on the in-jokes. But I did recognise Kazuo Umezu and Sadao Abe (Uzumaki, The Great Yokai War) acting more bizarrely than usual. But then the seemingly random events started to make more sense and a solid storyline started to emerge. It's ambitious and complex, and I appreciated one of the characters saying "I'm lost" during the climax.

The gay couple are central to the plot, but it's not at all intended for a gay audience. It's more like a running gag, aimed at a straight male audience, like the gay-themed plots and characters of South Park. Yaji & Kita are gay because it's a subversion of old Yaji & Kita films and stories. The script is an adaption of a cult manga, which in turn is based on an 18th century comic novel, previously adapted as a comedy in the 1920's and 30's.

The lead actors look a little uncomforatable with their intimate moments, a couple of scenes of mouth-on-mouth kissing (shown in the behind-the-scenes extras). But for the rest of the film it could just as easily be a buddy movie. While the gay relationship is initially played for laughs, it's never offensive, and the plot matures as it progresses. It's rebelling against the norm, along with plenty of irreverent nudity, swearing and even some punky rock. There's an early homage to Easy Rider as they jump on a familiar-looking motorbike. 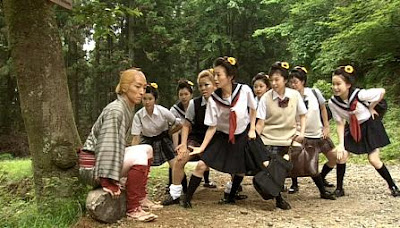 It's misleading that Kita (Shichinosuke Nakamura, also seen in The Last Samurai) has been made to look so weird in the poster. I was almost put off, thinking he was going to be a stereotypical gay comedy character. He's sleightly built but not effeminate. His character is primarily a junkie. Effortlessly handsome Tomoya Nagase (TOKIO band member, also seen in Ring: The Final Chapter) expertly plays the good-humoured Yaji. Japanese pop stars-turned-actors seem to be far better at acting than the ones in the west.

I was surprised at how well the central characters are handled. But this is due to a hugely imaginative film-maker, Kankuro Kudo, a first-time director whose talents mature even during the film (which was shot in sequence). He's also a successful scriptwriter, responsible for the wondeful Zebraman and Maiko Haaaan! (also starring Sadao Abe).

Another surprise were the special effects, many of which are wild and eye-poppingly good, when they're detectable. According to the extras, post-production was done over two years, plenty of time to perfect them. Many scenes don't depend on effects but on inventive sets (like the seemingly endless house of shuttered doors) and expert lighting so carefully controlled that two people on the same set appear to be in different time zones.

Hard to categorise or define, I'm very glad that I've seen this, and look forward to more from the director.

Here's the Japanese trailer...
Media Blasters rightfully thought they had a cult classic on their hands and gave this a deluxe two-disc treatment. The US DVD is anamorphic widescreen, the English subtitles are carefully and humorously translated, and the extras disc includes an astonishingly honest 'Making Of' documentary, very different from the Hollywood style. It's are to see a director looking tired and distraught while watching a scene being filmed.

There are also enthusiastic reviews on FilmBrain and Twitch.