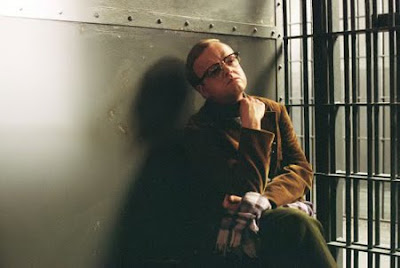 The story so far…
Kansas, 1959. Two men rob a remote farmhouse at night. They kill the entire family in cold blood and flee. The story hits headlines across the country and a manhunt begins. Celebrated author Truman Capote takes an interest in the story and travels to Kansas to begin documenting every aspect of the case, interviewing the police, detectives, as well as friends and relatives of the victims. When the killers are finally caught, Capote interviews them, at length. The resulting book is a unique, narrative presentation of a crime. It’s widely lauded as a critical success. Two years later, In Cold Blood becomes a hit film.
Almost forty years later, two more movies are being made, Capote and Infamous, based on different books. But both telling very similar stories about the killings and how the writing of the book affects the author. Capote is released to wide acclaim in 2005 and gets five Oscar nominations, including Best Picture. But Infamous has its release delayed until 2006 - the reviews are good, but it barely competes with the Oscar-winner (Best Actor for Philip Seymour Hoffman) that beat it into cinemas.
Capote and me
I first saw Truman Capote in his suitably bizarre role in the Neil Simon comedy Murder By Death back in 1978. I knew he was famous, but not that he’d written Breakfast at Tiffany’s. Seeing photos of him at Studio 54 and reading stories about him in Gore Vidal’s books, I built an image of a short, loud, unique, gossipy gay individualist who wrote fluffy comedies about New York society. That he’d also written the best screen adaption of The Turn of the Screw (filmed as The Innocents) and a tough documentary novel about mass murder didn’t quite fit that image.
When I later saw Michael Mann’s Manhunter, I thought the opening hook, that a serial killer would kill an entire family, was a new idea. I eventually tried to read In Cold Blood, but thought it a long, dry presentation of endless facts.
So now, Capote and Infamous come along, I had two chances to learn more about Capote and his reasons for writing In Cold Blood.
To try and get a different angle I watched Infamous first, to give the underdog a chance. Then Capote, and finally In Cold Blood, the reverse order of their original release dates. 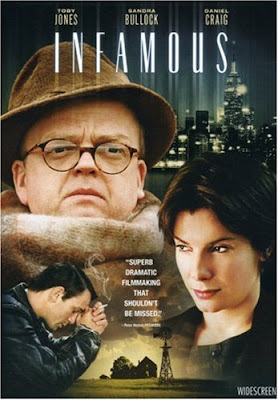 INFAMOUS
(2005, US)
At least, Hollywood didn’t remake In Cold Blood (there was already a 1996 TV movie) opting instead to tell the story of how Capote wrote it. Unfortunately for Infamous, a rival production was filming the same story. 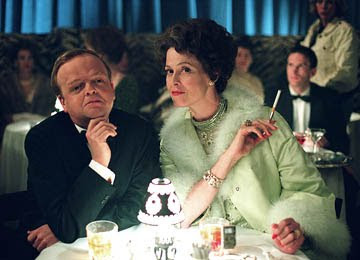 It starts off well, as a comedy, Truman in fine form amongst the jet-set of Manhattan society. I was surprised by the added starpower of Sigourney Weaver and Isabella Rossellini in cameo roles. The comedy continues as Capote (Toby Jones) travels to Kansas with Nelle Harper Lee (an excellent performance from Sandra Bullock) who has crucially just written To Kill A Mockingbird.

Even in a small farming town, Truman doesn’t tone down his extravagant, out-gay personality even a notch. Even though he’s constantly mistaken for a woman. Respectfully he becomes more serious as he attempts to talk to the townsfolk, in a tight community that’s been shaken by the tragedy. 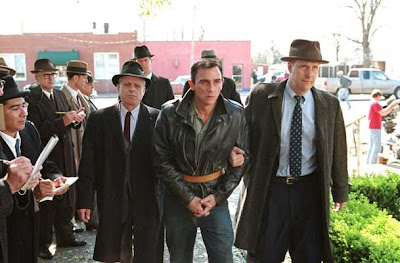 When the killers are captured, Capote manages to talk to them and stays in Kansas, developing a long-standing and increasingly close relationship with one in particular (played by Daniel Craig). Though it’s not clear why he focuses on only one of them, Capote needs to build his trust in order to find out what happened that night, but if he confesses it could affect both their sentences…

As the case draws out over the years, the stress takes its toll on Capote as he struggles to complete the book. He’s not shown in a perfect light, when he lies to his friends. The story gets a little fragmented, looking more like they've skipped to all the juiciest bits from the book, rather than keeping to a narrative.

Infamous successfully depicts the effect the murders have on the town, and even the country. But the murderers also get sympathy, sitting on death row. Truman says that the title of his book is as much about the death penalty as the original crime. However, this could be another lie to keep the killers’ cooperation, and therefore keep the flow of material for the book. But the fate of the murderers looks as brutal as their crimes. 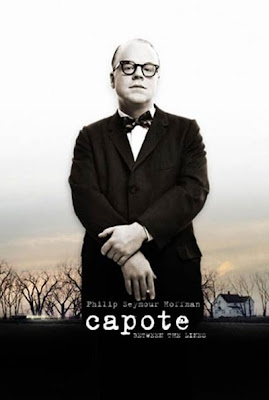 CAPOTE
(2005, US)
Watching this a few weeks after Infamous, the story was far too similar. The story based on exactly the same events. I felt that many scenes were too short, not including as much background information. Important supporting characters were given far more time in Infamous, especially the Detective in charge (Chris Cooper) and Nelle Harper Lee (Catherine Keener). 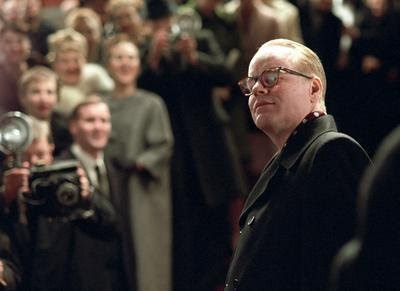 Also, a couple of pivotal scenes have little dialogue, the audience supposedly settling for Philip Seymour Hoffman just standing there acting... (like the bizarre scene, above). Hoffman is also allowed to indulge his impersonation of Capote’s mumbling lisp to the point of inaudibility.
Toby Jones’ Capote in Infamous, is more sympathetic and more audible, not to mention the closer physical resemblance. I’d first seen Jones in The Mist and then learnt he’s the son of Freddie Jones, one of my favourite British character actors. Not only did his dad play the best Frankenstein experiment (Frankenstein Must Be Destroyed) but is a regular collaborator with David Lynch (Dune, The Elephant Man). Not much bearing on Toby Jones as an actor, but interesting trivia.
Capote focuses on Truman manipulating the situation for his own ends, which admittedly was affecting his life drastically. While concentrating on his more controversial decisions, it also presents less context for the viewer to decide for themselves. Infamous concentrates on Capote’s developing relationship with one of the killers, which I thought was more interesting, as long as it was true. 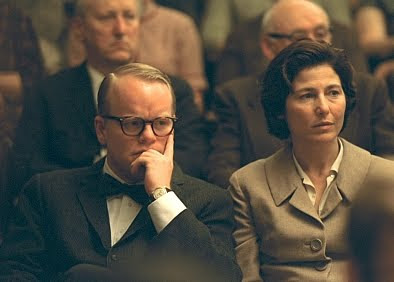 In comparison, Capote felt like it had more money up on the screen, with more extras in the crowd scenes and wider shots in the historical recreations of settings, like the courtroom. It’s also noteworthy for the beautiful but bleak cinematography, emphasising the wide open spaces of flat Kansas farmland.
Whichever you see first, the other will seem like a close copy. Two too similar versions of the same events. It’s almost unbelievable that both got made. 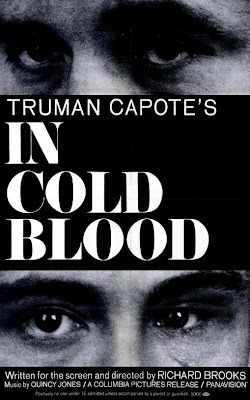 Wow. The film of the book, released only two years after it was published. A book and a murder case that the whole country had been talking about, but Richard Brook’s movie doesn’t play it safe. Like the book, it’s a meticulous recreation of the events, but also one of the best true-crime movies. It takes risks with the narrative and the cinematography, with edgy language and superb performances.
It starts with Quincy Jones’ exciting offbeat music and stays gripping to the end. It felt like they were trying to cram in as much detail from the book as possible. I was particularly impressed with the transitions between scenes, locations and time frames. Sometimes visual links, sometimes stream of consciousness logic. It keeps the audience concentrating - blink and you might miss a switch to a different location, or a different month.

The black and white photography is superb, even Vegas looks good. The look of monochrome in 2.35 widescreen was short-lived but I really like it. It was by the late Conrad Hall, an award-winning cinematographer who also filmed many episodes of classic The Outer Limits, Marathon Man (1975) and American Beauty (1998).
At the time, shooting in black and white would have been cheaper, as well as a less bloody choice, but it would also be more familiar to 1967 audiences as ‘the look’ of the 1950s. Only the handheld camerawork and zoom lenses identify it as late 1960's.
Paul Newman and Steve McQueen were offered the roles of the killers. This was obviously a prestigious project, but casting the most handsome and charismatic actors in Hollywood would have glamourised the killers.

I already knew Robert Blake (Electra Glide In Blue, Lost Highway) played one of the killers, but was surprised to see Scott Wilson as the other. I’d known Wilson from The Ninth Configuration and Exorcist III, not to mention his recent cameo in South Korea’s The Host. I never knew he was in this. His character is enthusiastic, sleazy and dangerous - usually he plays paranoid and downbeat.
The late John Forsythe (Scrooged, The Trouble with Harry, Dynasty) is the detective in charge of the murder hunt. The strongest performance I've seen him give. A dogged and professional policeman, a level-headed choice to nail one of America’s most sensational murder cases.
Of the three movies, this is very different. Truman Capote isn’t represented at all, which feels strange knowing the amount of his involvment. There’s just a small role, a detective, who subtly represents ‘a writer’. But this is really just the story of the killers, not about the writing of the book. While the effect of the murders on the local community isn’t shown as much as Infamous, this is the only version that fleshes out the family of victims as characters. Something I felt lacking in both the recent films.
The script for In Cold Blood still feels modern - tough-talking, swearing even, interested in psychiatry (and psychics) for clues to the murderers’ identities, with a weary cynicism about press involvement.

Afterwards, I discovered that In Cold Blood was shot in many of the actual locations, including the house where the murders took place! A rather ghoulish and cold-blooded attention to detail which occurs in other murder recreations (like 10 Rillington Place and Peter Jackson’s Heavenly Creatures). Maybe it helped sell the film, but surely it’s in poor taste for such a major work.
The exceptional Quincy Jones’ soundtrack sounds like it’s been influenced by Henry Mancini and Lalo Schifrin. I can’t believe it’s never been on CD.
In Cold Blood was all the more impressive because I’d watched it last of the three and it was still fresh and compelling. If you only watch one film, watch this one.

In Cold Blood was a big deal in 1967, but 'true crime' is now a whole department in bookstores, and we’re spoiled for murder documentaries and crime movies 'based on a true story'. It’s still rare that an acclaimed writer interviews the murderers, and an artist directs the movie. While it's a very impressive entertainment, I still feel guilty that if they hadn't murdered anyone, we wouldn't be so interested in their lives. If only they hadn't forgotten to buy that pair of black stockings...

Whichever you watch first, of Infamous or Capote, will probably be the one that impresses you the most. I watched Infamous first, and it was the more rewarding of the two. But In Cold Blood is the movie you mustn’t miss. You can even watch it after either of the others. It’s really that strong. And there isn’t a Truman Capote impersonator in it.

Capote and In Cold Blood are out now on a 2-disc Blu-Ray double bill. Details and screengrabs here on the exceedingly thorough DVD Beaver.

In Cold Blood trailer on YouTube...
Posted by Mark Hodgson at 12:29 pm