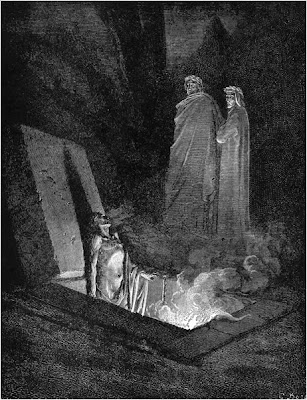 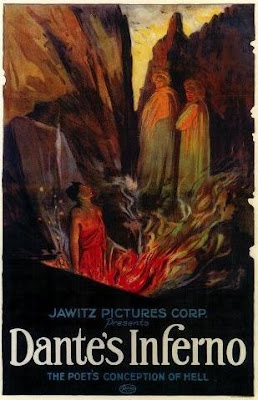 Three films inspired by storyboards from the 19th century...
I'm not interested in the concept of hell as a final destination, but it's a great scenario for a horror movie - demons, chaos, torture and the like. The new video game (and spin-off animated movie) of Dante's Inferno demonstrates that the story still powerfully captures the imagination.

While 13th century poet Dante Alighieri wrote his Divine Comedy in three sections, the first part Inferno focussed on the punishments of hell. While Dante's epic poem is highly regarded in Italian literature, it's the 1857 illustrations by Gustav Doré that are regarded as definitive. Doré's printing methods off wood engravings make his visualisations appear deceptively older. 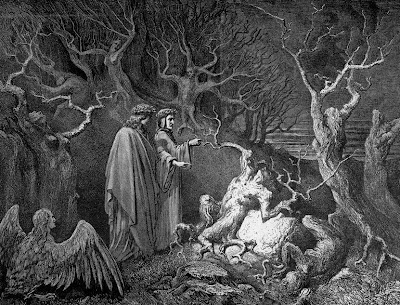 Doré's fantastic and evocative work also drives the cinematic visions of Dante's Inferno, able to inspire camera composition and lighting effects. The movie adaptions that I've seen (1924, 1935) are more interesting to me than any recent incarnations, because they bring to life the black and white gothic of Dore’s engravings. The scratchy faded quality of unrestored film even adds to their dreamlike quality. The films could almost be ancient newsreels of expeditions through the depths of hell. 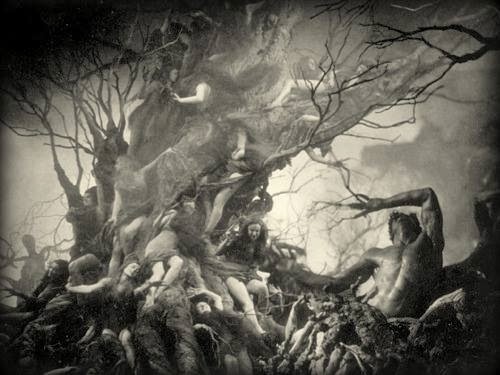 I first became aware of the movies called Dante's Inferno from a few startling stills in Classics of the Horror Film and A Pictorial History of the Silent Screen (all shown here), before I encountered any of Gustav Doré's work. In both films, ambitious underworlds were realised through huge sets shrouded in flame and smoke, with special make-ups to transform actors into demons. The limited information around repeatedly guessed that the 1935 film had recycled the 'hell' footage from the 1924 version. But having seen both, this doesn't appear to be true.

The biblical morality and the classical precedents of art and literature also enabled film-makers the licence to fill the screen with torture and nudity... 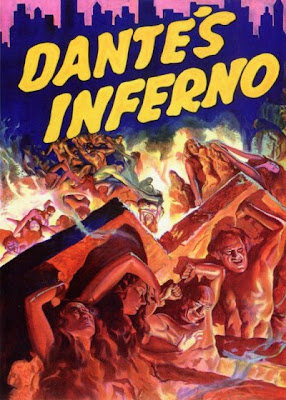 The title actually refers to a fairground attraction, the story is of the people who run it. Spencer Tracy plays Jim Carter, a lazy sailor who loses his job as a ship's boiler stoker. He hits rock bottom when he has to make up as a black guy, (gulp), poking his face through a hole in a sideshow tent as a target for Coney Island punters to throw wooden balls at! I shudder to think what that game was called... Tracy remains in blackface for several more scenes, even as Pop McWade (Henry B Walthall - a regular performer for D.W. Griffith, also the scientist in Tod Browning's The Devil Doll) shows him around his elaborate exhibit devoted to Dante. 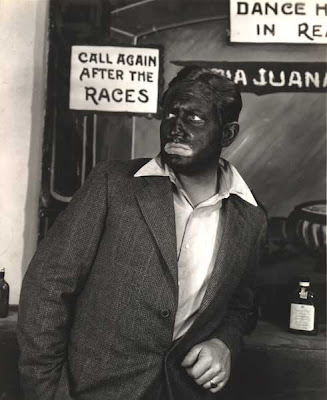 The two team up when Carter drums up new business for the empty attraction by hyping up all the famous, beautiful women of history that have been damned for eternity and the tortures they now endure. (Ironically, the film also sold itself by exaggerating the horrors of hell and the nudity of its inhabitants.) As the exhibit becomes a hit, Carter builds up an entertainment empire, only to fall foul of too many shortcuts in health and safety and the results of bulldozering his rivals...

The meandering storyline fails to portray Carter as being that much of a baddie, as his business practices are infinitely less shoddy than Gordon Gecko's. At home he's such a convincing family man it's hard to dislike him. He's hardly 'hell' material and the story is often far removed from anything from Dante. The climax is also confusingly off-topic, a spectacularly fiery disaster at sea which, luckily, only an ex-boiler stoker can avert. 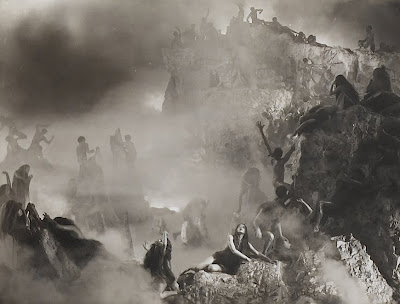 The movie's highlight is Carter's guilty fever dream - an eight-minute descent into hell that absolutely looks like Gustav Dore's engravings. This haunting sequence is quite extraordinary, the focus of the film's publicity and posters. Huge elaborate sets, incorporating pools, fires, smoke effects and stuntwork, covered in dozens of half-naked extras. Cavernous functional scale models and matte paintings blend with the live action. Admittedly it all looks like it's from an entirely different film. 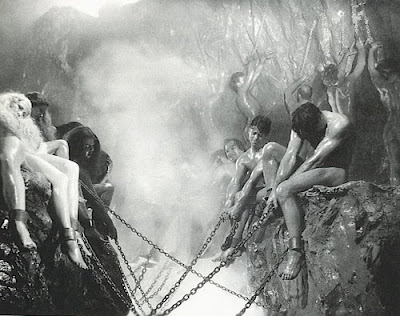 Obviously the writhings of the nearly naked actors had to be sufficiently subdued to get past the Hays Code, but the visible lessening of their suffering makes hell look, well, not that bad, and even a place I'd like to visit. There are only fit young men and women in this underworld. The women's bodies are practically obscured by overlong wigs, leaving the men to bear the brunt of the nudity. Frankly, they're all rather hot. 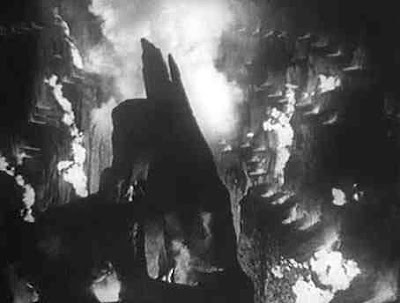 The hooded figures trooping around the underground mountains obviously inspired the hellish sequence 'inside' Disney's The Black Hole. Most of the 'vision of hell' is on YouTube, re-edited to the music of Enigma...

This movie is of interest as a Spencer Tracy vehicle, and as a melodrama with two spectacular scenes of disaster. But the vision of hell is easily worth the price of admission. Dante's Inferno (1935) needs a release on DVD, though it can still be spotted on TV on Turner Classic Movies. 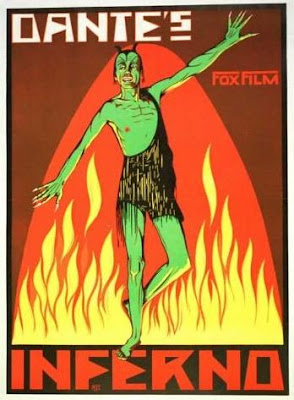 DANTE'S INFERNO(1924, USA)
To check if the 1935 version used any footage from the earlier film, I resorted to a 67 minute bootleg of this silent movie version. Here the story sticks closer to Dante's message, and spends far more screen time in hell.

Mortimer Judd is rich and ruthless. He kicks his pet dog, he's that bad. He's a slumlord during the depression, and his business has just bankrupted his next door neighbour, Craig, driving him to the brink of suicide. As a parting shot, Craig sends Judd a volume of Dante's Inferno, inscribed with a curse... 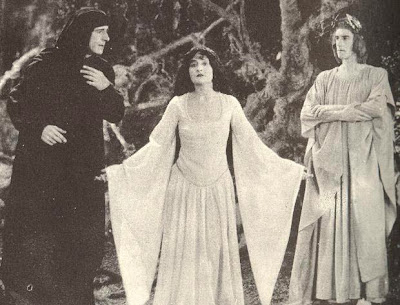 As Judd reads the book, the curse visits him in the form of a demon, causing him to visualise Dante's story. As the poet strays from the path, Beatrice summons Virgil to protect him (pictured) and lead him to safety, but the only way out is through hell... An angel even flies in with a blade of light, to force away attacking the demons and predatory creatures. As Judd watches Virgil leading Dante through hell, his life also descends in a downward spiral. The demon sends a few just rewards his way while he's alive, as a taster for his inevitable punishment in the fiery pit.

The story owes much to A Christmas Carol, though it's harder hitting in many ways, showing enthusiastic devils arriving to take away doomed souls from their expired bodies. The difference is that, unlike Scrooge, Judd can't see the supernatural visitor who is inspiring his visions and steering his fate. 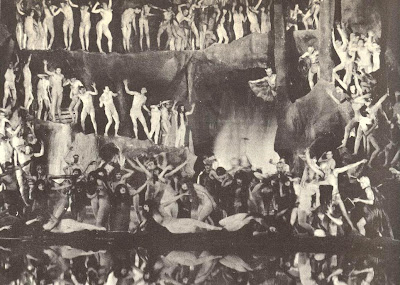 Like the 1935 remake, hell is realised with huge sets, crowded caverns covered in naked extras, surrounded by flame and clouds of smoke. Foreground miniatures and forced perspective angles expand the scale of the vision, adding giant demons. The smaller devilish inhabitants are a lively lot, wielding flaming pitchforks and, ahem, whips. I noticed that the tableau of the naked girl being whipped (pictured above) had been censored out of this print, only showing the whipping, not the whippee. Possibly it was too sexual, too violent or too naked! 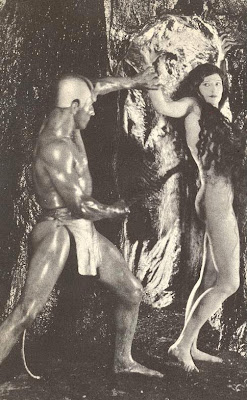 The damned being trapped under slab-like tombs, the curtain of fire, the forest of suicide victims, all come from the pages of Dante as drawn by Doré. But while several tableau are inspired by the same images as the 1935 remake, the footage has been filmed very differently, as far as I could see. 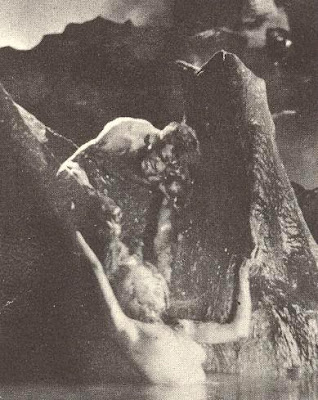 Coincidentally, this 1924 movie also has a character in blackface make-up, Judd's butler. A then-typical portrayal of slow-moving, eye-rolling comic relief. Watching some of his short films recently, it was interesting that Buster Keaton used black actors as incidental characters in his short films, around the same time and earlier, without such stereotyping or the need to use white guys in make-up. 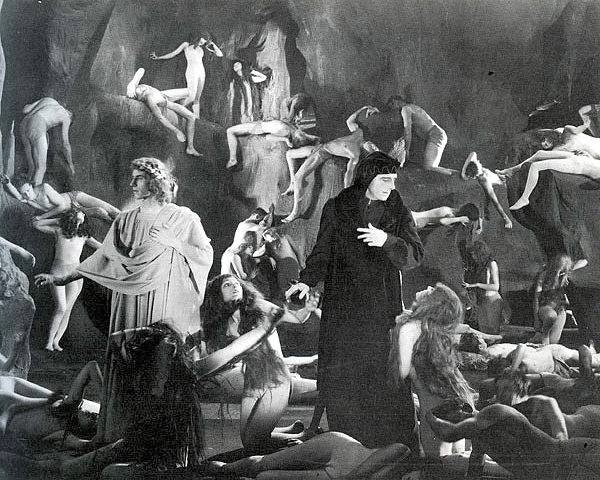 This version of Dante's Inferno has the most lively and twisty plot, intertwined with many more ancient visions of damnation. But it isn’t available on DVD either. The consensus is that two reels (about twenty minutes) of the film has been lost forever (the original running time should have been 91 minutes), though the story didn't seem to suffer for it! 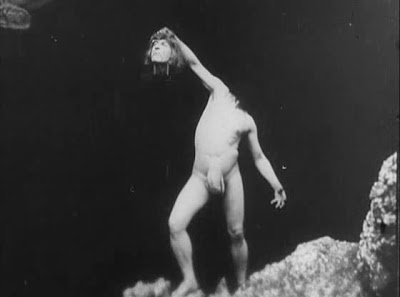 While researching this article, I learned of an even earlier silent version from Italy. It's a straightforward recreation of Dante's tour through hell, led by the Roman poet Virgil. There's no 'wraparound' story set in the present day. Typical of the time, the action is presented wide and distantly, like a stage, with few cuts or close-ups.

This very early film starts off resembling the short films of George Melies, with very basic visual effects and pantomime devils, the main difference being the exterior locations, quarries and cliffs standing in for the caverns of the underworld, but rather overlit for somewhere that's supposed to be underground.

The achievements of the film become more evident further on. Dozens of near-naked extras portraying the damned in various stages of suffering, even being buried headfirst in the ground with their legs sticking out. Some basic splitscreen work to make the sky black, render a walking corpse headless, and portray the gigantic Lucifer. 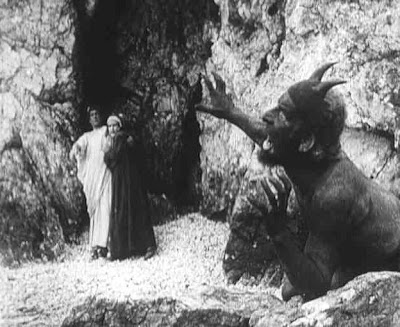 More interesting costumes are the winged demons, and some elaborate animal suits of a lion, harpies and a gryphon. Though the wirework to make them fly is more like a scenery change. It's still an ambitious achievement for a time when movie-making was so young.

This version, the nearly-nude inhabitants of hell at least look like everyday folk, rather than the beautiful denizens of Hollywood's hell. Limbless people are even used to represent the damned, predating the climax of Michael Winner's The Sentinel!

According to a comment on IMDB, this was the first feature-length film to be screened in the US, breaking the feared 'one-hour' barrier, at a time when exhibitors didn't think audiences would sit still that long for a relatively new entertainment! Arguably this could then be described as the first ever horror film. Once again the main draw of the movie was a mix of nudity and torture. 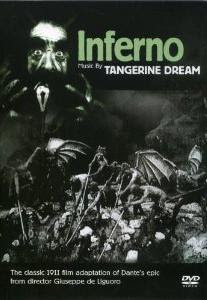 Sadly this, the least interesting version of the three, is the only one out on DVD (pictured), as it was recently restored and rescored by Tangerine Dream.

The 1911 Inferno also has a website with more images. 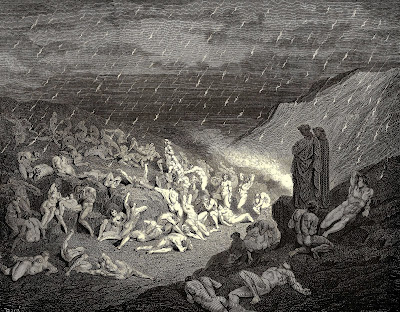 Watching these again, my allegiances changed from 1935 to 1924 as my favourite film version, though the hell sequence in the 1935 version is easily the most spectacular.

Email ThisBlogThis!Share to TwitterShare to FacebookShare to Pinterest
Labels: 1930s, NOT ON DVD, silent movies