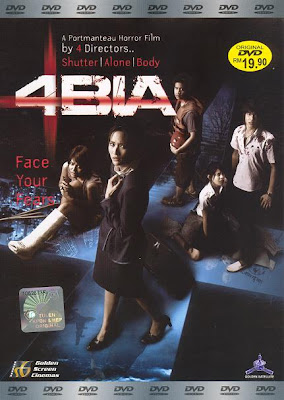 4bia
(2008, Thailand, See Prang)
I'm quite reluctant to write this review. I want to encourage Thai movies internationally, especially since the country is so keen on the supernatural genre. But I'm duty bound to write an honest review, to compensate for the growing hype, from both the east and the west. 4bia may have been successful in Thailand, with a sequel in the works already, but most of the good reviews seem to be saying 'this is very good... for a Thai movie'. Yes, 4bia has elements that are rare in Thai cinema - car stunts and CGI characters, for instance. While this might be impressive in Thailand, I don't honestly think it'll be at all satisfying for regular horror fans. 4bia only has one story out of four that I can recommend.

It's made up of four short horror stories, all by different Thai directors. While the title is a twist on phobia, the common thread is ghosts, as is usual with Thai horror. 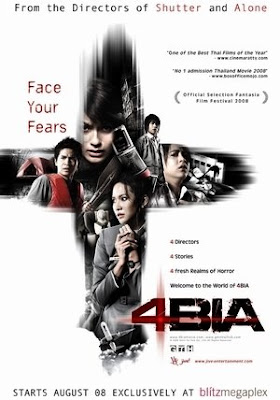 The first segment is called Loneliness (though the onscreen title on the Malay DVD was Happiness). I was disappointed that the story centred on a mobile phone, now a ragged Asian horror cliche. The pace also started quite slowly, as a young woman with her leg in a cast starts getting text messages from a mysterious admirer. Just as I was getting restless, the tale started to get successfully creepy. This was interesting considering the director's previous films included The Iron Ladies films, basically feelgood comedies. But the carefully built atmosphere was shattered by a clumsy shock moment from a shoddy video effect and a confusing sting in the tale. 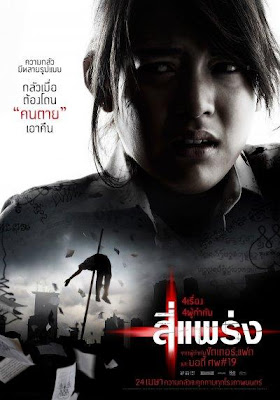 Second up was Tit For Tat, an example of the more gruesome wave of Thai horror that aspires to ladle out bloody shock effects. A schoolboy is victimised by a nasty gang of bullies and takes revenge using black magic. But this is presented with fast-cutting, shaky camerawork, pumped-up colours and a barrage of computer-generated effects, some successful (a whirlwind of paper) and some definitely not (CGI characters). The uneven special effects distracted me from the already flimsy story.

Best of the lot is the third story, In The Middle. Directed with a sure hand, from a director of Alone and the superb Shutter, Banjong Pisanthanakun. This is well-paced, well-acted and largely original. Four boys are on a camping trip in the forest, scaring each other with ghost stories in the tent at night and teasing each other about which horror films they've seen, (cue some smart in-jokes). But next day they have a Deliverance-style accident and the trip turns into a nightmare. This was easily the best - well made, scary and didn't insult horror fans. 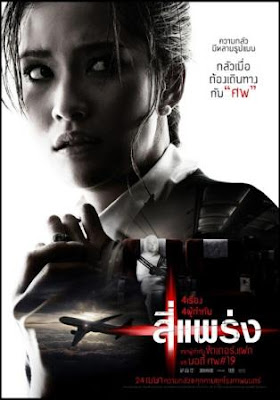 Lastly is Last Fright where a stewardess attends to royalty on a specially chartered flight. But the princess starts ill-treating the attendant and everything escalates rather alarmingly. In the story's mission to scare, logic goes completely out the window in order to create any scares. Like part two, the director cheats the viewer every whichway, in order to get the shocks. The premise of royalty of any country (in this case a fictitious one) hiring a huge passenger jet all for one person is far-fetched to begin with. An appalling CGI plane sabotaged the segment, while the interior set was just about convincing.

So, a mixed bag, above average horror for Thailand, just about good enough as a TV film, OK for DVD. It's an accurate overview of Thai approaches to horror, with some over-familiar subjects. I'd like to see the directors of Dorm and Victim invited to the next batch.

The Malay DVD from Golden Satellite (pictured at top) is non-anamorphic widescreen. The English subtitles were well-translated but non-removable. Any curse words were censored with a silly black blob over the offending words. This could indicate that the gore had also been cut down for Malaysia. Maybe the promised UK DVD release later this year will have more gore (in the second story?).

As I'm still feeling guilty, in the name of balance here's the gushy review that inspired me to write this, and a far more balanced and informative review from Wise Kwai.