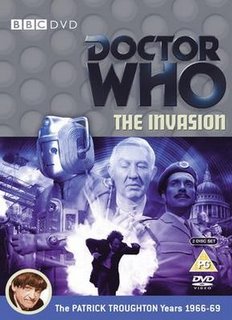 Panic on the streets of London...

I'm enjoying watching this new release of a sixties Doctor Who story starring Patrick Troughton. Two of the eight episodes in this story were very probably lost forever when they were wiped/scrapped in the seventies. Over a hundred other episodes are still missing, but this DVD release proves that all is not lost.

Having hunted around the world, the BBC have decided to use animation, by Cosgrove Hall productions, to recreate the vision for the two missing episodes. This technique was previously used to illustrate special episodes on the BBC website, featuring Richard E Grant as the Doctor, (made before the recent new series started). A trial animation was tested out first (you can view it on the BBC website). 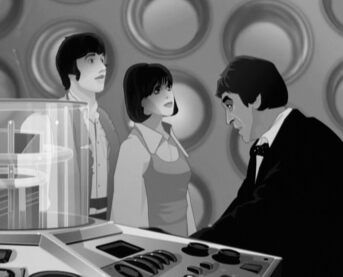 The animation, delightfully rendered in black and white, is obviously not the same as having the original vision, but it closely illustrates how it may have looked, and provides continuity for the surviving episodes. The success of this release will presumably decide whether further recreations will be attempted. 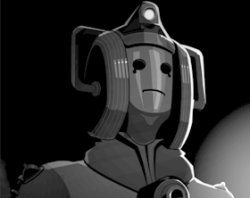 I thought the technique works very well - the episodes at the time were made with many quite static close ups (television sets were fairly small at the time) and far less action, which makes it easier to second guess what was going on.

I believed that the animators would be guided by 'screen grabs' - photographs taken off TVs at the time of transmission. Many of these have appeared online, illustrating entire missing stories in comic strip fashion. But no mention of these photographs were made here on the DVD documentaries - perhaps they don't exist for every episode. Many of these 'photo-novels' are still part of the BBC Doctor Who website.

The best aspect of the venture is the immaculate audio restoration. The audio survives for the missing episodes, largely due to fans recording off-air at the original time of transmisission. A DVD extra illustrates how the best elements are used and restored. All the episodes indeed sound fantastic. 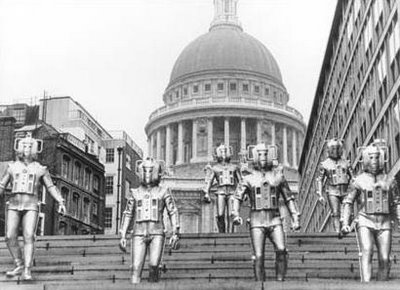 This story features the Cybermen attempting an invasion of sixties London, and is very much a blueprint for the earthbound Jon Pertwee series that followed soon afterwards. The Brigadier and U.N.I.T. (in their debut) help Jamie, Zoe and the Doctor battle a megalomaniac electronics industrialist who is aiding the Cybermen on Earth.

This is a new two DVD set, on release from the BBC’s new merchandising arm ‘2 Entertain’. The DVD extras are interesting and not overlong. A 48 minute look at the making and influence of the series, reveals a large number of the original cast still keen to talk about it. Besides the documentaries, there are some rare glimpses of the characters and crew in colour, in still photographs taken on location.

What’s next? Myself, I’d love to see the two Yeti stories restored (also Patrick Troughton episodes). They are among my earliest TV memories. The BBC have the 'photo-novels' and all the audio recordings...