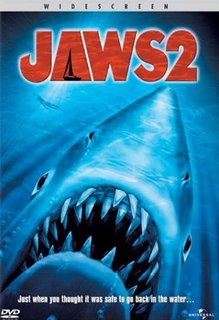 THE SEVENTIES
When I first saw Jaws 2 in the summer of '78, I thought it was good, not great, but good. It reminded me to keep out of the water. Seeing it again now, it’s much more disappointing. The first Jaws was an instant classic, but tried very hard to be more than a monster movie - it also succeeded as a drama and an adventure.

Jaws 2 is mostly a monster movie, and fairly bad otherwise. Not so bad it’s good, but boring bad. The best bits save it though, but only because they had a bigger budget than most monster movies.

Truth be told, most of the low budget Jaws rip-offs were better thought out, and they were released before Jaws 2. Piranha and Grizzly give you a much better deal. Orca The Killer Whale and Italy's Tentacles are enjoyably bad. Then later Humanoids from the Deep was so outrageous, the violence was almost X-rated, and it threw in an Alien riff as well. Alligator had a dry script, I could go on... it's a favourite genre of mine - when animals attack. 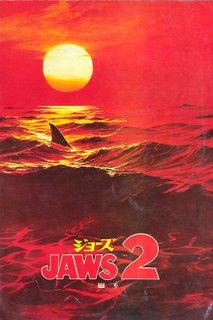 Back cover art from the Japanese cinema brochure

THE FILM
The plot of Jaws 2 is simple, straightforward and almost a dry run for Friday the 13th (which debuted two years later). A bunch of foul-mouthed kids ignore the mad old man (in this case, the police chief) and get picked off one by one in various imaginatively gory ways.

Besides the story, the John Williams score makes you think you’re listening to a Jaws film. The great cinematography means you think you’re watching a Jaws film. In the cast there’s Roy Scheider, Murray Hamilton and Lorraine Gary again but… it doesn’t feel like a Jaws film.
Although director Jeannot Swarc was working in TV at the same time as Spielberg, and directed episodes of Columbo and Night Gallery like Spielberg, it doesn’t make him a replacement for Spielberg.

To be fair, when the action comes, it’s spectacular and convincing. Some of the death scenes are brutal (yet relatively bloodless) and there are some spectacular and difficult stunts too.

But the story is flabby, with many storylines and characters set up, but few dramatic conclusions. There’s no need for so many teenagers, there's lots of romantic possibilities cued in but nothing develops. The Mayor and his town hall committee hassle the police chief, but this just all slows down the first half of the film.

The police chief is acting on a hunch that Amity again has a shark problem, for over an hour of the movie. He could quite easily have got it all wrong, seeing as he has no real proof to go on. Then, suddenly, he gets his proof and instantly rushes to the rescue of the stranded teenagers (even though he doesn't know they are in trouble). But he’s the one person on the island with no sailing or navigational skills, making him the worst man for the job. His growing ineptitude plays as stupid, like hitting his radio and wrecking the police launch. Scheider must have cursed his luck when the script arrived.

Even in 1978, I sensed the film was going to be lacking from the limp opening scene. Two divers get attacked underwater as they discover the wreck of the Orca (a vague link/explanation of the shark's motivations). There's lots of thrashing about and fast cutting, but you don't see anything actually happen. It's not violent, or interesting, it's just a lame plot point.

The slack story is slackened further by several montages of people on the beach having fun and people on the water having fun (backed by jolly John Williams music). In the first film these were funny and ironic, here they just slow down the pace further.

The first 70 minutes desperately needs tightening, up until we get to the fairly taut and suspenseful ‘kids in danger’ third act, the scenes that I always remembered most clearly.

I enjoy the look of the film, especially the beautiful shots of the sunlit sea. I enjoy the action scenes, especially outrageous is the shark (swimming like a homing torpedo) chasing a water-skier, and attacking a helicopter. But like i said, these feel like they were just included to make the posters look good and beef up the trailer. 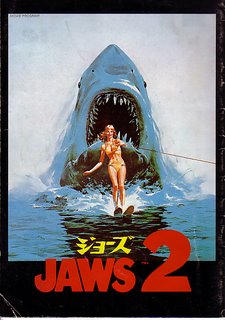 To make the shark look more like a baddy, there's a very silly scene where it has to get hideously scarred (er, like the Phantom of the Opera). A woman who tries to protect her boat by braining the shark with a can of fuel, merely looks like she's pouring fuel over herself. This scene is so poorly staged, it makes her look totally inept rather than panicky.

Also, despite the mayhem, I was constantly distracted by the seventies trend of having many characters wearing tight jeans. The camera seems to catch an awful lot of shots of guys butts in often wringing wet denim, Roy Scheider (in shorts) included. I think a film is definitely in trouble if the viewer gets side-tracked in such a fashion.

THE DVD
Anyhow, the DVD extras are super, indeed the documentaries are more interesting than the film itself. Keith Gordon, one of the few actors to continue with any success (acting in Dressed To Kill and Christine - now working as a director), makes some interesting comments in his own short film. 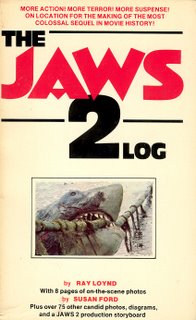 (If you want to know more, there's always The Jaws 2 Log paperback to track down.)

The DVD I watched was released back in 2001, when it was only presented in stereo, with an OK transfer. The film looks good but not great. Let's face it, it still needs all the help it can get.