Horror in suburbia! The cult films from Merton Park Studios 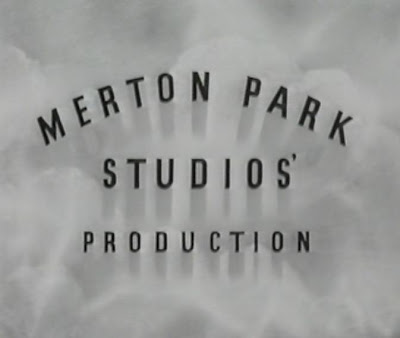 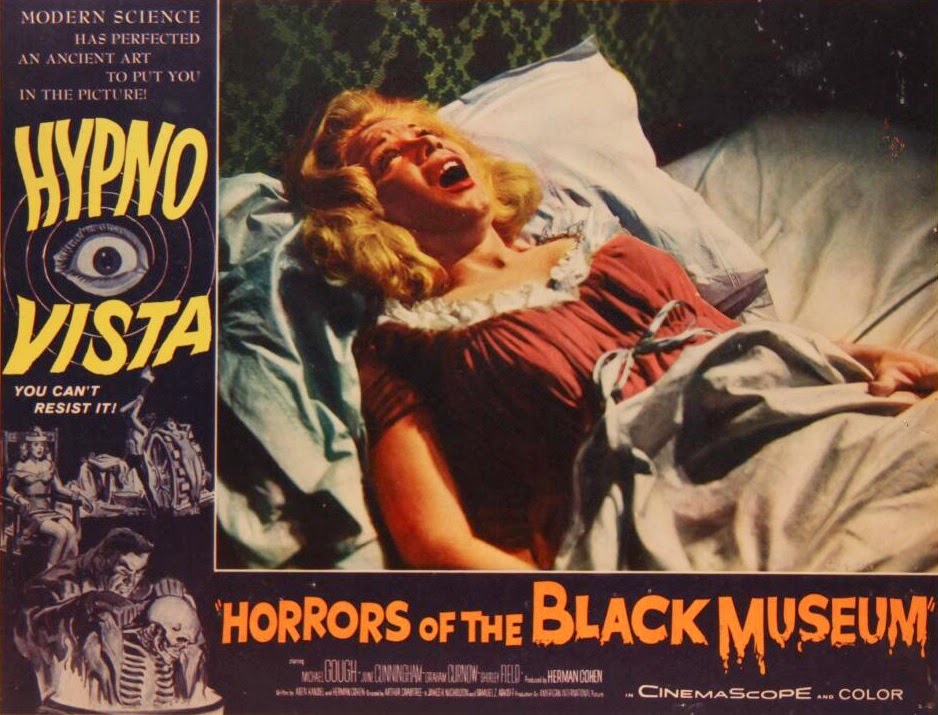 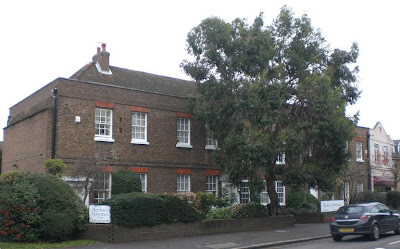 Merton Park had one of the many small suburban film studios spread around the outer reaches of London. They flourished when there was a demand for different weekly movies with full-length supporting B-movies. The government also had a tax incentive that ensured a regular proportion of films in British cinemas had been produced in Britain.

Operating between 1929 and 1967, Merton Park Studios had a long-running success with adaptions of Edgar Wallace crime dramas. But when I noticed the studios' name also cropping up on horror movies, I was excited that a few world-famous cult films had been made locally. Not necessarily 'cult' because they were any good, though! 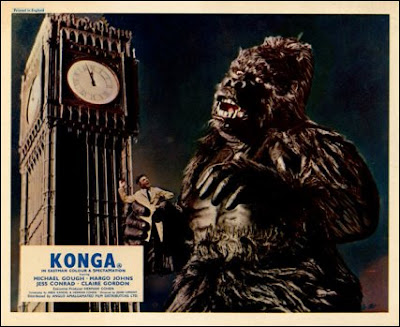 Perhaps the best-known movie to be made here is the King Kong knock-off Konga, which used a 'man in a suit' years before Dino De Laurentiis visited Skull Island. It's a cheap monster movie but great fun for Michael Gough's cruel character and shouty performance. The guy in the gorilla suit is continually hilarious.

Of course, it's a different story from King Kong in that a scientist turns a baby chimpanzee into a giant gorilla (!!?). Konga doesn't climb the Empire State Building, he stands next to Big Ben while the army launch rockets past him. Well, actually Croydon High Street stood in for Westminster. I love the fact that places local to where I live have been seen around the world because of these films. (Full review of Konga here). 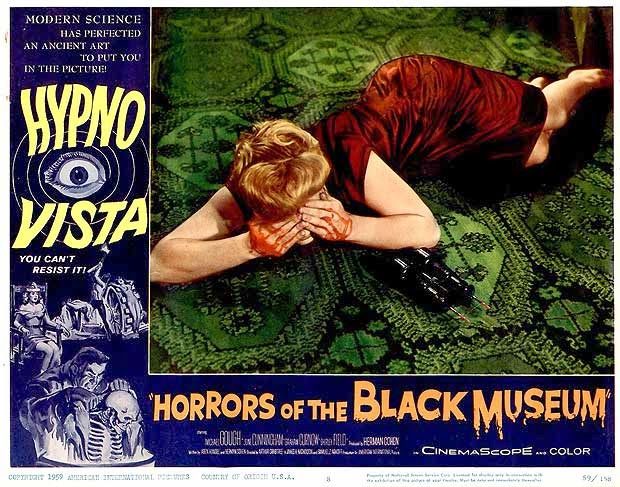 Low-budget producer Herman Cohen (Berserk!, Black Zoo) also shot Horrors of the Black Museum at Merton Park, also starring Michael Gough. It's infamous for the eye-gouging binoculars which caused a stir in 1959, with accusations of 'sadism' from film critics. The story's finale was filmed in South London's Battersea Funfair, just before Gorgo flattened it.

The other horror films shot at Merton Park Studios may be less familiar... 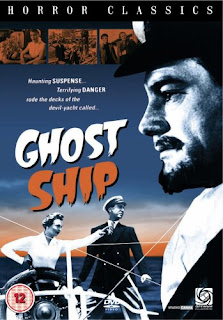 Ghost Ship (1952) is an early drama made at the studios, but with extensive location work. It's an amateurish suburban mystery which pads out the running time at every opportunity. The saving grace is that this is the earliest film I've seen to star Hazel Court - predating even Devil Girl From Mars. Amazingly, it's on DVD in the UK. 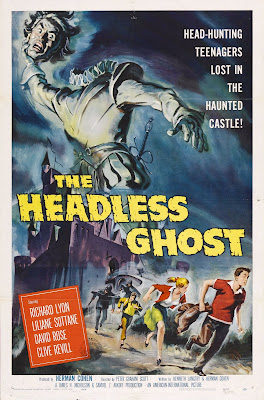 Another B-movie quickie, made to support Horrors of the Black Museum, The Headless Ghost (1959) was also produced by Herman Cohen. Drearily-paced and unfunny, the only saving grace is having a spectral Clive Revill, a twist on his turn as a ghostbuster in The Legend of Hell House. Plus there's an uncredited appearance by Janina Faye (Horror of Dracula, Day of the Triffids). This is also on DVD in the UK! 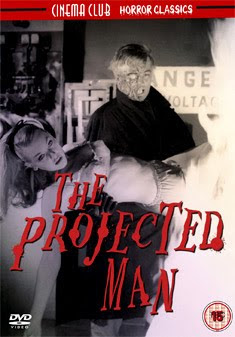 The Projected Man (1966) and Devil Doll both starred Bryant Haliday, who had a short run of leading horror roles (with Curse of Voodoo and Tower of Evil). On DVD in the UK (but edge-cropped to 16:9 - only the UK VHS has the full 2.35 widescreen Techniscope image) 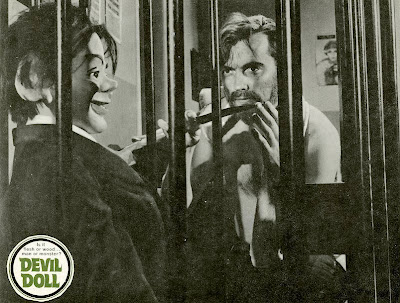 Devil Doll (1964) will only work if you're freaked out by ventriloquist dummies, but Dead of Night (1945) did it better. This is also inspired by Svengali, but John Barrymore did it better. William Sylvester (2001: A Space Odyssey) and Yvonne Romain (Curse of the Werewolf) in the cast help considerably. On DVD in the UK. 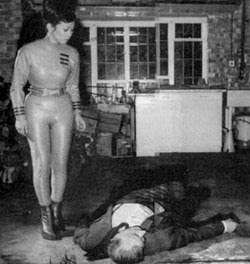 Hopefully the 'hospital' location in Invasion (1965) is still around for me to visit. In the story, the building is cut off from the outside world when two (Japanese?) aliens visit Earth. Invasion is a good example of the 'pub invasion' genre, where Earth-shattering events take place while witnessed from a confined space.

First contact is made with a handful of humans, as opposed to the whole world like in The Day The Earth Stood Still. This scenario is of course perfect for low budgets (see also The Man From Planet X, Devil Girl From Mars, Target: Earth, Night of the Big Heat, and The Earth Dies Screaming). It stars the late Edward Judd of First Men In the Moon, Island of Terror and The Day the Earth Caught Fire. 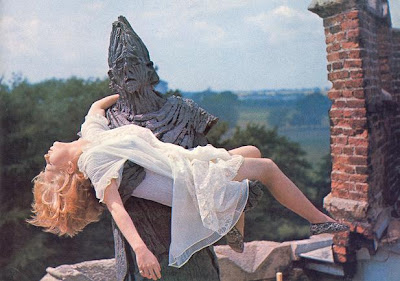 While I'd once rated the golem horror IT! (1967) as one of the worst British horrors of this era, I've actually changed my mind since seeing the recent DVD. It stars the ever watchable Roddy McDowall and Jill Haworth. Full review here. 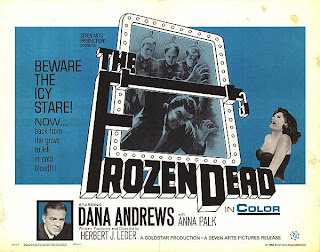 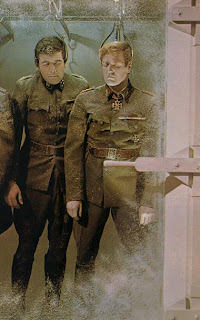 But The Frozen Dead (1966) is pretty bad. Plodding action and a complete waste of a good Nazi zombie idea. Bizarre that a young Edward Fox (The Day of the Jackal) plays a mute zombie soldier. An extensive use of locations makes me wonder whether this was shot after the studios had closed - the interiors look like they might have been locations too. Maybe not as bad as The Blood Beast Terror (a killer moth) and The Vulture (a were-bird). 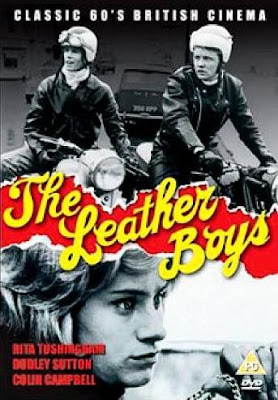 Merton Park's best known non-horror film must be The Leather Boys (1963). A 'kitchen sink' drama set in the South of England for a change. Rita Tushingham (from A Taste of Honey) accuses her new young husband that he'd rather hang out with another motorcycle buddy than stay at home with her.

The original book was a little more explicit at hinting at the relationship between Colin Campbell and Dudley Sutton's characters. The movie is affectionately heralded for its snapshot of many bygone London locations, including bikers' hangout, the Ace Cafe, which is still there today. 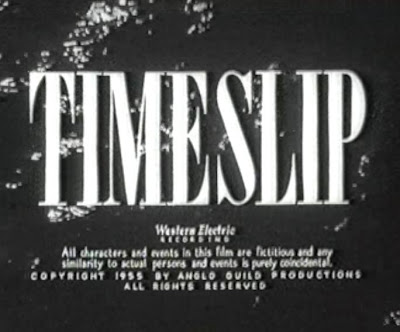 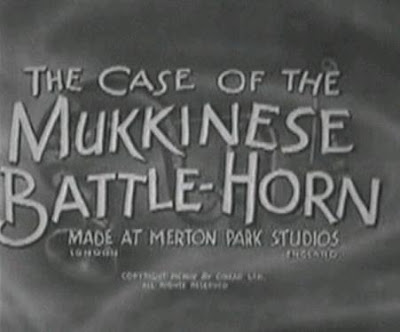 The Case of the Mukkinese Battle Horn (1956) is only twenty minutes long, but deserves a special mention for the blossoming talent that it captured. There's an early multiple role for Peter Sellers (Dr Strangelove, The Pink Panther) as well as an early producer's role for Michael Deeley, long before he made The Italian Job and Blade Runner.  It's also the best visual record of the influential humour of The Goons radio show. This short but very funny film is the rare jewel in Merton Park Studio's filmography. For a full illustrated review, follow the above link. 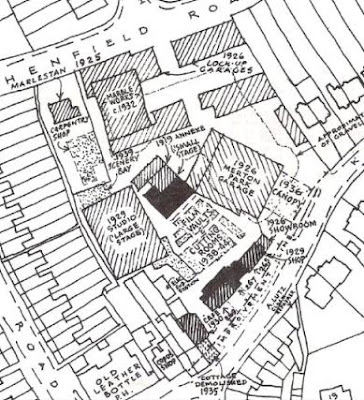 This week, I visited the only building still standing from the studio complex. The Long Lodge (the long black building near the bottom of the map) was used as the studio's headquarters. The neighbouring Leather Bottle pub, (at the bottom left of the map) is also still around. The lodge can be found on the Kingston Road, opposite a small parade of shops between Raynes Park and Wimbledon, and has two commemorative plaques outside (pictured) which I feel rather sells it short. 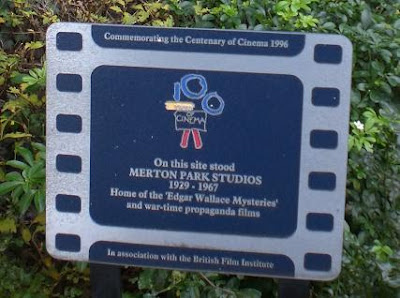 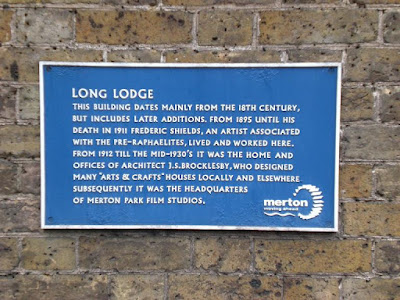 For more information, here's a recent article by movie expert Tise Vahimagi, about the Edgar Wallace thrillers that were shot at Merton Park Studios.

The British Movie Forum has a short thread about the studios, through which I found the rare floor plan.