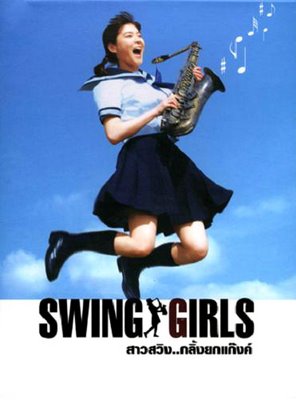 I'll swing for you...
I don’t make a habit of seeking out feel-good comedies, but I try out Japanese and Korean ones because they still feel more different and original. For the record, I haven't seen a good Thai comedy yet - the ones I've seen are like bad seventies Benny Hill sketches.

Swing Girls is charming, carefully crafted and well observed. It’s funny, but not subtle, but not crude either.

Imagine a film made in the west where a guy forms a band that’s just made up of schoolgirls and there NOT being any jokes about sex. I sometimes worry that the teenage characters in Japanese films aren’t portrayed as being interested in sex (anyone who is is called a "pervert"), and they only ever build up to talking about romantic involvements – and nothing more.

I’m guessing that this is what Japanese society wants teenagers to think about, rather than what they actually do think about. It’s very rare for Japanese films to portray teenagers having sex or sexual problems - I can only think of All About Lily Chou Chou as a recent example - it was a brutally honest and rather bleak look at loneliness and the extremes of bullying. Am I over-generalising about the Japanese? I tend to generalise too much, generally speaking. 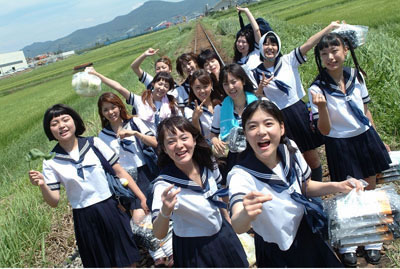 I digress, Swing Girls is a character-based comedy with an easy to understand humour and a keen eye for sight gags.

The plot is very slight – a group of underachievers have to understudy the school brass band but end up forming a ‘big band sound’ jazz act. The motivation in the middle act is a little foggy, as I wondered why the girls were working so hard to keep the band together when they were no longer being forced to. But the story finds its way again storming towards a predictable but enjoyable climax.

Many of the gags defy logic, for example the band often reacts as a group, rather than as a group of individuals. But this provides a successful and visual string of sight gags.

The film is beautifully observed and photographed, peaking with an innovative, unexpected, visually elegant scene where the gang get attacked by a large wild boar!

Obviously, the soundtrack is filled with uplifting big band swing music, which is presented as a rare innovation that the kids introduce to the old fuddy-duddies, who are hooked on boring school band tempos. 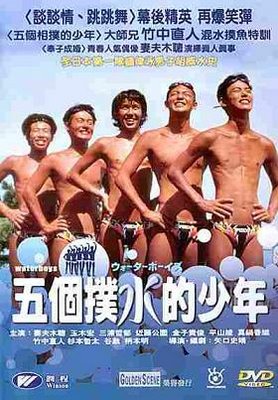 Non-threatening Waterboys (the Hong Kong DVD)
This isn’t an original premise of course, mostly a female twist on Waterboys (2001), also written and directed by Shinobu Yaguchi. The recent hit comedy, about an all-male synchronised swimming team, also spawned a Waterboys series on the Fuji TV network.

Again the theme was that anyone can achieve any goal if they work really hard, despite facing an impossible deadline. Sounds very much like the Japanese salaryman work ethic to me.

Like Waterboys, Swing Girls also stars Naoto Takenaka as the teacher who turns them around – probably the only recognisable face in the film, he seems to specialise in very physical performances, such as in the fantasy films Hiruko the Goblin (1990), Sakuya - Slayer of Demons (2000), and the recent Yokai Monsters.

Unusually, the Japanese DVD has English subtitles – this seem to be more likely on dramas and comedies, but as usual it’s quite expensive compared to other countries. The Hong Kong DVD has English subs, and the Thai DVD which I watched (cover art at top) had very good, well-translated subs which seemed to capture most of the humour in the dialogue.
- - - - - - -
Posted by Mark Hodgson at 4:35 pm