With Duran Duran's "Girls on Film" as its theme tune, we're immediately plunged back into the atmosphere of the excesses of the eighties, (even though the story is set in the near future).

Opening with an orgiastic scenario out of Eyes Wide Shut, freelance photographer Saiga infiltrates a secret club for super-rich V.I.P.s, and discovers everything is for sale - sex, pain and your darkest fantasies made real. By accident he discovers the secret of 'the Goddess' and then things really kick off...

Kinky, blood-spattered, debauched - with a fast-paced story and some killer characters (you won't see many female detectives dressed like Ginza), this has very original action scenes and a wicked sense of humour - fun!

There's not many anime with regular gay characters in (albeit eighties stereotypes) or fight scenes with drag queens. There's also not many series that run to 24 episodes without any padding - but Speed Grapher rips along, it always seems to be moving, plot-twisting, or fighting.

The imaginative and genuinely scary, genetically self-mutated assassins in Speed Grapher make the X-Men look like Dennis the Menace. Imagine if your dentist turned into a giant spider-thing and each of his legs had a drill built into each foot..

Animation house Gonzo makes the future look sexy and the baddies look demonic, and it's in widescreen too. Can't wait to see their upcoming adaption of the classic Dario Argento horror film Suspiria... 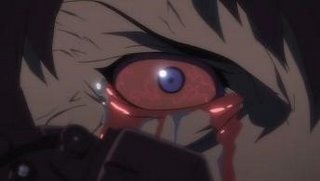 More Speed Grapher screengrabs and a heap of spoilers at Memento, here.

Here's the Japanese SPEED GRAPHER title sequence on YouTube, with the Girls on Film music (which will apparently not be used on the western DVD releases), and without the title captions...