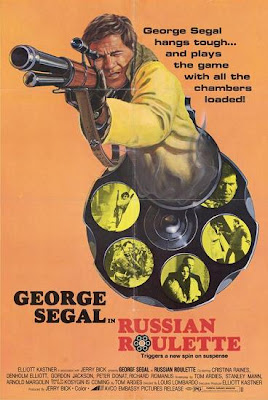 
George Segal plays a disgraced policeman caught between the KGB and CIA during a Canadian visit by the Russian premiere. What starts off as a simple undercover operation grows into a very messy assassination plot. Being a mid-budget mid-seventies thriller, there's naturally helicopter action, a car chase and stunts galore. In fact, so much is going on in the finale that it starts getting ridiculous.

Russian Roulette isn't a must-see, but there's plenty to recommend. It played well on TV for a while and I've yet to tire of it. Having first seen it in the cinema on a double-bill with Diamonds in early 1976, I've tracked the whereabouts of both films ever since. Diamonds, starring Robert Shaw and Richard Roundtree, has earned a DVD release as well as a CD of Roy Budd's soundtrack. 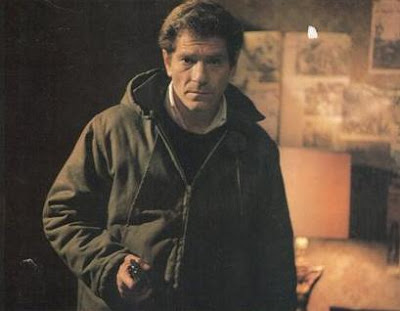 George Segal is now better known for comedy, particularly the TV show Just Shoot Me. But in the 1970s he mixed humorous roles (The Hot Rock, the original Fun With Dick and Jane) and tough guy leads (The Terminal Man, Rollercoaster). In Russian Roulette, it's a happy medium.

Co-star Cristina Raines is the token female sidekick, though she has a standout moment in her fight scene... Her movie work peaked in the seventies when she was going out with Keith Carradine. Which I'm assuming had something to do with her roles in Robert Altman's Nashville and Ridley Scott's first feature The Duellists. In 1977, she starred in the poor taste Michael Winner horror The Sentinel.

In contrast, Louise Fletcher (Brainstorm, Exorcist II, Invaders From Mars) has little more than a bit part, as a switchboard operator for the mounties! This was the same year as her Academy Award-winning Nurse Ratched in One Flew Over The Cuckoo's Nest! 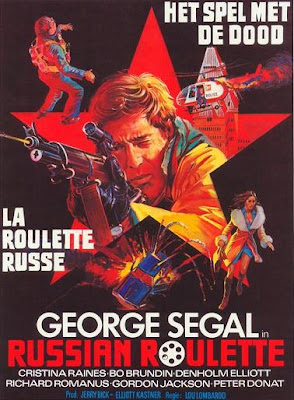 Best of all, Denholm Elliott (Vault of Horror, The House That Dripped Blood, To The Devil... A Daughter) plays a consistently seedy CIA operative. When he's not nicking cigarettes and blagging drinks, he's lying through his teeth with the two-faced smile he does so well.

Director Lou Lombardo indulges the cast to throw in improvised dialogue to add to the realistic feel. The best example is a scene where Segal tries to get an old lady to remember a really important message. The worst is his throwaway line to a traumatised Raines in the middle of a car chase, "How do you feel, killing a man?". Sometimes his comedy touch makes the film a little lighter than the subject deserves. 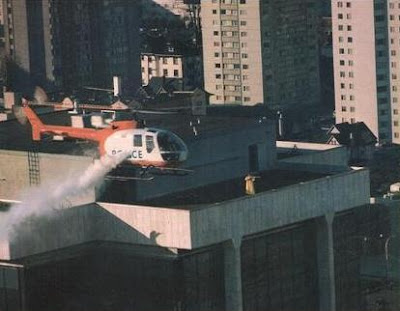 It looks mostly, if not entirely, shot on location in Vancouver. The grand Hotel Vancouver takes the centre stage for the climax, with some excitingly shot low-flying helicopter action. Ah, the seventies...The music sounds a little like Roy Budd (Get Carter, Fear Is The Key) but it's Michael J Lewis (Theatre of Blood, 11 Harrowhouse, The Legacy). Instead of Budd's trademark sax, Lewis favours electric 'wacca wacca' guitar to ramp up the car chase excitement. Extensive reworkings of the Soviet national anthem form the majority of the score, but it's still a soundtrack I'd happily buy. 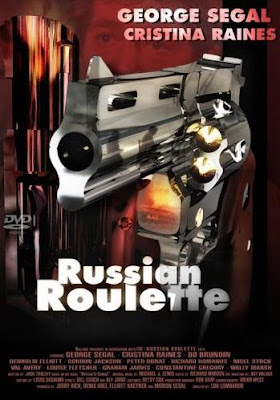 While other, less exciting Canadian thrillers of this period get DVD releases (yes you, The Kidnapping of the President), Russian Roulette is still trapped on VHS. Germany has a full-frame DVD (with rather generic cover art) but no English subtitles or soundtrack - that's dubbed German audio only. Not good enough to keep it off my not-on-DVD list!

There's another positive review on the Permission To Kill spy movie site. Hopefully proof that it's not just my nostalgia talking.

Oh, and no-one actually plays russian roulette in the story, in case you were expecting it...

Email ThisBlogThis!Share to TwitterShare to FacebookShare to Pinterest
Labels: 1970s, action, Canada, NOT ON DVD, UK