I've always been fascinated with visions of the afterlife. Having seen some mysterious and spectacular stills, I first sought out the Hollywood versions of Dante's Inferno. Both the 1924 silent movie and the 1935 Spencer Tracy vehicle included tours of the seven levels of Hell according to Dante, visually lead by the intricate engravings of Gustav Dore (whose engravings lent themselves perfectly to black and white cinematic recreation). The 1935 version is worth seeking out for the five minute descent into hell - envisioned using large sets, cavernous models, matte paintings and dozens of half-naked extras.
Incidentally, a new Hollywood remake of Dante's Inferno is about to be unleashed - but this time it's a comedy... It stars Dermot Mulroney as Dante and James Cromwell as his guide, Virgil.

I've searched for films which attempt to depict a different kind of Hell... this time according to Buddha. Three of them Japanese, called Jigoku, only 2 of which I've seen, and a recent Thai remake, called Narok, which also translates literally as Hell...

This is a classic Japanese drama that is practically an arthouse classic, due to its expressionistic underworld sets and earnest acting talent. The first hour sets up a dozen sinners in a rural town, specifically a young man being lead into temptation by an old school friend.

The second hour demonstrates how each sin will be punished in the afterlife - a guided tour is provided by the ruler, Lord Enma. The various areas of Hell are depicted by large apparently wall-less sets (the edges disappear into darkness) and dozens of extras playing the doomed. The strictest of punishments involve being sawn in half while laying face down, or worse still, being flayed alive all the way down to the bone. These bloody make-up effects would have been very strong stuff for 1960, especially since they're in colour.

One scene shows dozens of people buried up to their necks, leaving only a garden of heads visible - this reminded me very much of a similar Hell tableau in What Dreams May Come. I'd highly recommend this 1994 Vincent Ward film for its strong story, as well as it's spectacular visions of Hell, and rare visions of Heaven too.

The 1960 Jigoku is interesting for seeing the differences and similarities in cultures, but is less compelling as a dramatic storyline. Despite its excesses, Hell here is merely stressful rather than frightening.

UPDATE 3rd March 2007 - SciFiJapan has an extensive review, posters and screengrabs from the 2006 Criterion Collection DVD release of this version of Jigoku.

I've not seen the 1979 Japanese remake, but I suspect that the 1960 one was the best, and had the biggest budget. The 1999 Jigoku verges on trashy. Directed by the late Teruo Ishii (Horror of Malformed Men, 1969), it primarily deals with the perpetrators of the 1995 sarin gas attack on the Tokyo subway. We see the cultists plotting and executing the attack, then suffering for their deeds by various punishments, including the customary flaying. 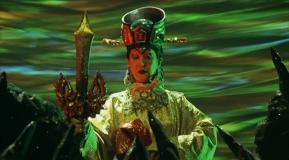 The film is held together by Lord Enma (here played by an actress) approaching a young cultist in Shinjuku and warning her of what could happen to her. Unlike in 1960, we quickly move to Hell early in the film - but it's a tiny set with painted walls, a handful of extras, and only a few demons with inexpressive masks on - the monsters look more like 1960's Ultraman cast-offs. Also the gore looks unconvincing and home-made. The film seems more preoccupied in showing topless girls and unconvincing sex scenes. It also looks like a sly way of restaging and exploiting the sarin gas attack story without identifying the film as such.

For me, it didn't feel like Hell at all, and if you want to learn more about the gas attack, there was a good Channel 5 documentary on recently whose reconstructions were far more convincing - they also talked to survivors of the incident and related why and how it happened.

Thankfully, the story has been taken more seriously by a new film from Thailand (a remake of the Japanese Jigoku) and is out now on DVD. Obviously it's an ambitious project and no budget can do Hell full justice, but it's certainly closer to depicting somewhere you really don't want to go - and that, I thought, was the whole point.

Here, a minibus crash sends a group of friends into the afterlife. Through flashbacks we see what sins they've committed, then we see how they are to be punished. Again, Thailand is a sincerely Buddhist nation, so off we go again to Buddhist Hell... 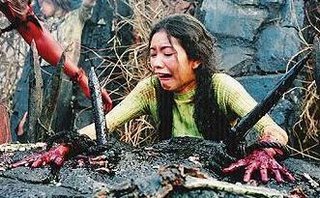 This initially looks like a wasteland of torture - endless bodies being physically set upon by barbaric demons armed with a variety of simple weapons. Again there's the sawing in half, but here the flaying looks almost real... people being bludgeoned with large wooden mallets, stabbed with spears... the punishments seem to be everywhere. Is there no escape?

Instead of sets, outdoor locations are used, but with digitally altered skies to notify that we're seeing a different world. This is a less subterranean vision than the other films, but it's still claustrophobic, because the pain is everywhere - even when the group try to escape they only encounter other tortures. 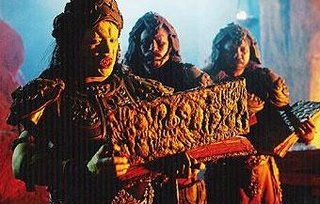 The demons who police the suffering are almost-human barbarians. They look convincing and obviously enjoy their work. The special make up effects are successfully gory and mostly work, except for a couple of digital dismemberments. Other SFX like the "dimension gates" - huge tornadoes that carry people from one plane of existence to the next - look digital and fakey, but are spectacularly imagined.

All in all, I found this Thai Hell the most compelling. The tone was consistently grim (reminding me somewhat of Cannibal Holocaust - there too, the characters were documentary makers) until a little unwelcome comedy relief breaks the mood halfway through the film. The ending feels a little rushed and, obviously, some of the sins don't seem to warrant the outrageous tortures meted out later. But this film fits nicely into the new wave of slasher films from Thailand (like Scared and Art of the Devil) as well as the new brutality of Hollywood horrors like Saw, Wrong Turn and The Hills Have Eyes.

At present the film is only available on DVD and VCD from Thailand, but without english subtitles. The 16:9 anamorphic widescreen picture is a slightly cramped representation of the original 1.85 cinema aspect. This PAL region 3 DVD (pictured) has a trailer and a brief behind the scenes package included, as well as poster and design art. But, I'm sure the online publicity photographs alone will get this film a wider release soon.