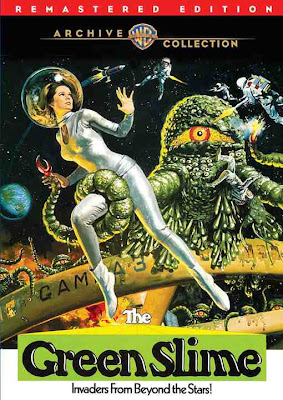 There was something of a geek-frenzy when this debuted on DVD last year, so I'm sure you know about this already. But I couldn't not have Green Slime somewhere on these pages. 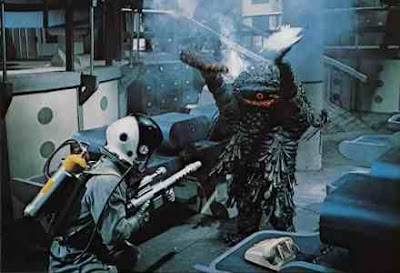 A one-eyed, tentacled monstrosity unafraid of a spaceman's raygun. Even as a black and white photo in A Pictorial History of Horror Movies, this was already one of my favourite movie monsters. But it was twenty years before I saw it in action on a Turner movie channel. It's been another fifteen years before this widescreen DVD release from Warner Archive. I think they've been surprised at quite how popular the response has been to this nutty monster movie, proving there's gold in them thar archives... 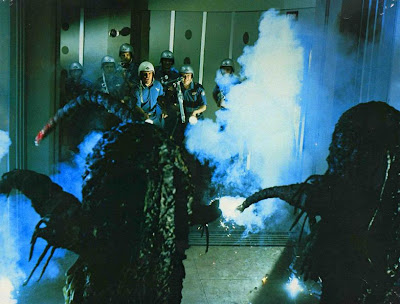 The story predates several familiar sci-fi action films. A space probe lands on a distant asteroid and unwittingly picks up a parasite that multiplies tribble-like when the probe docks in Earth orbit with a military space station, (the flimsy-looking Gamma 3). As the aliens' number increases, the space soldiers have to fight this bizarre deadly menace both inside and outside the satellite station... 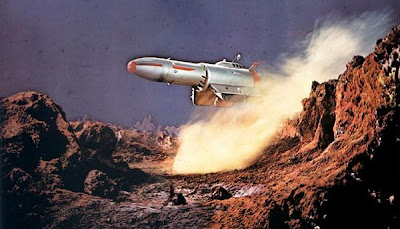 The Green Slime begins by scampering through the plot of Armageddon (1998) in under thirty minutes - with a desperate mission to save Earth by landing on the asteroid to plant explosives. 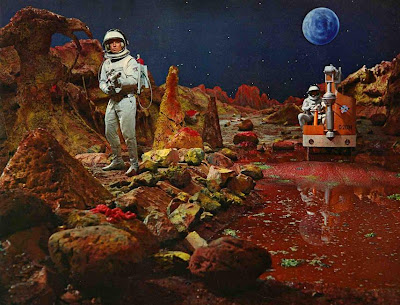 The story then morphs into Alien as one of the demolition crew unwittingly picks up a strange slimy lifeform. It then shifts into Aliens as the soldiers have to tackle the multiplying threat in their orbiting base. 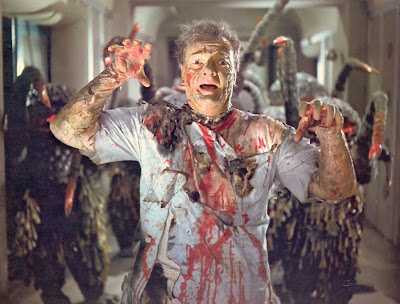 Originally an adult-only 'X' certificate in the UK, there's little here that would scare the average Doctor Who fan, but its generous with bloody make-up jobs and close-up electrocutions. It's the super-serious acting when faced with rubber monsters and furious pacing helps make this so enjoyable. 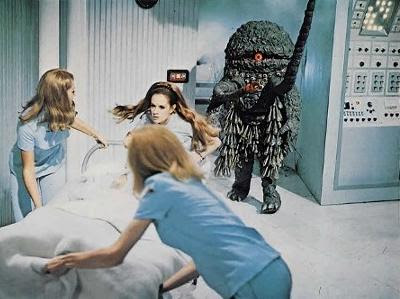 The aliens' blood is dangerous, as are their electric tentacles, but these monsters often look far less threatening than their publicity photos as they casually stomp around.

The tempo of the soundtrack rarely accelerates beyond weird space atmospherics - a fast-paced action theme would really have helped the frantic (and bizarre) outer space battle. The most memorable music is of course the blistering acid rock theme, belting out the immortal chorus "Greeeeeen Sliiiiiime". 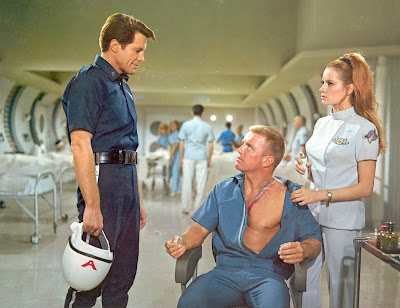 This was an unusual Japanese/American hybrid production, with a solely western cast (the only Japanese actors are inside the monster suits). Richard Jaeckel (Grizzly) and Robert Horton are a treat to watch, butting heads over Luciana Paluzzi (Thunderball) who has little to do besides add a ton of glamour. While Jaeckal adds gutsy realism to his heroics, Robert Horton plays an incredibly bullish commander, consistently and unpleasantly pulling rank. 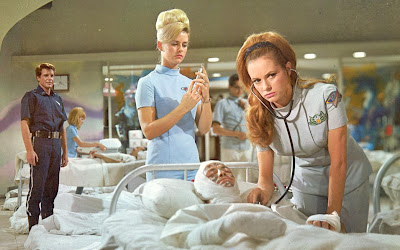 With no Japanese actors, and substandard model work (the space rockets, satellites and launchpad all look tiny), there's really little to betray that this was filmed in Japan. Made by Toei Studios, the director was no less than the Kinji Fukasaku - the genius who gave us Battle Royale (2000). 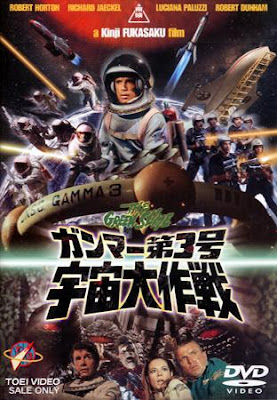 The Green Slime has been available widescreen on laserdisc and DVD in Japan, but the Japanese version was 15 minutes shorter than the US, Japan opting to prune back the dialogue scenes to keep the action moving. Added to this, the Japanese home video releases didn't have English subtitles or language tracks, despite totally being filmed in English. Released at the end of 2010, the new Warner Archive DVD (pictured at the top) is special for being digitally remastered, and for making the 2.35 widescreen of the US cut finally available. For years, The Green Slime has been seen on TV (and VHS) as a cramped 1.33 pan-and-scan version, making the space battle climax a confusing mess. Well, even more of a confusing mess.

I'm still a little nervous about shelling out full price for a DVD-R. Hopefully Warner Archive's best-sellers will eventually get normal factory-pressed DVD releases. Maybe even special editions? But for now, I'm just thankful it's been remastered, and I had the chance to see it properly.

If the trailer doesn't make you want to see it, you're already slimed...