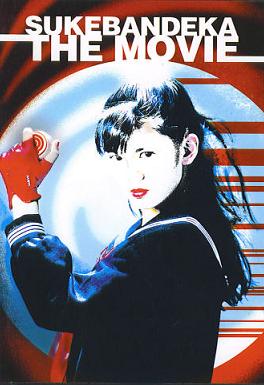 She's the Schoolgirl Special Agent with a deadly steel yoyo!

This is ridiculous, but an awful lot of fun. I thought I was just going to watch a movie. Once again there was homework to be done. Sukeban Deka, according to Wikipedia, translates as something like “delinquent girl detective”.

I also didn’t realise Sukeban Deka was a franchise, rather than a pair of stand-alone movies…

Watching it, I felt that I was missing something, plotwise. All the characters seemed to know each other and I didn’t know why. There were flashbacks, too. That’s because this movie followed on from two TV series. Seeing as we’re unlikely to see the TV series, you’ll need to know this before the first film…

Sukeban Deka - The Backstory
What I needed to know before I started watching was... that the Japanese government were training delinquent schoolgirls to become special agents, giving them weapons disguised as stuff you’d find in a satchel (like yo-yos) and training them to fight (with sharpened fingernails or glass marbles). After a year (or a series) of hazardous missions, Sukeban Deka 2 has resigned and separated from her chums…

Sukeban Deka - The Plot
Asamiya Saki has forsaken her special agent status and has re-entered normal life. She accidentally bumps into a young man trying to escape some thugs and decides to help him. He’s escaped from Hell’s Castle (!), a madman headmaster, Hattori, is trying to brainwash young students into helping him stage a coup d’etat (shades of Yukio Mishima). She reforms the gang and asks her old boss for her weapon – the deadly steel yoyo. Taking on a helicopter gunship (with her yoyo) and teaming up with the newly-appointed Sukeban Deka 3, Saki and the Red Rangers have to storm Hell’s Castle to stop the villain. Luckily she’s been given the Ultimate Yoyo…

Sukeban Deka - The Review
A nutty set-up like this, playing like a low-budget remake of Enter the Dragon with schoolgirls, is nothing but fun all the way. You have to cheer when the heroine finally swaps her nasty cardigan for the schoolgirl uniform. You suspend your disbelief as the girls defeat armed guards with yoyos and marbles. You gasp when you see The Terminator so blatantly ripped off.

Released in 1987, it looks like it was made in the seventies. Grainy film stock, lots of location shooting, helicopter action, poor model work and a TV cast. The only thing that dates it is the electro eighties pop songs, also sung by the actress who plays Saki. The rest of the soundtrack is repetetive, catchy and over-the-top.

Toei studios made two films around the three TV series. Director Hideo Tanaka keeps the action moving along briskly, riding roughshod over logic, but getting the girls to look as convincing in action as possible. Yoko Minamino, as Saki, performs most of her stunts and does much of her own fighting (and yoyo work). She’s a real find and it’s no surprise to learn that she’s still working as an actress today.

The chief baddie, Hattori, is cleverly underplayed by Masato Ibu, who recently starred as the head Xillian in Godzilla Final Wars. He was also in Azumi and Spielberg’s Empire of the Sun!

Sukeban Deka - The DVDs
The two films are out in the US from Tokyo Shock. Sukeban Deka - The Movie (pictured above) also includes trailers and a marvellous behind-the-scenes TV programme that looks like it could have been made yesterday. The lead actress Yoko, is honest about her worries and stress about carrying a movie, and we see her bravely performing stunts as well as singing the theme tune!

Besides the sequel, there is also a 1994 OVA anime of Sukeban Deka, available on Region 1 DVD. The 3 TV series are all out in DVD boxsets in Japan, but without any English subtitles.

If you'd like to learn even more about the phenomenon that is Sukeban Deka, check out this superb fansite for screengrabs, guides and lots lots more...

But the latest news is that YoYo Girl Cop is the name of a new movie remake, in the pipeline for next year! Twitch Film have reported that this new adventure is on the way! Check the link out for more details, teasers and the new poster.