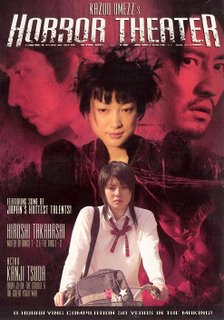 Having watched Snake-Girl and the Silver-Haired Witch, I’ve been learning a lot more about the manga artist Kazuo Umezu. This TV series ambitiously marked 50 years of his horror stories.

Ever since TwitchFilm first showcased the Japanese release of Horror Theater last year, I’ve been looking forward to it. They posted trailers for each episode, which had catchy backing music (by Rurutia) which turns out to be the series theme tune - images of Kazuo Umezu himself superimposed over some of his grisly illustrations.

At last, all six one-hour episodes have been released on Region 1 DVD, two per DVD. I’ll just mention that despite the similar titles, these DVDs are not to be confused with the J-Horror Theater series of films (released in the US as Infection, Premonition and Reincarnation with a fourth on the way).

Having watched volume 1, the images and atmosphere are still sinking in. They weren’t as graphic as I was expecting – this isn’t schlock horror, it’s more psychological horror that sometimes lapses into the extreme.

Also, like most Japanese drama, these are made on video – a very unusual medium for Western horror fans to get into. The ‘TV look’ combined with the exceedingly slow pace could easily disappoint. The horror elements are almost sleight – it’s more like creepy drama, than horror theater!
HOUSE OF BUGS
There’s some heavyweight names onboard for the first story, headed by director Kiyoshi Kurosawa, who brought us the eerie Kairo (Pulse in the US). His latest film Loft, is almost upon us. He cast a regular collaborator Hidetoshi Nishijima (Loft and Casshern) in the lead as Renji and the beautiful Tamaki Ogawa as Ruiko (who dazzled me as the daughter in Samurai Fiction SF Episode 1).

Plotwise, a young husband appears to be cheating on his wife, he thinks she is having an affair with her cousin. She retreats to a large upstairs room covered in cobwebs, and is willing herself to become an insect, just like the character in Kafka’s Metamorphosis…

House of Bugs is an impressively constructed tale, flashing forwards and backwards in time as well as dodging between different character’s viewpoints. It’s beautfully acted and slowly builds to a creepy dream-like climax.

The episode is impressive in many ways. And works on several levels, as it was intended. The brief CG special effects aren’t totally realistic but certainly work for the piece.
DIET
Diet is less successful, I think, because it’s a much more simple story, perhaps too lightweight to carry a whole episode. At least it takes us to a poorly explored area of horror (or even drama), appetite and body weight.

Dramatically it makes an impression – Tomoko is a schoolgirl who blames her lack of luck in love on her weight. She has a distorted view of herself when looking in the mirror, and keeps misreading the bathroom scales. Tomoko’s mother keeps on feeding her up, while her best friend starts homing in on the boy who dumped her…

This was a very unusual drama, but once the stage had been set, didn’t seem to develop enough – it certainly didn’t lead me to understand the horrifying climax. That seemed to come out of nowhere – perhaps if I watch it again…
DVD
Anamorphic widescreen, good english subtitles. The extras are good – behind the scenes footage from both stories - showing the producers getting their ritual blessing from a Shinto priest (this happens on most Japanese productions, to ensure success), we also see a sprightly Kazuo Umezu turning up on set, to the delight of the young actors who all seem to be fans.
Besides shooting the locations, we also see some of the special effects work. There are also trailers of all six segments - it looks like the horror-heavy episodes are still to come. There’s also a brief word from Umezu about the themes of these two stories.

The Horror Theater series is brimming with potential, so I’ll stick with it and watch the rest. But I won’t recommend this particular DVD title for horror.

From the two remaining DVDs, I’ll be expecting more manic stories and more graphic horror, to be able to capture the distressed tone of Umezu’s original manga.