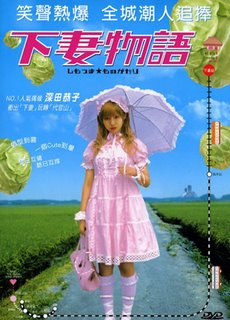 Truly bonkers, both visually and plotwise, this Japanese comedy crosses Clueless with The Odd Couple

I say Clueless because the central character pretty much puts style and decorum over anything else - Momoko is an offbeat 20 year old who dresses 'Lolita-style' in frilly dresses befitting a six-year old's party outfit. Due to her hopeless father's defection from the lowest echelon of the yakuza, she lives a good 2-hour journey away from her favourite dress shop in Tokyo. In order to fuel her outrageous outfit habit, Momoko decides to sell off some of her Dad's old fake designer wear. Enter prospective buyer, Ichigo, a trashy biker chick (well, she's more of a scooter chick, really) who's happy enough wearing clothes from the (gasp!) supermarket. An unlikely friendship begins, resulting in a series of off-beat adventures.

It's a frothy comedy, but with headbutting. It's very Japanese but you don't need to know that much about Japan - gangsters, track-suits and stupid haircuts are surprisingly universal themes! Unlike American teen-comedies, there are few references to sex, despite the characters both being 20 - the humour is so polite that there's not even any lesbian jokes aimed at the biker chicks. It's still sufficiently bizarre and violent to engage, though.

Although it looks like it's shot on video (my guess is High Definition), Kamikaze Girls belongs in the cinema, with its flamboyant visual style constantly flashing back to the characters' pasts. Eye-popping animation also tones down the violent excesses of the biker gangs, punctuating the film in much the same way Tank Girl did, if you'll excuse the comparison. 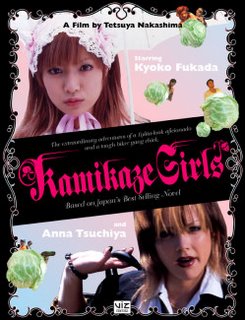 Kyoko Fukada nails the part of Momoko perfectly and ably carries the movie, making asides to the camera when people around her break her rules of etiquette. I look forward to rewatching the Japanese Ring 2 to see her in something different. Newcomer Anna Tsuchiya rises to the challenge of playing bad girl Ichigo, but while she may be extremely rude for a Japanese audience, she doesn't fully convince that she's really that tough. Her character is still an awful lot of fun, and I look forward to seeing the actress in her following film, the cult classic A Taste of Tea.

Comedian Hiroyuki Miyasako plays Momoko's useless father - the following year he landed the pivotal role (as Sada the reporter) in Yokai Daisenso (2005). Sadao Abe starred in the same film (as the marvellous Kappa) but here plays the ludicrous love interest with a D.A. haircut that could take your eye out. Boy, does he think he's cool. Abe is a creative chameleon of an actor who seems to maximize the potential of any of the surreal roles he's given. He keeps turning up in my favourite Japanese films, Uzumaki being the first I saw him in.

Anyhow, this DVD from Hong Kong (pictured top left) has a great set of removable English subtitles, that ably capture the humour of the dialogue. The Japanese audio is optionally presented in DTS, and the picture is anamorphic, for those of you with widescreen TVs. Strangely, the DVD is no-frills, which is ironic considering the frilly nature of the film.