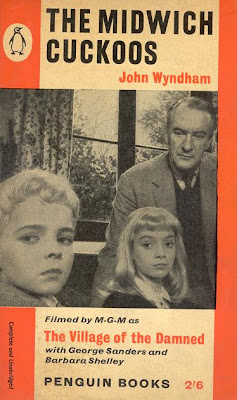 One of Britain's most influential sci-fi authors John Wyndham had the advantage over his rivals in that he didn't sex up his novels with raunch and violence, meaning that his readers could include children. Indeed, Chocky was adapted for children's TV (in three series, starting in 1984).
His global disaster stories The Day of The Triffids and The Kraken Wakes, like HG Wells, have no child characters but are tame enough for younger readers. Strangely The Kraken Wakes has never been adapted for TV or film.
The Midwich Cuckoos was twice adapted as a movie, renamed Village of the Damned. It spawned an excellent sequel in 1964, Children of the Damned. The remake was directed by John Carpenter in 1995, known for his love of British sci-fi. 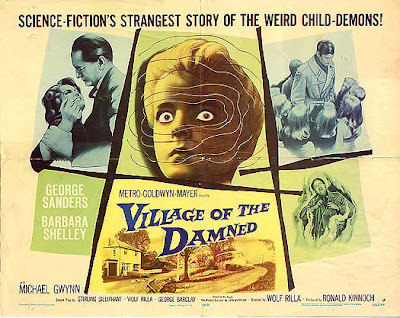 My favourite is the 1960 version starring George Sanders, Barbara Shelley and Michael Gwynn. It's an understated movie, shot in black-and-white. From the very start, it's unsensational, allowing viewers to imagine the worst, and to work out many of the horrible implications for themselves. This is also the movie's strength. There's violence too, also (mostly) left to the imagination, but still powerful enough for a creepy experience. That can't be said about the remake.

The story begins as all the villagers of rural Midwich mysteriously, suddenly collapse. Even the animals. The phones go dead, the village is cut off from the world. Fearing that the cause is gas from a nearby military exercise (echoes of The Crazies), the army moves in to investigate. But it can't be gas, because the phenomenon has a fixed boundary.

Four hours later, it ends as suddenly as it began and is almost forgotten until a couple of months later, when all the women in the village discover that they are pregnant, even the ones whose husbands were away at the time. Happiness gives way as the phantom pregnancies bring a quiet misery to the village. The babies are all born sooner than expected but everyone tries to raise them as their own, despite the fact that the children all have strikingly blond hair... 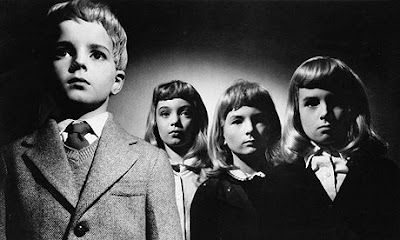 Despite the title, the story is light on religion, unlike John Carpenter's remake. The phenomenon is dealt with scientifically at first, and then politically as the phenomenon may have 'gone global'...
As the 'cuckoos' grow up, rather quickly, local scientist Gordon Zellaby's son David becomes the voice for the newcomers. It's a little distracting that his performance has been dubbed by what sounds like an actress doing a 'little boy voice'. Child actor Martin Stephens went on to another hugely impressive spooky kid role, as Miles in The Innocents (1961), as well as a teenage starring role in Hammer's The Witches (1966). His last role before giving up movies altogether.
As a brood, the children seem to have various uncanny powers that are growing all the time. At one point David chillingly mentions that they are trying to control aircraft! Anyone who tries to stand up to them are quickly punished, in an escalating series of 'accidents'. Like I said, the violence is inferred, but still shocking. Ron Goodwin's soundtrack uses subtle electronic elements, whenever they are using their 'hive mind'. 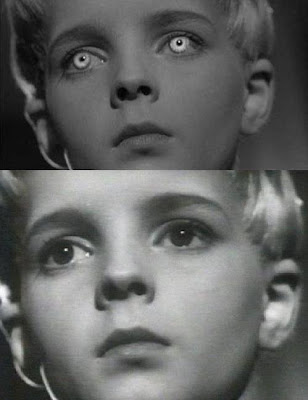 But the finished film seems to have been too subtle for the overseas market. While several characters mention that the children have weird eyes, the British version of the film left this to the imagination. However the American release added glowing eyes to all the children, heavily featured in the poster campaign and the trailer. 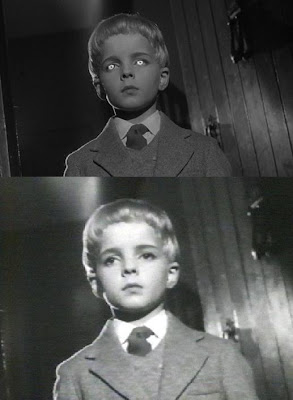 The effect is great for posters, but rather clumsy in the film - the action is frozen to make it easier to match the optical glowing effect to the eyes. This subtly changes the emphasis away from the children's minds. Only one shot employs the glowing effect with the original action, while David is talking. A considerably harder effect because the glow has to be 'tracked'. 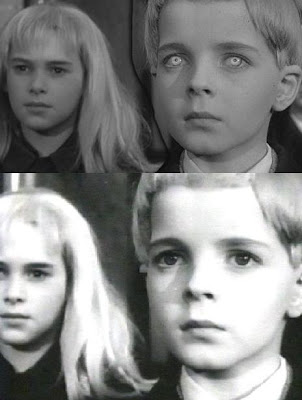 Unfortunately, it's this American version that's now widely available on DVD, even in the UK, leaving the 'non-glowing eye' version buried in the archives. The comparison grabs that you see are the DVD version compared to an old British TV transmission, the way I've always watched the film over the decades.

Apart from this lack of alternate footage, the DVD transfer is beautiful, providing a wider image than the 4:3 version, and a fully detailed range of monochrome.
This is classic British sci-fi, not nearly as famous as the Hammer Quatermass stories, for instance. But it still has a classic and recognisable cats - strange that the same faces appear in other horror and fantasy films. 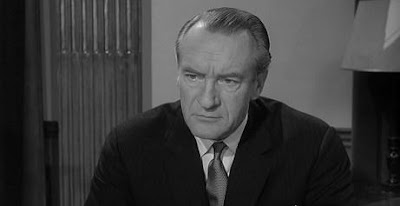 Top of the bill is George Sanders, who spent most of his acting career in the US, where he was once married to Zsa Zsa Gabor(!). Besides being an early screen incarnation of The Saint, one of his most famous roles was in The Picture of Dorian Gray (1945). Horror fans may know him as the butler in Psychomania (1973). Batman fans will know him as the screens first Mr Freeze (1966). I love him the most in A Shot In The Dark (1964) suffering quietly as Inspector Clouseau gradually destroys his billiards table. Village of the Damned is one of the best showcases for his dramatic side, again always understated but determined to learn more whatever the cost. 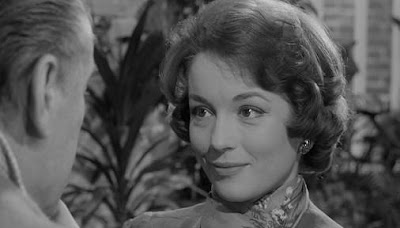 Barbara Shelley, as his wife Anthea, is more famous for her horror roles than any other, particularly Dracula - Prince of Darkness (1966) and Quatermass and the Pit (1967) - two standout performances in the horror genre. Her role is important in her attempts to humanise her new child and depict the effect the affair is having on the families.

Her brother is played by Michael Gwynn, a former experiment of 'the good doctor' in The Revenge of Frankenstein (1958), and a dramatic bit-part as Hermes in Jason and the Argonauts, which also starred Laurence Naismith, here appearing as the village doctor who's always smoking.

The DVD is made all the more appealing for being twinned with its sequel, Children of the Damned, together with the original American trailers for both films. 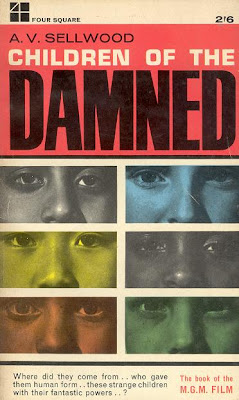 This takes off a few years after the original story, but with an original screenplay, and none of Wyndham's original characters. It's still very taut, with another wave of unusual children emerging around the world. The setting is more metropolitan, shot in and around Central London, where two teachers are baffled by a child prodigy who emerges from a very humble background.

As other child geniuses are assembled from around the world and linked to the earlier outbreak in the village of Midwich, the governments soon find their hands full with a force that could threaten global security... This is a slightly more explicit version of the themes of the first film, slightly more violent and dramatically tenser. The representation of children from around the world is unusual, though the young actor playing the leader is far less of a presence than Martin Stephens in the first film. I love the use of slanted 'dutch' angles to accent the action and the ending is very, very memorable. Again Ron Goodwin's music adds immeasurably to the atmosphere. 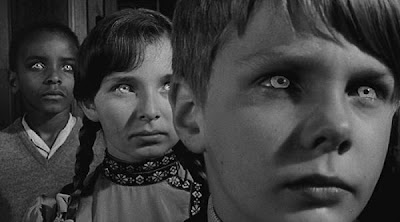 This time around, the producers have used the glowing eyes again, even in the UK version. I've never seen this film without the effect.

The cast are just as strong in the sequel, with Ian Hendry (Tales From the Crypt, Theatre of Blood) and Alan Badel (the suave villain of Arabesque) pitted against the police Alfred Burke (The Night Caller, Public Eye) and the military. Barbara Ferris is very strong as the children's carer who becomes their hostage, though strangely this is one of her few screen roles.

I must visit the actual church used as one of the locations: St Dunstan-In-The-East (at the corner of St Dunstan's Lane and Idol Lane), can be found near Tower Hill. Also, the huge, modern, white building seen in the background, as the children (in slightly slow motion) walk across a large square, is London's US Embassy. 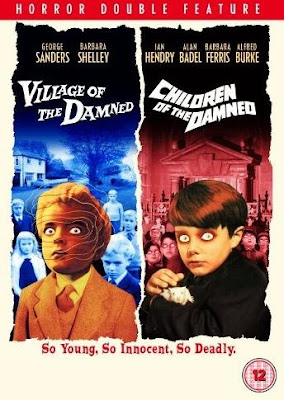 This is perfect as a double-bill. Old school, black-and-white sci-fi concentrating on ideas, consequences and a degree of realism, all over spectacle. Beautifully remastered in anamorphic widescreen with the original trailers. The icing on the cake would be the alternate version of Village of the Damned, without those eyes.