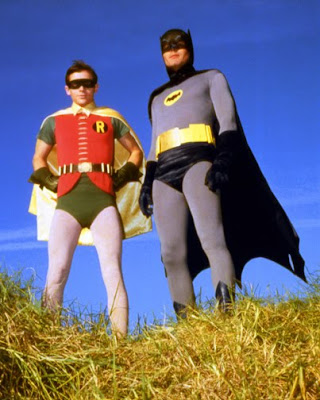 At a time when almost every TV show is now on DVD, it's amazing that Batman isn't. One of the funniest, most imaginative and influential shows of the 1960s. This is priceless, must-have TV, with outrageous plots, impossible detective work, Bat-villains, Bat-gadgets, Bat-bloody-everything and knockdown Bat-fights guaranteed in every episode.

I love all aspects of Batman - the newer darker, brooding visions of Batman, the animated adventures, the under-rated Batman Beyond of the future... but that doesn't diminish my love for this much less serious incarnation. The three Batman seasons are top of my DVD wishlist, TV or film. This classic series was more carefully made than many movies of the time, with wittier scripts, more way-out design and better cast lists! Many movies have unsuccessfully tried to copy it's tongue-in-cheek style, when spoofing comic characters, but I don't even think Flash Gordon (1980) is nearly as good, despite using the same scriptwriter, Lorenzo Semple Jr.

Like the best Pixar movies, the series appealed to all ages. The straight-faced heroics and fast pace was exciting for children, the tongue-in-cheek humour and pop culture style amused the adults and all important teens. Thankfully, Batman avoided being laden with a laugh-track. As a child, I thought I was getting a serious comic-book adaptation! Batman's hardware and Batcave certainly looked good enough. 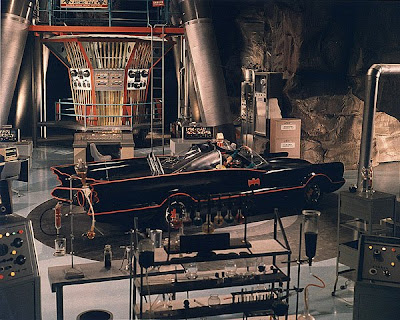 The Batmobile with flames firing out the back, together with the huge Batcave still look highly desirable. I've sat in both... well possibly it was a replica car. And all that's left of the Batcave is the outside entrance, filmed in Bronson Canyon, L.A. Inside the Batcave, every piece of equipment had a large sign, no matter how long-winded - a straight-faced gag that pre-empted the comedy likes of Airplane. 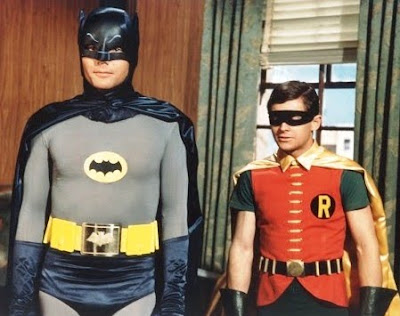 Adam West as Batman nailed the fine line between Bat-heroics and bellylaughs in the classic first story, when he battled The Riddler. Striding alone into a nightclub (Robin isn't allowed in, being underage), Batman discreetly orders a glass of milk at the bar, not wanting to "attract attention". The success of his character is the reason Adam West is now a regular character in Family Guy.

The accuracy of the expert casting extends to all the regular characters. Burt Ward as Robin is just a fantastic foil for West. With Madge Blake (Singing In The Rain) as Aunt Harriet installed in the Wayne Mansion to make the household look less suspiciously men-only, which paradoxically wasn't a problem in a boys comic. Neil Hamilton started off playing Commissioner Gordon completely straight, despite all the hijinks. Stafford Repp is gracelessly slow as Chief O'Hara - one of the many Irish policemen in this very sunny Gotham City. Alan Napier (Isle of the Dead) sets a high standard as an intelligent, resourceful and impeccably-mannered Alfred the butler. Season three introduced Yvonne Craig (In Like Flint) as the perky Bat-girl, riding around on a purple frilly Bat-Bike. All three Bat-stars have subsequently written biographies. 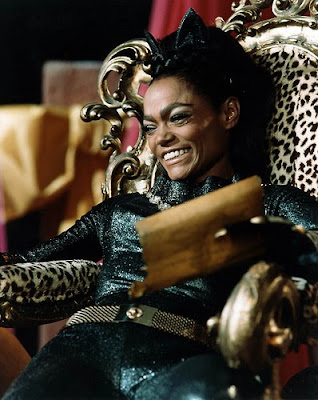 The casting of Batman's guest villains defined many of their characterisations for decades to come - for instance Jim Carrey owes much to Frank Gorshin's original Riddler. Besides the weekly guest Bat-villains were many celebrity cameos like Sammy Davis Jr as well as from other TV shows. Special mentions to Burgess Meredith (Rocky) as The Penguin, David Wayne (The Andromeda Strain) as The Mad Hatter, George Sanders as the first Mr Freeze, Eartha Kitt as Catwoman (above), Liberace (!) in a convincing dual role as Chandell (an example of villainy created just for the TV show), and especially Victor Buono (Whatever Happened to Baby Jane) as King Tut.

I read a story recently that the series was inspired by Hugh Hefner re-running an old Batman serial at the Playboy Mansion where a Fox executive was sufficiently inspired by how well it went down. The cliffhanger format from the serials was then used to close the first episode in every two-part story. Robin dangling helplessly over a pit of tigers or crocodiles, Batman being squeezed by two walls of spikes, Bruce Wayne helplessly strapped to a gurney as it speeds down a hill road towards a cliff edge... These became famously and inventively ridiculous, built up by William Dozier's unique voice-overs - "Tune in next week, Bat-fans. Same Bat-Time, Same Bat-Channel!"). For more about the 1940s Batman serials, look here. 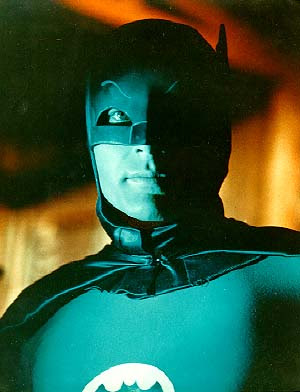 This is all a world away from the modern presentation of Batman. Tim Burton's 1989 reboot had to work hard to distance itself from the show's long-running comedy reputation. But it was a logical approach in the 1960s. Comics were just for kids and heavily policed for violence, forcing Batman into space with the harmlessly weird Batmite, friendly pet Bathound and surreal (rather than scary) villains like Mr Mxyzptlk. Superheroes were taken less seriously in sixties mainstream, always presented as comedies or self-aware spoofs, rarely as successfully as Batman. Modesty Blaise was treated like pulp, Barbarella spoofed itself... Later The Hulk and Spiderman TV shows aimed for something more serious, but without a movie budget. Batman's production team tried to spin-off with The Green Hornet, but the heroics didn't work without the humour. However it produced a famous crossover story, where Green Hornet and Kato meet Batman and Robin. Sounds greater when you know that Bruce Lee played Kato.

Presumably there's been a problem preventing this series from ever hitting home video - it was absent from VHS and now DVD. The primary-coloured sets and costumes, carefully shot on 35mm, make it a fantasy wish of mine as a Blu-Ray set, even with 120 half-hour episodes. But surely there's a stack of money to be made if the problems are sorted out. This DC Comic character's TV debut was produced by 20th Century Fox Television, the current movie franchise is Warner Bros. Batman must be caught in legal limbo somewhere in the middle. 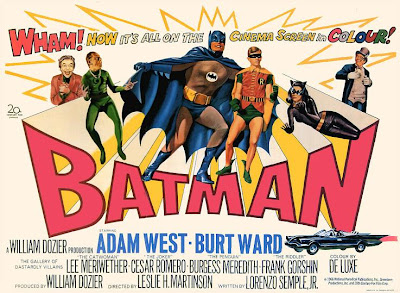 The show span off a movie, confusingly called Batman, made in 1966 during the show's first season. The film is proof of the popularity of Adam West's Batman and has always been available on every video format, up to and including Blu-Ray. No one's going to confuse West's tights with black kevlar, but the same name doesn't help it standout in listings or shelves. 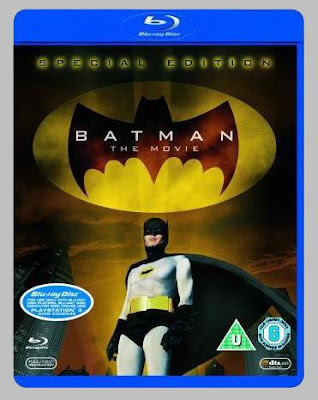 In the movie, Batman faced off against Joker, Riddler, Penguin and Catwoman. It introduced the Batcopter, Batbike and Batboat, as well as Batman's legendary encounters with a shark and a bomb. But there's now a generation under the impression that this is all that Adam West's Batman ever did. If you like the movie, there's a lot more where that came from. 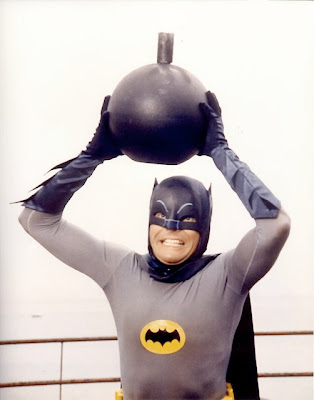 The series can now only be seen on TV, if you're lucky, at the mercy of modern scheduling, which now cuts down programmes of this vintage - ad breaks are much longer than they were in the 1960s. Besides running time cuts, there are sometimes jumpy film splices between scenes (TV stations used to broadcast off film, cutting the prints to suit their own ad breaks). Through the years some scenes can go missing because of seasonal references (like Santa Claus turning up) or censorship (Robin being eaten by a giant clam). Not to mention the end voiceover being butchered because the next episode is rarely coming up "next week" any more. 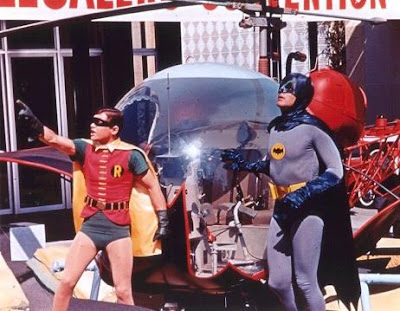 All in all, trying to enjoy a full-length, unblemished episode on TV has been difficult for decades. In the last three complete showings on British TV, each one has been cut around in different ways. I'd like to see it uncut again please. It should also look as good as Paramount's beautiful classic Star Trek Blu-Ray sets, made in the same era.

We want Bat-DVDs! 60 hours of the most fondly remembered, vividly colourful, tongue-in-cheekily written TV shows ever. In the meantime, it's the bootleggers that are making the money... 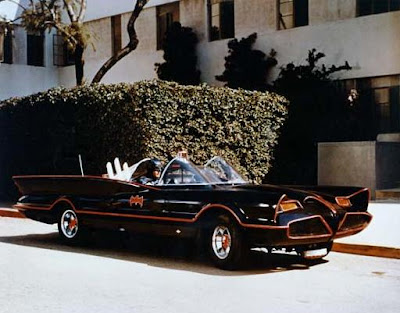 More about the awesome 1966 Batmobile...