From the makers of Horrors of the Black Museum, Konga, Trog, and Berserk! 
Before audiences thrilled to William Shatner’s unique acting style, British actor Michael Gough (most recently seen as Alfred the Butler in the Tim Burton Batman films, as well as Sleepy Hollow at the ripe age of 85) carved up a niche of his own for reaching the very top of the over-acting scales in a series of memorably low-budget horror films. Years before Shatner bellowed "KHAAAAAAN!", Gough had already done a "KONGAAAAAAA!".

His starring roles were in fright films that were a tier below the Hammer Horrors and Tigon terrors in which he only gained supporting roles. He was in Hammer’s first Dracula (1958), a fantastic rendition of the oft-told tale. As Arthur Holmwood he began his bankability as a horror star, but worked steadily for producer Herman Cohen, whose scripts lacked the subtlety of Hammer screenplays, which is saying something!

In 1959, Gough starred in Horrors of the Black Museum, where a Jekyll/Hyde killer reuses famous murder weapons from Scotland Yard’s infamous crime museum. The opening scene with the ‘spiked’ binoculars set a new high in cinema sadism, which Cohen’s films specialised in – prefiguring the inventiveness of death scenes in seventies slasher films. The film was compared to Michael Powell's Peeping Tom and Sidney Hayers' Circus of Horrors in David Pirie's seminal critique of British Horror films, 'A Heritage of Horror', which is finally getting a revised reprint very soon. High praise indeed.

In Herman Cohen films, careful attention was lavished on the murders, but the characters were cardboard thin, leaving Gough without much depth to work with. He opted instead to heighten the emotional range… when his character gets angry, he’s very VERY angry. The same goes for sarcasm, sadism, glee – all pitched as high as the ceiling!

This frenzied brand of acting isn’t achieved with arm-waving or playing with props. Gough has to achieve this intensity in close ups – by using every muscle in his face and neck, and the full capacity of his lungs, he emotes until the viewer is pressed back in their seats!

Thus making the subsequent 'Cohens', like Konga, essential viewing for fans of his style, as is Berserk! and Trog (both as second fiddle to Joan Crawford).

To label Gough's acting in this period as ‘bad’ (which he himself does) is to do him a disservice. Witness him in other horror films of the decade, under different directors. He is more subdued but still just as memorable – my favourite being the sneaky artist duelling with snooty art critic Christopher Lee (not much of a stretch there) in Dr Terror’s House of Horrors, where Gough again appears with a chimp. Which brings us back to the least seen of the Gough/Cohen horror films Black Zoo, later re-titled as the better and obvious choice Horrors of the Black Zoo. Here Gough is a fanatical animal lover, with a menagerie of big cats and a gorilla in a small zoo somewhere in L.A. He has an empathic, almost hypnotic control over his lions and tigers So when trouble threatens, he can kill his enemies without laying a hand on them… shades of Willard.

The animal attacks are quite spectacular, and even the man in a gorilla suit despatches a victim with a particularly nasty realism, that looked censored in the print I managed to see, but still packs quite a punch. But scenes of lions leaping on their trainers looks too much like a Tarzan film, and this story lacks the horror ‘hook’ that other Cohen films had (like the circus-themed deaths in Berserk!). It was obviously far more dangerous to film, with the cast often sharing the set with a lion in many scenes. 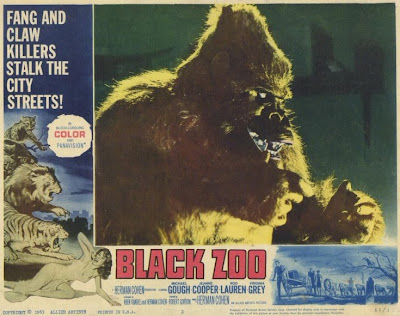 It’s also interesting because the police investigation subplot, that often slows these films down to a crawl, is barely featured. Instead the focus is on Gough, his wife and their mute assistant (Rod Lauren) – his character is a James Dean clone, a sultry good-looking ‘teenager’ who spends a lot of time flexing inside his tight tee-shirt and jeans. The camera spends an inordinate amount of time on him and barely any time on the pretty girls who visit the zoo. The relationship between him and the teen is far more complex than the sparks between Gough's character and his wife. (Sad to say that Rod Lauren passed away only three weeks ago.) 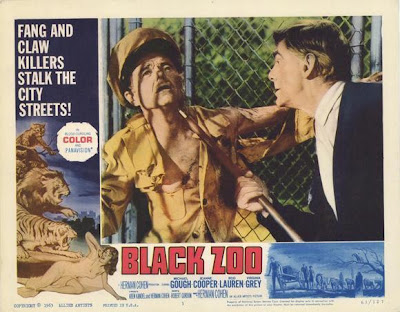 Then again, a dramatic highlight of Black Zoo starts innocently enough with Gough’s character talking to his wife (Jeanne Cooper) over dinner in their kitchen. An argument develops, escalates, and keeps on escalating, to the breath-taking heights OF OVER-ACTING! At it’s peak, Gough’s voice transforms from a shout TO A FEARFUL BELLOW, with Cooper keeping up with him ALL THE WAY TO THE TOP! A fantastically simple scene turns into a veritable Battle Royale of acting, where subtlety is the first victim... REPEATEDLY.

As a horror film, besides the sadistic mayhem, Black Zoo also offers a unique scene where Gough and his family of both people and big cats walk in a funeral procession to a misty graveyard. Seeing lions and tigers among the gravestones, in a scene dominated by grandiose music, struck me as unique and inventive, largely due to the camerawork and lighting. I was instantly reminded of the Roger Corman Poe films of the time, and indeed cinematographer Floyd Crosby had been responsible for shooting most of them.

In fact, seeing a Herman Cohen film shot in Hollywood, makes it look ten times better than his English films. His low budget seems to go much further. He can also get famous faces more easily in the US. Way down the cast are Elisha Cook Jr (The Maltese Falcon, Electra Glide in Blue) and Edward Platt as a police chief, already being called ‘Chief’ years before his famous regular character in the TV series, Get Smart, as the Chief!

I would even go as far as to say that it's Herman Cohen’s best film – perhaps I haven’t over-watched it like his others, but with some inventive surprises, brutal murders, a less threadbare look than usual, and even some quality drama leaking into the three-way split between the central characters… Do you want to know MORE?

An excellent site on the films of Herman Cohen is here, with stills and posters from Black Zoo and all his others. The fantastic portrait of Michael Gough comes from their site, and I hope they'll forgive me for nabbing it - it's the only decent photo of the actor on the net. Please visit their site for more details about producer Herman Cohen's many other crazy, enjoyable productions.

Email ThisBlogThis!Share to TwitterShare to FacebookShare to Pinterest
Labels: animal attack, NOT ON DVD, UK