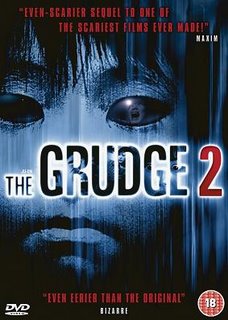 Due out on DVD in the UK on October 9th, this is the impressive movie sequel to Ju-on: The Grudge. Director Takashi Shimizu made this fourth Japanese Grudge movie (two made on film, two made on video) before making the two American remakes in 2004 and 2006.

Juon: The Grudge 2 begins with a cast of new characters that slowly link together after a confusing start, where the Grudge is targeting a car. A horror actress played by Noriko Sakai and her husband are inside – the crux of the story is that she’s pregnant…

There are new thrills and chills, with one silly scene featuring a wig (The Wig did it better) and yet more nods to Ring. It’s to writer/director Shimizu’s credit that he wrings fresh situations out of this, made in the same year as the previous film. As the narrative plays around with flashbacks and flash-forwards, there’s a fantastic, disorienting chapter when the Grudge attacks one victim in her dreams. 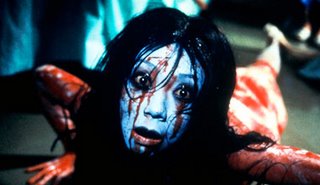 While Ju-on: The Grudge was inextricably linked with the earlier video versions, like it was part of the same jigsaw, Ju-on: The Grudge 2 seems more disassociated from the previous events in the house, almost starting over afresh with a new take on its potentials. It still feels like Shimizu can easily pull a successful third (fifth?, eighth?) film in this series out of his hat.
The Snowblood Apple website has an impressive review of Ju-On: The Grudge 2 that I was loathe to compete with - it's full of screengrabs and spoilers if you want to know more...
JU-ON: THE GRUDGE 2 – THE DVD
On October 9, the Premier Asia two-DVD set is released (pictured at top), full of extras including interviews, deleted scenes. Although it gained the title Ju-on: The Grudge 2 while on release in Asia, the UK release is confusingly titled The Grudge 2, the same name as the American sequel. 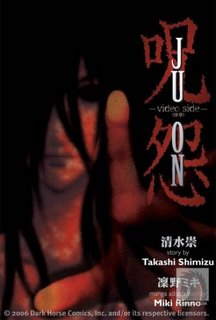 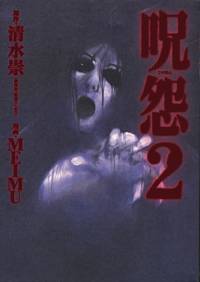 JU-ON: THE GRUDGE - THE MANGA
When Ju-on: The Grudge 2 was released in Japan, a second manga book based on Shimizu’s stories was published – these (pictured) are now available in English translations from Dark Horse Comics, though I find the films creepier…