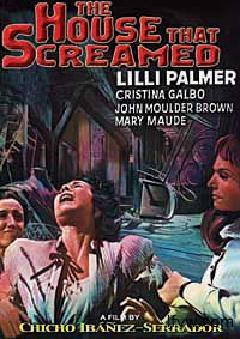 Schoolgirls on the verge of a nervous breakdown

(This is a stylish and overlooked Spanish horror film, not to be confused with The House That Screamed (2000) from the US, starring Bob Dennis.)

The DVD (pictured above) is a welcome release for this rare film in 2.35 widescreen, though the quality of the packaging makes it look less than legitimate.

Directed by Narciso Ibanez Serrador, this almost looks like a dry run for Dario Argento's Suspiria (and predates it by 7 years) which also had a mystery serial killer at large in a girls' boarding school. 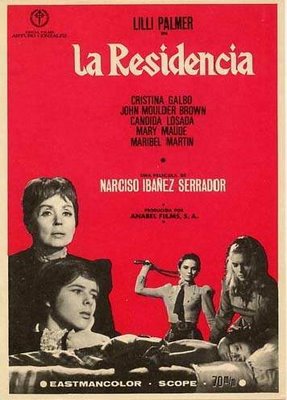 As new recruit Theresa arrives (Christine Galbo, star of awesome Italian zombie shocker Livng Dead at the Manchester Morgue), she soon learns that despite an all female staff, the girls still manage to cultivate their sex lives (the delivery man is very popular).

Also, when disobedient student Irene (Mary Maude of Crucible of Terror) is severely punished in a locked room with a cat o' nine tails, we know it's no ordinary school.

With punishments way beyond strict and trapped in a building that's almost impossible to escape from, they're "girls on the verge of a nervous breakdown" (an actual quote from the film).

Things get nastier when a bloody murder also worthy of Dario Argento, surprises us with disorientingly edited multiple crossfades, all in slow motion.

Unlike the more surreal Suspiria, this story has a more sexual angle than a supernatural one. For instance, the Governess is keen to supervise the girls' communal shower. This scene has a camera move very similar to the one in De Palma's Carrie (1976).

The film works well as a gothic murder mystery, but also as a dramatic hotbed of tension, though not as exploitatitvely as Euro-horror soon became. It's also in complete contrast to the director's other horror film, the shocking Who Can Kill A Child? (1976), which is shot present-day and all on location. I previously had no idea that the two films were directed by the same man.

Lilli Palmer plays the Governess, (a similar role to her lesbian teacher in the 1958 German remake of Madchen in Uniform). UK TV fans may recognise her as one of The Zoo Gang (which boasted a theme tune by Wings), or from one of her last roles in The Boys from Brazil. With a film career that lasted fifty years, Palmer proves that she can easily hold a film together single-handedly, and inject menace or compassion into a scene with a subtlety missing from many horror films of the period.

Another recognisable face is a very young John Moulder-Brown (Deep End, Vampire Circus) playing the young son of the Governess. 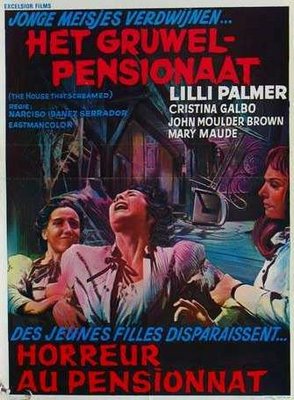 This release is the best available at the moment, and looks good, despite being non-anamorphic. The audio is in English language, but suffers from slightly loose lip-synch throughout the film, and the music suffers from noticable distortion in places.

But until something better comes along, we're lucky to have this at all. Which is a pity, because it's better than many of the Italian horror films that are much better known.