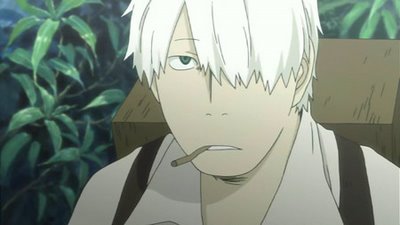 Ginko - the quietly spoken lead
in the Mushishi anime
This is my favourite anime at the moment... now concentrate...

Mushi are a strange, largely unknown part of nature - primeval entities in terms of biology, creatures exisiting somewhere between this world and the next.

An expert roams the countryside trying to help people who have problems with local mushi. He is Ginko, a Mushishi (or mushi-master), travelling around with a box of herbs on his back. He has a mop of white hair, though he isn't old, and he wears a brown trenchcoat. If it wasn't for Ginko's modern attire, you could easily think the series was set in the 19th century, or even further back. Everyone he meets lives traditionally, wearing kimonos and living in wooden houses.

This premise means that there are no modern distractions, or technological solutions on offer. Ginko solves problems with knowledge, deduction, simple science and occasionally herbs. I'm guessing here, but is it more than a coincidence that he's missing his left eye (hiding it with his hair) just like Mizuki Shigeru's popular character Kitaro the ghost boy? Could be just an homage, but I think Mushishi is very much a Gegege No Kitaro for an older audience. It's beautiful, paced, spiritual and keeps its humour understated.

This isn't to say that the episodes are slow - there's always something going on -usually a mystery or drama is unfolding - and the action frequently becomes spectacular. The artwork is beautiful, with bursts of intricate animation creating a sense of wonder, sometimes horror, of the other dimensions we're sharing space with...

Each episode stands alone as a story, with little need to watch them in order. There are a few links, especially the recurring character of the collector. My favourite episode so far tells of Ginko's childhood and how he became a Mushishi - it's a fascinating episode with many new mushi.

Mushishi is based on the manga of Yuki Urushibara, whose stories the episodes closely follow - there's a sample of her artwork on this page. But stories are running out, and the series looks set to end at 26 episodes. I can't get enough! To me it's unique and very different, very calming, very Japanese. 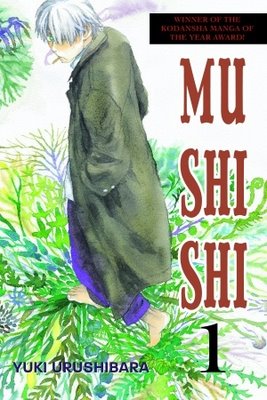 [UPDATE 10th Jan 2007: Translated volumes of the manga have now been published in the US. 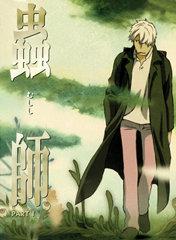 The region 2 DVDs in Japan are slowly being released but without english subtitles. There's a new 'grey' release from Hong Kong (pictured left) of the first 13 episodes, but these are not anamorphic, and the subtitles cross the lower edge of the picture. As usual with this type of release, there are plenty of spelling mistakes and the timing is very poor on the first episode, way too fast. Not the perfect way to see a near-perfect series.

November 2007 update: the series was eventually released in 2007 in the UK and US, 16:9 anamorphic with English and Japanese stereo and subtitles.

There are two CD soundtracks available in Japan. The incidental music is made up of quietly beautiful instumentals, but the opening theme song is too drippy for my taste, a love song with wet lyrics is out of keeping with this story, spoiling an otherwise perfect anime. Both CDs are still available from Amazon or CD Japan.

If you're in the mood for spoilers, there's plenty of screengrabs here on the Memento anime blog, with plot recaps and extensive analysis. 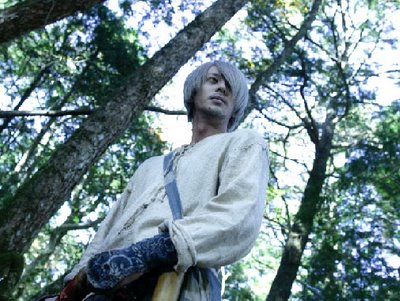 Joe Odagiri as Ginko in BUGMASTER, the movie version of MUSHISHI

[UPDATE 10th Jan 2007: this news from Twitch - Mushishi is now also a live-action feature film, known internationally as Bugmaster (not a great title) to be released in Japan in March, 2007. Directed by no less than Katsuhiro Otomo (director of Akira and Steam Boy). It seems to be a fairly low-budget film, simply presenting several episodic stories together. Ginko appears as a young man (like the anime), rather than a teenager (in the manga). I'm not reading the reviews until I've seen it for myself, but I hear they're not as good as those for the series. Midnight Eye online magazine has a rare interview with Otomo about the film.]