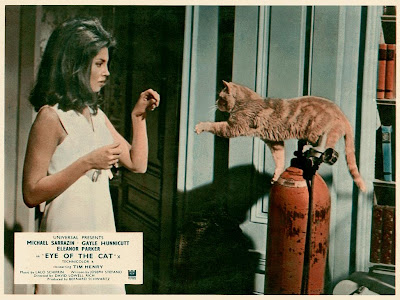 A twisty, atmospheric thriller written by Joseph Stefano, the scriptwriter of Psycho no less. After the success of Psycho, Stefano famously turned down Hitchcock's offer of scripting The Birds in order to help write and produce classic sci-fi series The Outer Limits with Leslie Stevens. His career in film, after that decision, was far less busy than his work for TV. But in Eye of the Cat, Stefano mixed eerie elements from both Psycho and The Birds into one carefully tangled scenario. 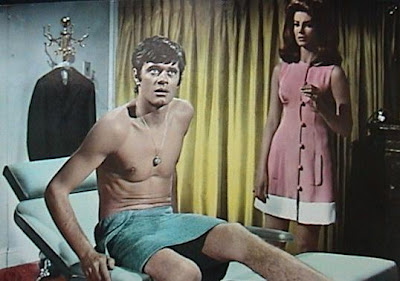 Wylie (Michael Sarrazin) and Cassia (Gayle Hunnicutt) are a scheming young couple trying to worm their way into a hefty inheritance. Wylie's step-mother (Eleanor Parker) is severely ill with a lung condition, but has written him out of the will after he left the family home years ago. As he returns to regain her good intentions, he discovers that 'Aunt Danny' now has a hundred cats in the house, and he's intensely ailurophobic, that is intensely frightened of having any cat around. The cats also seem to be protecting their ailing owner... 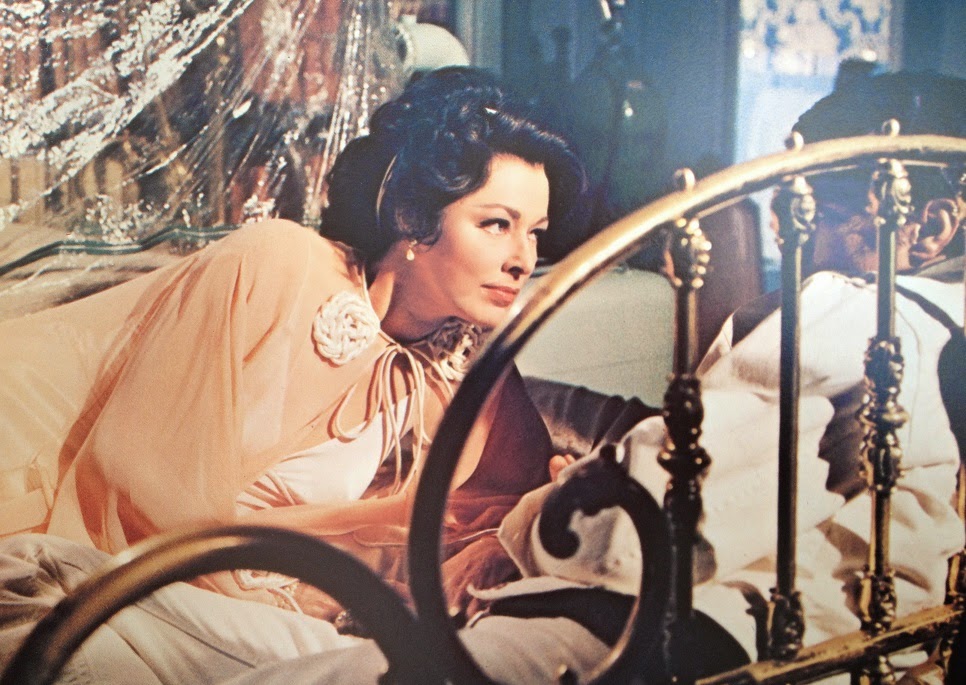 I was first aware of the film from Ivan Butler's Horror in the Cinema, which presented it in the sub-genre of cat-horror! A supernaturally-intelligent ginger moggy appears to know all about the murder plot and all its friends will fiercely try and prevent it. Slow-motion photography, harsh lighting and extra-loud growling and hissing (overlaid with a similar ferocity to The Birds soundtrack), together with the terrified reactions of cat-phobic Wiley, sells the idea of the dozens of cats as malevolent and violent. A queasy score by Lalo Schifrin (Bullitt, Dirty Harry - also very SF movies) describes Wiley's paranoia whenever there's a cat nearby. Their appetites are made more threatening by having their catfood awash in bright red blood. 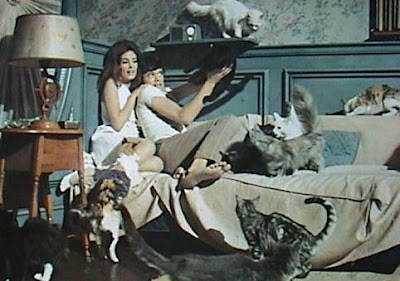 It's also a smartly written thriller, set in San Francisco at its most 'happening', with sixties sexual attitudes and hip-words. One scene, in a smoky pot-den, presented one of the first non-judgemental gay jokes that I'd ever seen. Stefano exaggerates the amount of black humour that he'd subtly laced throughout his script for Psycho. 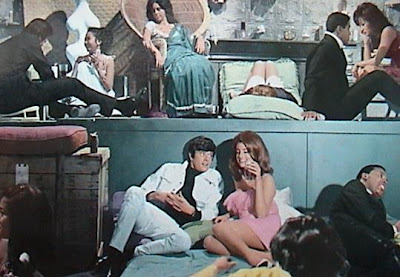 My favourite scene is when Aunt Danny's electric wheelchair malfunctions on a steep San Francisco hill... It's cleverly laid out, in a suspense sequence obviously inspired by Hitchcock, Eleanor Parker reaching out to the camera just like Martin Balsam did on that staircase. 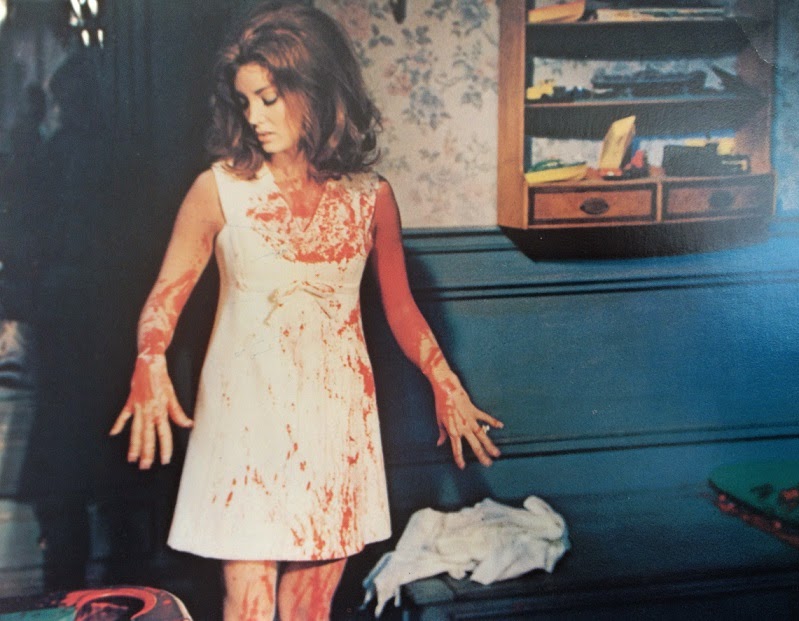 Eye of the Cat stars Michael Sarrazin (who next starred opposite Jane Fonda in her Oscar-nominated performance in They Shoot Horses, Don't They? as well as The Reincarnation of Peter Proud) and Gayle Hunnicutt (The Legend of Hell House) both at their sexy heights, along with Tim Henry adding extra beefcake as Wiley's subservient younger brother. Eleanor Parker (The Naked Jungle), despite playing an ailing society dame, is still alluring enough to add a sexual element to the relationship with her stepsons.

You may recognise the doctor, actor Laurence Naismith, from Jason and the Argonauts (1963), The Persuaders (1971), The Valley of Gwangi (made the same year) and the original Village of the Damned (1960). 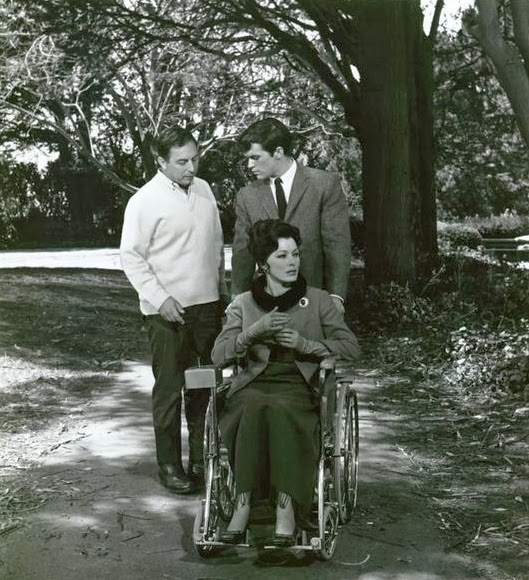 Director David Lowell Rich and the cinematographers do a fine job, especially with the agile and precise camerawork. Rich's biggest film was Airport 79: Concorde (ahem), and dozens of TV movies, including cult favourites Satan's School For Girls and Horror at 37,000 Feet.

Eye of the Cat was last available on home video on VHS in the US, but also used to play regularly on late night British TV. The action is framed very low in the 1.33 frame, presumably to protect fully exposing many of the actors' during nude scenes. I'd love to see it available on DVD and the soundtrack on CD.

The last time I saw it on ITV, there were a few scenes missing - so there's possibly a couple of versions out there (US and UK?). These include a wonderful 'catfight' in a women's toilet!


And here's an Eye of the Cat location visit, which we tracked down on a visit to San Francisco... 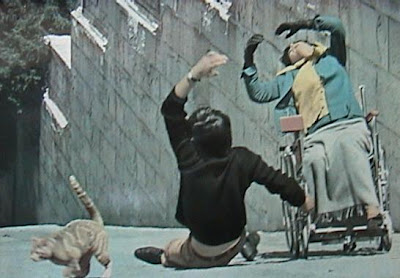 The filming location for the exteriors of the great house on the hill, and the park opposite - can be found at the junction of Octavia Street (the name can be seen inscribed on a kerbstone in one scene) and Washington Street. We took these photographs (below) in 1998. The wheelchair hill runs downhill northwards from the big house, which sits on a T-junction backing onto Lafayette Square park, also used in the film. 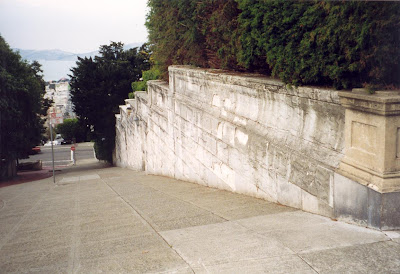 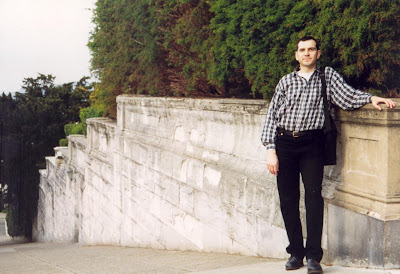 The 'wheelchair incident' happened in front of this wall. 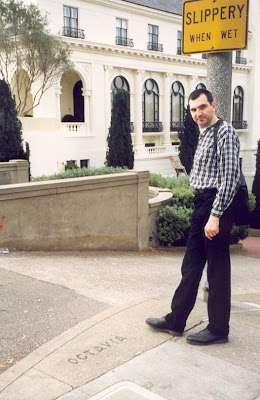 Across the street from that wall, you can see into the big house.
Note also 'Octavia' carved into the kerb. 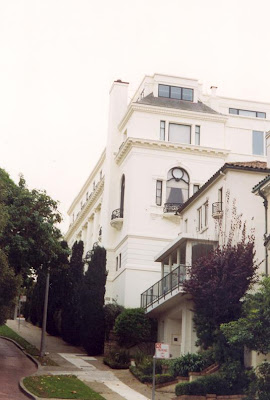 Down the hill, looking up at the big house.