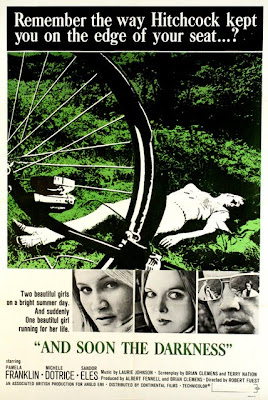 Tense thriller from the production crew of The Avengers

(This is an updated review, first posted in 2007.)
This is a good companion piece to Blind Terror (US title See No Evil) also written by Brian Clemens. There's a slow-burning set-up that carefully builds up atmosphere, and never telegraphs to the audience where the story will go next.

Again, I was first frightened by this film as a teenager. It's still intriguing and suspenseful, capturing the atmosphere of a hot continental summer. There's a hundred films where people are stranded in the unwelcoming wilderness of middle America, but how many are set in rural France?

Although this is one of my favourite psycho-thrillers, I still want to see the new remake that stars Karl Urban. It won't need much tweaking to work really well today. 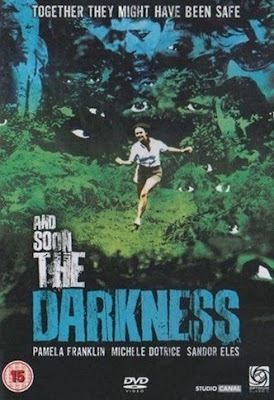 Pamela Franklin and Michele Dotrice play two friends on a cycling holiday in the French countryside. The girls cross paths with a mysterious stranger, and soon afterwards get separated. Michele thinks she's being watched. But when Pamela tries to find her again, she can't... either they keep missing each other, or there is a mystery here, and the local people (those who talk English) talk about other local disappearances... 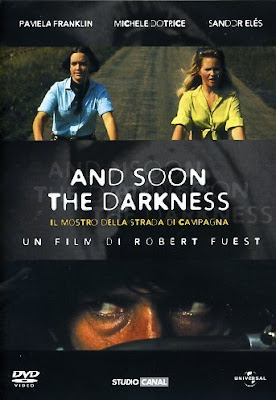 With Brian Clemens writing and producing, Robert Fuest directing, and Laurie Johnson composing, you'd be forgiven for thinking this was an episode of The Avengers (the series had just been cancelled). Together, they successfully make a Hitchockian thriller, inverting the setting of a psycho-thriller from a cliched storm-drenched, haunted house into sunlit open fields, a little like the famous cropduster scene in North by Northwest.

Talking on the US DVD commentary track, Clemens must have had a lousy holiday in France to inspire the menace of the deserted roads and the unfriendly locals. All the French spoken in the film remains untranslated (by subtitles), siding us with the confused English holidaymaker. We are as much in the dark as she is. Perfectly cast, Michele Dotrice and Pamela Franklin both look great in hotpants (tight, short shorts). Franklin was already a horror veteran, as a child star in The Innocents (1960), The Third Secret (1964) and The Nanny (1965), and soon appeared in the The Legend of Hell House (1973) as a psychic. Oh and let's not forget she was then in the fairly awful The Food of the Gods (1976), a sign that her film career was slowing down - what a terrible waste. I'll watch her non-horror roles - she's such an interesting actress.

Michele Dotrice (daughter of actor Roy), is better known in the UK as a sitcom star, but had also done horror in Hammer's The Witches (1966) and soon appeared in Tigon's extraordinary Blood on Satan's Claw (1971). Sandor Eles' character roams the countryside, appearing here between his two famous Hammer horror roles, The Evil of Frankenstein (1964) and Countess Dracula (1971). Like most of the main cast, British actors at this time couldn't afford to turn their noses up at TV work or horror films. Though Sandor's Hungarian accent often restricted him to playing villains.
Director Robert Fuest is always interesting, pushing for unusual but effective cinematography, set design and story ideas. Here there aren't any of his usual stylish sets, instead he uses the sparse locations, constantly achieving dramatic effects with subtle lighting and framing. He was the perfect choice as a director for many episodes of The Avengers, and his next few films are among my favourite ever - The Abominable Dr Phibes, Dr Phibes Rises Again, The Final Programme and The Devil's Rain.
I'm sure that the music is supposed to remind us of Hitchcock's films, but mostly it reminded me of The Avengers, until the intense climax where composer Laurie Johnson complemented the action with unique and eerie sounds. The region 1 DVD is 16:9, but the 1.33 aspect I'm used to seeing on British TV looks better off unmatted. For example, some scenes of the girls cycling are so tight that you sometimes can't even see they're sitting on a bike - surely not the intention. But the DVD has a great commentary track with both Brian Clemens and Robert Fuest. Clemens' "necrophiliac" comment is a classic! There was a UK DVD release from Optimum soon afterwards.
More on the genre films of Robert Fuest here.
Posted by Mark Hodgson at 11:28 am