The George Lucas EWOK Trilogy – why? 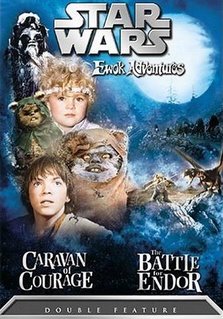 Ewok double bill out on DVD. Why?

Sometimes filmmakers I respect, filmmakers who produced films I will always cherish, make something so jaw-droppingly awful, that the very mention of it’s existence only gets looks of disbelief.

To quote a Star Wars fan commenting on IMDB, “anything Star Wars is the best”. I must disagree.

This is to throw some light on corners of the Star Wars Universe that are almost so bad they're good. But not quite. They're bad.

Keeping a nominal score, let’s watch as the scales tip over into more bad Star Wars movies than good. 2-6. If you liked Revenge of the Sith, that’s still 3-5.

For me the Star Wars saga was great until the Ewoks turned up. Loved Star Wars (as it used to be called), loved The Empire Strikes Back. Then Return of the Jedi introduced the Ewoks, who saved the day and ruined mine. I even hoped that the Special Edition of Jedi would rectify the matter and realistically portray Ewoks as cannon fodder for Stormtrooper weaponry. But no.

After Return of the Jedi, George Lucas planned the next episodes in the Star Wars universe – did he write the third trilogy? – the first trilogy?

(Wait a minute! What a great idea. Let’s make an Ewok adventure. No. Let’s make two Ewok adventures! I’ve still got the suits. And a warehouse full of unsold Ewok merchandise left over from Jedi. Call up ILM!)

When Star Wars is already child-friendly, why spend so much effort aiming additional films at five year olds? Get them while they’re young?

Now I know these were made for TV in the US, but in Europe and the rest of the world, we were sold these as movies, with lavish looking movie posters, and movie ticket prices. That makes these Star Wars movies. 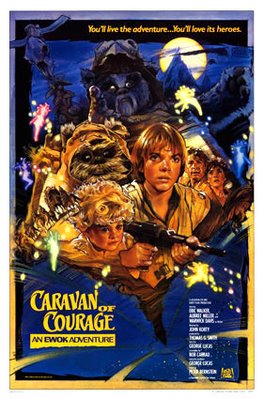 Made back when hang gliders were cool! (Gotta have a hang glider in the movie. They’re cool right?) In the seventies they were cool. If it wasn’t for all the twigs on the forest floor, we might have had little wooden Ewok skateboards too.

A family crashland on Endor (we don’t see the crash), and two children are discovered and cared for by the local Ewoks – a sort of Tarzan and the Teddy Bears. The parents have been kidnapped.

The grunting Ewok language doesn’t communicate to the audience what the hell is going on in the early scenes (much like the endless wookie ‘dialogue’ in the infamous TV Star Wars Christmas Special, which is slightly more watchable). A tired voiceover is provided by Burl Ives to tell us what the Ewok actors are emoting, trapped behind masks that only have jaw movement. 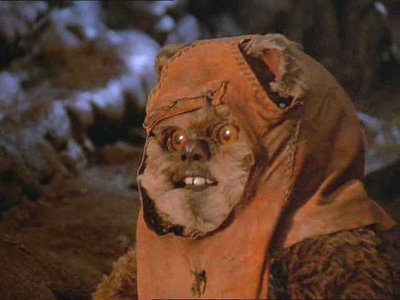 There’s a little blonde girl, with a mop-top of ringlets and an Olivia Newton John sweatband, to remind us of Earth in the eighties. Her brother is an angry young Skywalker substitute in a familiar orange flightsuit. They are looking for their parents. That’s the plot.

Like other Star Wars films, there are the familiar spot wipes and cross wipes from scene to scene. There are the treehouses of the Ewok village. There’s lead Ewok, Wicket, again played by Warwick Davies. The family starcruiser looks like a spaceworthy version of a snowspeeder, but not much bigger. There’s laser rifles, though again they’re not as deadly as throwing rocks or spears.

Don’t get me wrong. I like teddy bears. I just don’t like them running around doing cute things in forests. I also like to suspend my disbelief. But I have limits.

My definition of a caravan constitutes a long line of camels, not 3 ponies and a horse. Taking on a giant, (well, tall) monster with 3 ponies and a magic stick, does not constitute a Star Wars adventure. 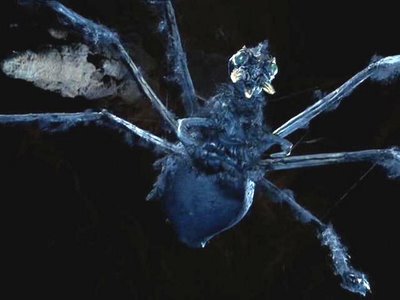 A ridiculous model spider gets a lot of screen time and big close-ups, but shouldn’t have had either. Anyone who ever complained about fake-looking spiders in anything else should really watch this and vote it the worst. I’ve seen fifties B-movies with better looking fake giant spiders (check out Missile to the Moon).

The only standout special effect is the dancing lights provided by a cloud of tinkerbell-type fairies. Of course, they push this too far and for too long, ending up with a huge close up of what looks like an animation from a 19th century zoetrope, endlessly cycled through three poses.

The acting shouldn’t go without a quick mention. (Don’t act the lines, just repeat them, “We need more medicine,” for emphasis. Repeat “I miss Mommy and Daddy”...) 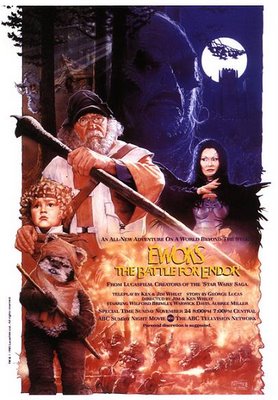 Similar to the especially cruel opening of Alien 3, writer George Lucas then kills off the moppet’s entire family before they get a chance to escape Endor. You spend the whole of the first film reuniting the family, then you kill them off - nice. Now you’ve made the little girl cry. Happy now, George?

The lower budget whittles down most Ewok activity down to one Ewok, Wicket again, now talking cute English so that a narrator is no longer needed.

There’s an evil witch, who can turn into a crow. Well it’s Sian Phillips in an Elvira wig. There are evil child-catchers, in an evil castle. The story could easily be a limp rehearsal for Willow, but with pantomime acting.

A brave band of heroes needs to break into the castle and free the captured Ewoks. But instead of Val Kilmer and some pixies, we get an old man, a moppet, an ugly muppet and Wicket.

Wicket has oversized gappy buck teeth that don’t warrant the many close-ups he gets. He looks uncannily like my old boss who used to wear food in his beard after lunch. The memories still make me nauseous. Perhaps I’m not Ewok-phobic after all, it’s just flashbacks of the boss.

The blonde moppet from the first film gets most of the screen time, but can't act for toffee – she’s gained even more cuter blond ringlets since the first film, and seems to be inspired by the same genius who thought toddler beauty pageants and Shirley Temple films are a good thing. Great for parents watching home movies of their own children, great for inspiring involuntary stomach-clenching in the rest of us. 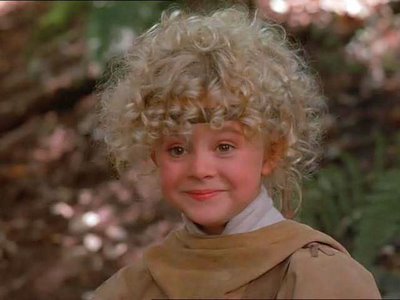 Across the board, the acting is like a school play – George presumably liked the idea of using a non-acting blond kid and saved it for The Phantom Menace.

Excitement drips off the screen with child-friendly stunt scenes. (Can you fall off this log into this pile of leaves?) 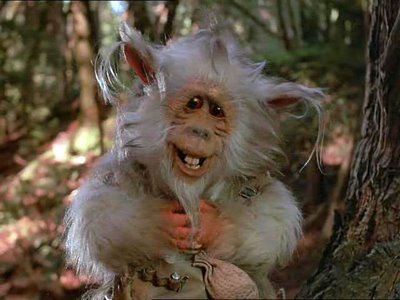 There’s a very, very ugly muppet with buck teeth, who gets lots of close ups. He also looks like my old boss.

(A little girl surrounded by ugly muppets? I’ll save that idea and use it for Labyrinth.)

All the action is underscored by endless jolly music. Jolly flute music, see moppet dance. Hear moppet sing a nursery rhyme. If you hadn’t killed off the little girl’s entire family, you wouldn’t need to try and cheer us up again, George.

There’s lots of cuddling scenes, Ewoks and the old man she finds in the forest. Buckets of sloppy sentiment, cuteness, cuddling and lots of scenes of being tucked up in bed.

Why not write a movie like Bounty Hunters of the Empire?
Han Solo – The Early Years?
Princess Leia’s Secret Diaries?

Including Return of the Jedi, these make up Lucas' epic Ewok trilogy. But please, no more… What? Ewok cartoons? Also on DVD? Nooooooooo… 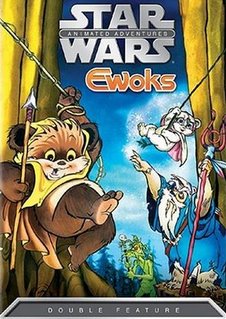 Now I’ve raked it all up, don’t get me started on Captain Eo, another space fantasy based on a George Lucas story. (No, Angelica, evil acting is like this… twiddle your fingers like claws… closer to the face… that’s it!) and it was directed by Francis Ford Coppola…