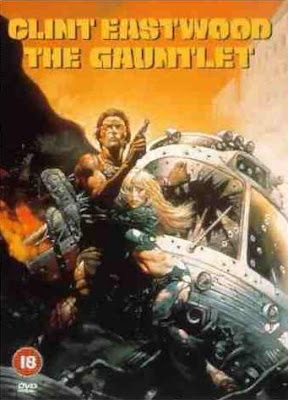 
Clint takes on the awesome firepower of... the Arizona police force!

Clint Eastwood has worked long and hard both in front of and behind the camera. While he first proved his directing skills with Play Misty For Me way back in 1971, his seventies thrillers gave way to more personal, less successful films in the eighties.

To keep going, he often fell back on his Dirty Harry image, which he does with The Gauntlet, but cleverly so. From the publicity, his character looks like another tough cop. But he plays an under-achiever, an alcoholic has-been who's coasting towards retirement, still a long way off.

When the loser of the force, Ben Shockley (Eastwood), gets an assignment so simple even he can't screw it up, he's slow to realise his situation. The prostitute (Sondra Locke) he's sent to escort from Vegas to Phoenix is scared and paranoid, but what could she know? As soon as they start the trip home, he's surprised when it seems everyone is out to kill them, by every means necessary! 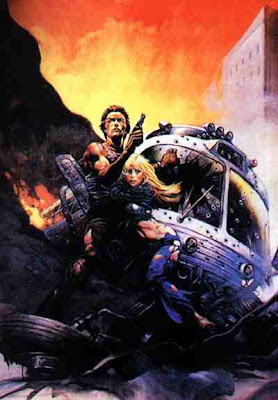 While this is often a logic-stretching action film, it's also tongue-in-cheek, hinted at by the Frank Frazetta poster art, showing a superman cop, his clothes in tatters, looking like Conan The Barbarian, (Frazetta also painted the famous series of Conan paperback covers). In terms of tone, this could be Die Hard in the desert, but ten years before John McClane's first movie.

While it's Clint doing mainstream comedy action, it doesn't pull its punches - there's death, despair, rape! What Clint often doesn't get credit for is his continually careful scripting of women characters - as realistic, strong and equal. They show up the men and play on their weaknesses. His character also has a different moral core to John McClane. However dire the situation, he doesn't seem to kill anyone! 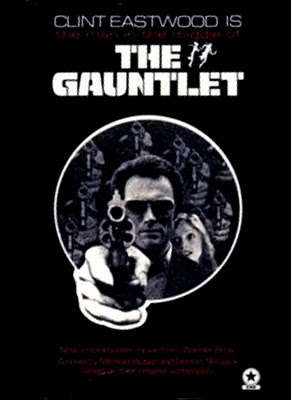 The paradox of Dirty Harry is that Harry Callaghan is a cop in a judicial system that's so restrictive, he can only get the job done by breaking the law. In The Gauntlet, the police force are again under fire. Besides Shockley and his buddy in the force (Pat Hingle), the law are shown as either corrupt, depraved or blindly following orders. The majority of cops appear as a huge, mindless execution party with no restraint over the use of excessive force. But this isn't a direct comment about the police (this is years before Waco), rather a typical story of a hero facing impossible odds.

At the time, the publicity for The Gauntlet was based on the action scenes, boasting 'the most number of bullet hits in a single scene', as an entire house is literally shot to pieces by hundreds of rounds. While the special effects crew planted thousands of squibs (explosive charges buried in the set to simulate bullet hits), don't tell me it wasn't easier just to shoot the hell out of everything.

Now I could watch helicopters all day long. It's a thrill to watch them lift straight up and hover. Cinematically they enable chase scenes over any terrain, as well as water (my favourite helicopter scenes include Apocalypse Now, The Spy Who Loved Me and Shaft's Big Score). The Gauntlet has a fantastic action centrepiece with some breath-taking stunt flying as Clint is chased through the mountains by a sharp-shooting assassin. Don't tell me that it's more dangerous than it looks - flying low through mountain canyons, electricity pylons and telephone poles.

The Gauntlet is even better than I remembered. Seeing it in the cinema as a teenager, I wanted more action and more blood. Seeing it now, the action is fun, but verges on the ridiculous. It's the sparky dialogue between Eastwood and Sondra Locke that keeps it continually entertaining.

What Clint did next was drift between orangutan comedies (Every Which Way But Loose and sequel), more Dirty Harry sequels and assorted cop thrillers, thinking in Russian in Firefox, and directing personal flops like Bronco Billy and Honkytonk Man. I'm summarising wildly, he's always one to watch, but I don't think he got the recognition he deserved until The Unforgiven. 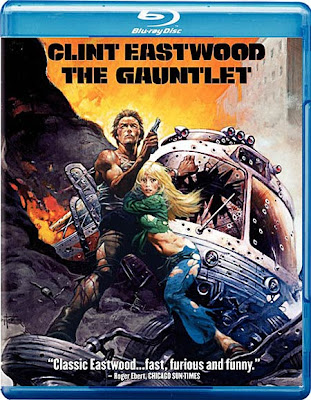 Why his orang-utan movies of this era are better remembered than The Gauntlet is beyond me. But somebody likes it, because it's now on Blu-Ray.


The Gauntlet Blu-Ray gets inspected at DVD Beaver here.

Here's an interesting aspect of The Gauntlet highlighted here on Some Came Running.