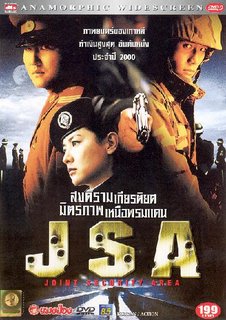 Like many fans of South East Asian cinema, I'm more than impressed with director Chan-Wook Park's 'vengeance trilogy'. So while I keenly await his next film Cyborg OK (the trailers are already online), I've just watched the film whose success enabled him to make Sympathy For Mr Vengeance. 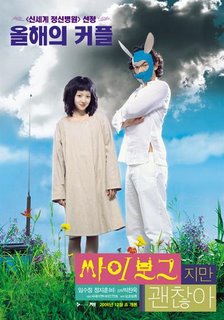 A poster for Chan-Wook Park's next film - I'm A Cyborg, But That's OK
Joint Security Area isn't as outrageous stylistically or narratively as Oldboy or Lady Vengeance, being a fairly straightforward murder mystery. But there are some directorial flourishes and a offbeat dark humour that indicate the direction he would soon take. Set in the neutral no-go area between North and South Korea, a shooting incident leaves two soldiers dead and two wounded survivors - one from each country.

A Dutch investigator, fluent in Korean, is brought in by the neutral peace-keeping force to determine exactly what happened. In prolonged flashbacks we learn about the lives of the men in the months leading up to the fateful night - a scenario the authorities hadn't anticipated... 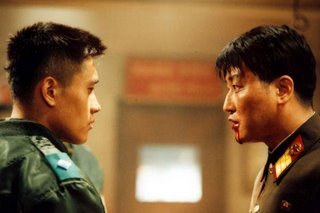 The director manages to play both sides here, delivering a violent, occasionally bloody thriller to demonstrate an anti-violence theme. The film also attempts to counter the demonisation of North Koreans as seen by the South. For an international audience, there's enough exposition to get everyone up to speed with a brief history of the country's division - certainly very relevant at the moment. Other recent Korean films braving the subject, like Ki-Duk Kim's The Coast Guard (2002), expected the audience to know their history.

The main strength of the film is the performances - the leading members of the cast all returned to appear in Park's subsequent films. The investigating officer in J.S.A. is played by Lady Vengeance herself, Yeong-ae Lee. The North Korean officer is Kang-ho Song, Mr Vengeance, also a familiar face in cult Korean films such as The Quiet Family, Memories of Murder, and this year's blockbuster The Host. The other soldiers in 'the incident' are played by Ha-kyun Shin, also from Sympathy for Mr Vengeance, and Byung-hun Lee, the lead in Park' s contribution to
Three: Extremes.

The only distraction in the film were the western actors with English-speaking parts, but thankfully they are not in many scenes. The film is otherwise very satisfying on many levels - beautifully shot, cleverly written, with an excellent cast. It maintains quite a grip throughout, because we know where the story leads... but not how it happened. It's quite hard to categorise in terms of genre, and different scenes could be war, mystery, comedy, thriller, or drama. Once again, I'd recommend this over many Hollywood films, but it's only going to be seen by those who can cope with subtitles.

This Thai DVD (pictured at top) is 2.35 anamorphic widescreen, with DTS and 5.1 audio. There's a trailer included and some behind-the-scenes footage. The English subtitles are OK, but occasionally mis-timed. Thankfully, the film has also been released in many other countries on DVD, including the UK and the US.
- - - - - - -
Posted by Mark Hodgson at 7:04 pm