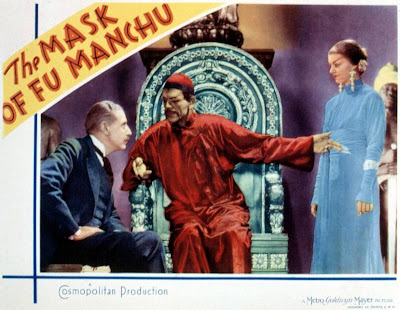 Everybody was Manchu fighting. It was a little bit frightening.

The Mask of Fu Manchu is my definitive ‘guilty pleasure’ movie. The OTT racism makes me guilty, while I enjoy a golden age Boris Karloff vehicle, an influential cliffhanger, and a complete checklist of everything the censors of the Hays Code eliminated from the screen for the next twenty years. It’s a prime example of a 'pre-code' film – sexual, violent, druggy, sadistic… 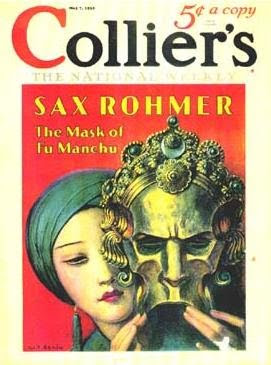 The story was hot off the presses. Sax Rohmer had just published The Mask of Fu Manchu as a serial in Collier's Magazine in the first half of 1932. The customary compilation release as a book coincided with the film’s debut in November. Out of curiosity, I’ve read the book, a Corgi paperback reprint. 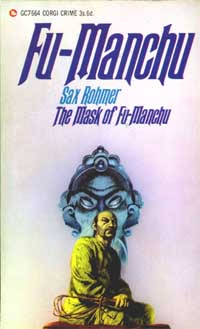 One of the intriguing aspects of the Sax Rohmer stories is the way he creates complex mysteries around Dr Fu Manchu’s crimes, necessitating some clever detective work from Nayland Smith and his scientist sidekick Dr Petrie.

This story begins with a classic ‘locked room’ murder on an archaeological expedition near Ispahan (a capital of Persia, now called Iran). British explorers are trying to locate the tomb of the Veiled Prophet, an ancient leader who was buried with his mask, sword and a revised text for the Koran, engraved in gold. They are slow to realise that local radicals could use these artefacts to unite extremist factions of Moslems from Afghanistan, India and Persia in a common cause against the west!

The explorers’ motives aren’t noble, they intended to take the treasures back to the British Museum (i.e. steal), rather than save the western world from an Islamic overhaul. As they blow up the tomb to cover their tracks, the explosion is seen as the second coming of the long dead prophet.

The hapless young Greville (as first-person narrator) is led away to Dr Fu Manchu’s hideout, where he notices glass domes, electrical equipment and sliding doors. These are only fleetingly mentioned, but spectacularly expanded on in the film. As is the hypodermic injection that renders Greville susceptible to Fu’s will – a passing reference turned into one of the movie’s most memorable tableaux.

As the party retreat from Persia to Egypt hoping to gain passage back to London via Cairo, Fu Manchu makes a move, kidnapping one of them to bargain for the artefacts. The exchange is to be held in the central chamber of the Great Pyramid. If he succeeds, the Chinese doctor hopes to bring about the downfall of his enemies when a new prophet is crowned in Damascus…

So in the original story the baddies are mostly Arabic. The film switches the action to factions of the Far East, sparing us an anti-Islamic tract. The film also plays down Fu’s use of African slaves to do his dirty work, and fails to repeat the n-word used in the book (unchanged in my 1967 UK reprint).

The story is completely restructured with many minor elements expanded into major plot points. In the story, the discovery of the fake substitute mask is mentioned in passing, again turned into a spectacular scene in the film.

The book completely lacks a climax, almost as if the plot was supposed to ‘pay off’ in a later instalment. Crucially, the Doctor wins the day! Not the sort of ending that Hollywood could use… 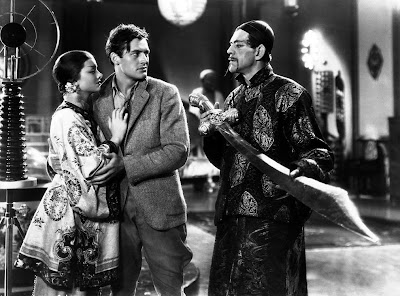 The film switches the setting at the end of the book to the start. In London, Nayland-Smith is on the ball immediately and wise to Fu Manchu’s plot. So already we’re halfway through the plot of the book. But with the action switched from the Middle East to the Gobi Desert (joining China with Mongolia), Islamic fanatics are changed to Chinese rebels. The Veiled Prophet becomes Mongol leader Genghis Khan.

At the British Museum, Sir Lionel doesn’t even get as far as the expedition, kidnapped from the Egyptian room by a gang of mummies (very Brendan Fraser). He’s then tortured by Fu Manchu to reveal the location of Genghis Khan’s tomb. (If Fu had just asked his henchman to eavesdrop, he’d have saved himself a ton of bother).

When the tomb is opened Fu gets nasty, using kidnap, mind control and picturesque torture. To try and save the day, Nayland Smith storms into an opium den, wearing the clever disguise of a stroppy colonialist, riding boots and a pith helmet.

The scrapes the gang get into would be reflected in Batman cliffhangers (a tipping see-saw over an animal pit, and closing walls of spikes) as well as Indiana Jones movies (particularly the Raiders of the Lost Ark climax). 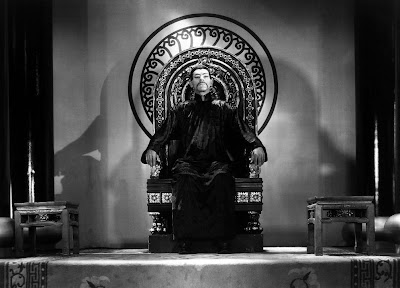 The fun is marred by the portrayal of Chinese people. It’s reminiscent of many plotlines where race simplistically implies loyalty. Like Live and Let Die, where all black people are presented as being in league with crime boss Mr Big. Race is used as a plot point, but the implication is that they are all an untrustworthy enemy. Hence all close-ups of anyone Chinese are spookily lit. Plus they’re scarred, scowling and silent, many with ‘bad teeth’ make-up.

A further insult is that any speaking parts are played by westerners in make-up. With the exception of Willie Fung, portraying a gap-toothed half-wit for comedy relief...

Despite racism being spouted by both the Chinese and European camps, the film originally ran into problems for Fu Manchu’s dialogue, prompting complaints from the Chinese government! They were rightfully uneasy that a Chinese character wanted to “conquer and breed. Kill the white man and take his women!”. MGM studios seemed to be inviting fresh controversy, right after the violent reaction to their first horror film, released earlier that year, Freaks.

Much later, the 1972 re-release prompted a Japanese organisation to appeal for the film’s removal from the MGM catalogue, on behalf of Asian Americans citizens (says Wikipedia). This presumably led to the many cuts in dialogue. This 'cleaned-up' version was still in circulation recently, for the US VHS release and on UK TV's Channel 4. As a result, the restored cuts on the DVD are from a noticeably inferior 16mm print – a visual reminder of what went missing. 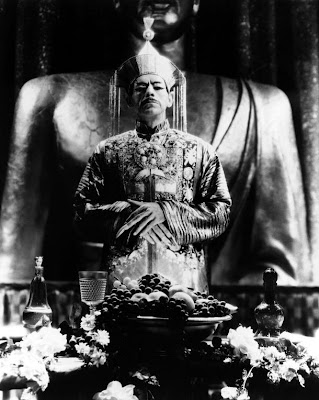 Plotwise, the film is more exciting than the book, providing escalating action and a neat ending. Also on the plus side is Cedric Gibbons' production design. So many of the sets are works of art – the doors of the tomb, the laboratory, Fah Lo See’s boudoir, the metallic closing walls of silver spikes. In contrast the opium den and torture caverns are grittily realistic. Fu also has more sliding doors (and floors) than the Starship Enterprise. The expense is all on show – the crocodile pit has a dozen lively occupants sharing screen time with one of the stars. This kind of peril was usually stock footage or an unconvincing mechanical prop.

For such an old film, this is full of surprises in terms of what you think was allowed at the time. When early pre-code sound cinema could briefly get away with onscreen murder, offscreen mutilation, extended torture scenes, repeated drug use... topped off with an overt and perverse sexual edge that ably matches the 1980 version of Flash Gordon, in which Ming's father/daughter relationship strongly resembles Fu's. 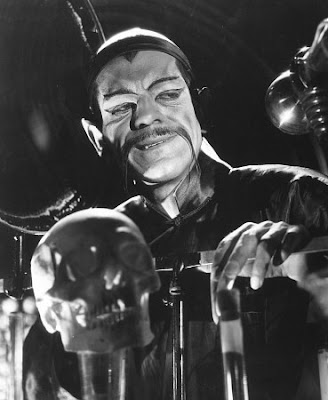 Like Frankenstein and The Old Dark House, Karloff's make-up is primarily designed to make him look monstrous, as well as Chinese. Literally a case of a Chinese character being demonised. His performance here is far more malevolent and singularly evil than his previous ambivalent hulks, or even the Fu Manchu in the books. He portrays a classic arch-villain, a sadist, a mad scientist, purely to make a hissable baddie rather a realistic character. But unlike Karloff’s other classic monsters of the period, Fu didn’t spin off any sequels. Christopher Lee had the most success with the character, in five Fu films in the 1960s. 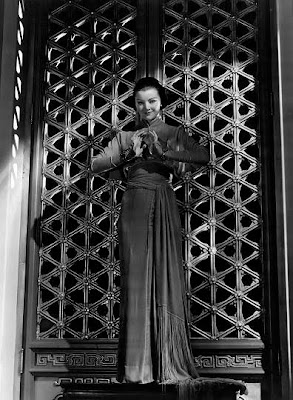 Besides Myrna Loy as his dangerous delectable daughter, the rest of the cast isn’t memorable for the right reasons. Lewis Stone (a survivor of the silent era, notably The Lost World) is solid as Nayland Smith, as is Lawrence Grant as the unfortunate Sir Lionel. Karen Morley as his hysterical daughter plays a continually shrill one-note performance. Her betrothed is played by ex-footballer Charles Starrett, who has an embarrassingly short mad scene, and a similarly brief loincloth, exposing more flesh than Johnny Weissmuller! It’s unavoidable to note that Fu’s interests seem to extend to men under his influence all being half-naked, like his African slaves and his duelling swordsmen… 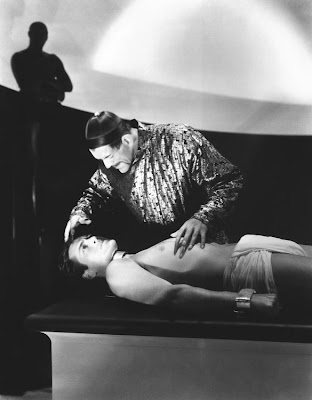 The production looks rushed in places. Gregory William Mank (in Scarlet Street magazine 24) revealed that Charles Vidor was replaced as the director and most of his footage was reshot. The long tracking shots are impressive, but also simplify many scenes to one or two shots. It always catches me that the opening tracking shot for the great iconic torture laboratory is really shaky, the worst in the film, sadly in one of the best sets. In addition, there are several instances of the cast flubbing their lines during long takes.

But I’m nit-picking, the performances are entertaining regardless. Karloff and Myrna Loy are enjoyably over the top, again prefiguring the approach used in the live TV series of Batman. The fast-moving story, stylish excess and concerted attempts to titillate with sex and violence, make this a must-see film of the 1930s. 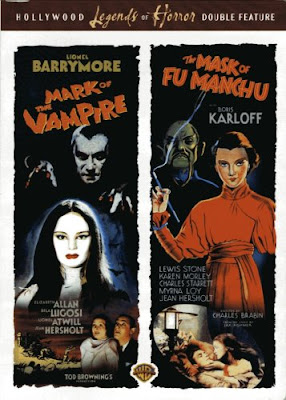 The Mask of Fu-Manchu currently on DVD is the version with the racial slurs intact. It’s on a double-bill with the London After Midnight remake Mark of the Vampire, that reunited Bela Lugosi with director Tod Browning. The double-bill is also included in the Legends of Horror boxset. The previously mentioned Gregory William Mank provides the commentary track. 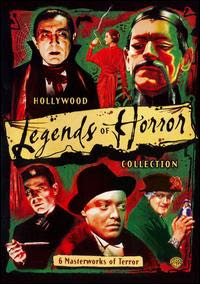 A look at various depictions of the mask through the years at NJedge.net.

A great review with lots of screengrabs at And you call yourself a scientist...

I've not seen a trailer for this, but here's a great clip on YouTube...