Last November, while I was lamenting that this movie wasn't on DVD, I mentioned that the soundtrack was only available as the old vinyl release.

See my review of the movie here...PUFNSTUF - THE MOVIE (1970)
But now there's been a new CD release containing all the tracks from the old album. It's composed by Charles (BARBARELLA) Fox and includes songs sung by Mama Cass Elliot ('Different') and Jack Wild, of OLIVER fame. 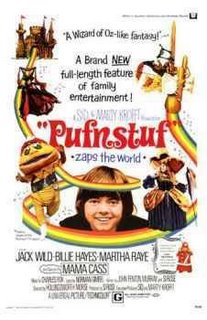 On a sadder note, in the same week that I finally got the CD soundtrack, I learn that the child star of Pufnstuf, Jack Wild, has passed away, aged only 53. I miss you already, Jack, but I'll never forget you.

Posted by Mark Hodgson at 8:25 am No comments: 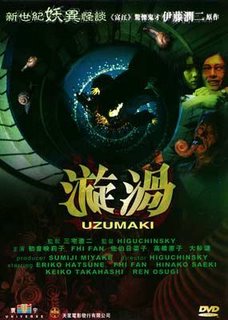 A creepy, shocking and surreal Japanese horror film, still in my top ten

Uzumaki begins in a remote coastal village where schoolgirl Kirie discovers that everyone around her is going crazy over spirals. A friend of her father becomes obsessed with collecting them wherever he finds them, like on snail shells. (Uzumaki translates as 'spiral' or 'vortex'). A schoolgirl trains her hair into spiral curls with lives of their own. Another pupil becomes fatally interested in the school's spiral staircase… As the town spirals out of control (sorry), Kirie finds herself in deepening danger. 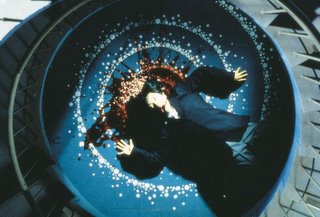 From this bizarre but simple premise, this unique tale grows into something horrific, styled somewhere between David Lynch and Tim Burton. Director Higuchinsky easily excelled himself with this surreal masterpiece.

Kirie is played by Eriko Hatsune, who perfectly anchors the film emotionally - her affection for schoolfriend Shuichi (played by Fhi Fan, above), contrasts with the horrific events around them. Hatsune previously starred in Higuchinsky's Long Dream, another Junji Ito adaption Oshikiri and recently headed the cast in Apartment 1303.

Sadao Abe makes a memorable appearance as Kirie's unwanted admirer. Abe starred as the Kappa sprite in The Great Yokai War, but here plays a ludicrous no-hope love interest, with a D.A. hairstyle that could take your eye out. Rubber-faced Abe is a creative chameleon who seems to maximize the potential of any of the surreal roles he's given. Incidentally, the schoolgirl with the Uzumaki hair is played by Hinako Saeki. It's a small part that makes a big impression. She also played the Ring fiend Sadako in the first ever Ring sequel, coincidentally called Spiral (or Rasen). Hinako appeared in another cult classic, the schoolgirl zombie fest Stacy. The special visual effects, particularly the make-up, are horrifying and increasingly spectacular - one bizarre and gory death scene had to be toned down for the original release. A couple of the subtle 'morphs' thrown in as background detail have dated a little, looking too 'digital' against the organic prosthetic effects and overall filmic look. 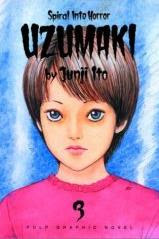 Uzumaki is based on an epic manga story by artist and writer Junji Ito. His over-riding influence has been the manga artist Kazuo Umezu. To me, his manga are the scariest horror comics I've ever seen. If you watch Uzumaki and want to read more of the stories and learn how the story develops further, the whole series has been translated and published in America in three graphic novels. The look of the movie faithfully adapts Ito's illustrations. 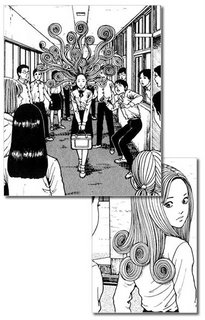 Junji Ito's horror manga have also been adapted into several other Japanese horror films, such as the scary scarecrow movie Kakashi and the many Tomie films. So far there have been seven films inspired by Ito's femme fatale. The Tomie manga, also available in English, are among Ito's earliest work and not as visually accomplished as Uzumaki. I'd also like to see someonje try and adapt the freaky Gyo, where sea creatures start an invasion of the land,

I looked up what Higuchinsky was up to, but he's unfortunately disappeared from movie-making. Long Dream (also 2000) showed promise, but I was less impressed with it or Tokyo 10+1 (2003). In a perfect world, he'd helm a proper nine-hour epic trilogy of the full epic story of Uzumaki. From his Russian website, it looks like he now directs DVD and TV coverage of stadium concerts in Japan.

Uzumaki will be re-released on DVD in the US in September 2009. It has also been released in the UK and Hong Kong with English subtitles. 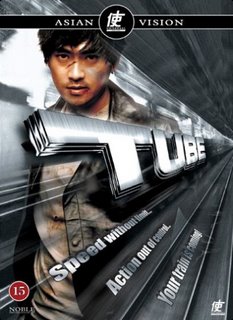 As a change from creepy horror, I watched a Korean blockbuster instead. Tube aims to emulate Western action films like Speed, whilst not having nearly the same budget. It has a certain pedigree, coming from the makers of cult thriller Shiri.

Having given up the police for a job in subway security, our hero has a chance to settle an old score when a terrorist hijacks an underground train with the mayor and a 1,000 passengers on board.

After 5 minutes into the film, you'll have a good idea of what sort of film to expect. The protaganists in the initial gun battle seem impervious to a whole army of police with machine guns. Top it off with a couple of gratuitous exploding car stunts and you'll understand that the accent is on action, and light on logic. The ensuing subway train action relies more on blue-screen fakery and CGI rather than actual stunts, so please don't expect expensive Die Hard 2 set pieces.

Having said that, the film's strength is its cast - the characters are likeable and well-acted. This being a mainstream action film, there is comedy relief on hand from Seok-hun Kim's overly angry boss. Du-na Bae, as Kim's fiesty love interest, is particularly memorable - she previously starred in the awesome Sympathy for Mr Vengeance. Though I'm not sure why she carries a guitar around for the entire film!

This isn't a bloody police vs gangster shoot-em-up - there's no gore - it's more the sort of violence you expect from a disaster movie rather than a martial arts film. That said, it still doesn't pull it's punches with the fight scenes, the impact being more dramatic than visceral.

Basically I'm trying to warn off viewers who watch Asian action films for high-class stunts and blood action, and recommend this to those interested in Korean mainstream cinema - this one not to be taken too seriously. The characters are very real, the acting excellent and the plot keeps moving briskly along with twists around every corner.

Posted by Mark Hodgson at 5:44 pm No comments: 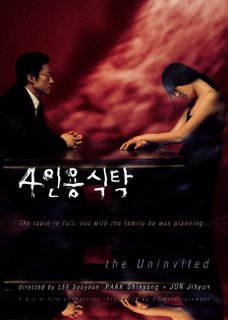 Still reeling from seeing this one.

From the opening creepy premise, the downbeat atmosphere keeps on going further down... An architect travelling on a subway at night realises that 2 little girls sitting near him, have in fact been murdered. As they begin to haunt him, his relationship and his family start to unravel. Particularly when he seeks help from a young woman who has recently lost her own child.

THE UNINVITED is a slow-moving, but gripping drama with supernatural overtones. I kept on misreading where the plot was going - it's not so much about the murder case with which the film opens, but about the case he subsequently gets tangled up in. I was confusing some of the plotted coincidences with the parallel themes that the director was exploring - I'll probably follow the film better on a second viewing.

All the characters were beautifully played, particularly the architect (Shin-yang Park) and the young narcoleptic (Ji-hyun Jun, star of MY SASSY GIRL) who have the most challenging scenes, for instance where Park has to be overwhelmed by grief.

Re-occurring themes of unwanted children and infants in danger seem to address the fears of young parents. However, there were many subtle images throughout the film which I recognised but didn't gain anything from - there was an ongoing battle between christian and buddhist icons, for instance. I felt I was missing the point, while wanting more clues as to what exactly was going on. A case of not seeing the wood for the trees, or if you like, couldn't see the plot for the subtexts.

But I mean to recommend this film. It's haunting and memorable. The dream sequences are beautifully done, and the acting is sublime. But it's the distressing shock moments that take the film into a horror movie category occupied by the similarly tragic TALE OF TWO SISTERS, also from South Korea.

The Asian Vision Region 2 DVD (not pictured here) that I saw was intended for Scandinavia, but it had a good set of english subtitles and a fine DTS soundtrack. There are trailers for THE UNINVITED, TELL ME SOMETHING and TUBE.

Probably not for cat lovers...