Not on DVD: DEATH WEEKEND (1976) your typical rape/revenge movie 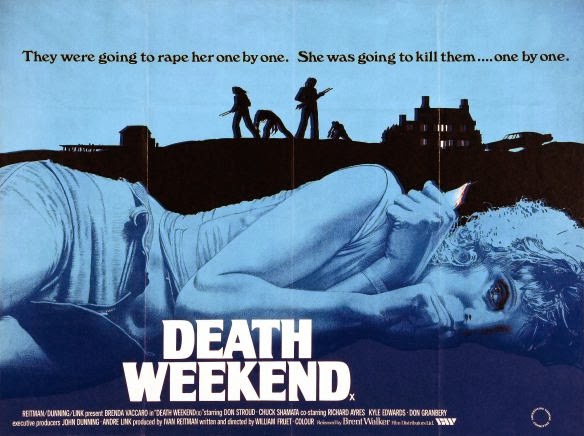 
Wanting to review Death Weekend, one of the first X films I ever saw in a cinema, set me to thinking about similar films with the same plotline, and whether to cover the movie at all. Am I a little out of my depth to be recommending a movie about rape?

The film belongs to the ‘rape/revenge’ sub-genre of horror films and psycho-thrillers, where a woman takes revenge on those who assaulted her. These films are not about the effect on her life (like TV movies or soaps do), but driven by more exploitable action – scenes of sex and violence. Obviously there are many other films about rape and revenge, but it's usually the men who dish out the rough justice.

A decade of rape-themed films began with Hannie Caulder (1971). It’s a western, but subverts the genre by having a woman take her own revenge. It’s very seventies, showing a prolonged sexual assault and having several men involved. This also means a prolonged, action-packed revenge, because she then has to track them all down, one by one. Raquel Welch plays the title character, and Christopher Lee (trying to break out of horror film typecasting) plays the gunsmith who teaches her how to use firearms.


Movie vengeance was then returned to the guys, with a string of films that showed graphic rape scenes. Some of these rapesploitation films are of course not without merit, but have obviously had censorship issues and even periods of being completely banned, both in cinemas and on video. They are all on DVD now, unlike Death Weekend.

Sam Peckinpah’s Straw Dogs (1971), took the premise of a western, but placed it in modern day rural Britain. It’s a brilliant portrayal of mob mentality and violence in a small town. Susan George plays the beautiful young wife, coveted by the local lads, with weedy husband Dustin Hoffman forced to revenge her.

Also in 1971 (what was going on that year?), A Clockwork Orange hit the screens, and in the UK also left the screens until after the director’s death. Several rape scenes set up Alex (Malcolm McDowell) as a violent problem for the government to try and cure.

Equally controversial, The Last House On the Left appeared in 1972. Two women are graphically violently assaulted, but don’t get to take their revenge. Producer Sean Cunningham (Friday the 13th) and director Wes Craven (Nightmare on Elm Street) both toned down the realism of violence in their films in order to start a long career in horror films.

Even Alfred Hitchcock made an astonishingly seedy thriller in 1972. Though Frenzy focuses more on a man who is wrongly accused of being a serial rapist. Jon Finch's character is more interested in clearing his name than avenging the victims. The villain (Barry Foster) plays a memorably nasty murderer, appearing in scenes which gave censors headaches for decades, (maybe 'I can’t cut that, it’s a Hitchcock film...').

Death Wish (1974) took the premise into crime-drenched Manhattan, and here again it's a man taking revenge. It was a huge hit and far more widely seen than Last House on the Left. Director Michael Winner pulled all the stops out for the multiple gang rape that motivates Charles Bronson's character through five Death Wish films. It’s a prolonged and nasty scene, crassly peppered with nudity (still cut when shown on TV in the UK). The film then unrelentingly justifies the anti-hero, and anyone in the audience living in a big city, to arm themselves and dish out murderous vengeance on muggers and even thieves. I shudder to think what real damage this film has done. I find the rape/revenge genre to be more balanced, because women get their own revenge. It’s a theme that’s proved popular in the slasher genre too, when the last prospective victim standing is usually a woman.


The first that I can remember in a modern setting, are two films made in 1976, Death Weekend and Lipstick. Perhaps they were inspired by the success of Death Wish, but wanting to revert revenge to the women.

Lipstick even dealt with the legal problems facing women who had been raped. The seriousness of the issue is somewhat undermined by the victim here being a fashion model, played by real-life model Margaux Hemingway. This makes the film almost surreal, especially when she starts running around in high heels, high fashion, wielding a shotgun! Chris Sarandon resigned the rest of his acting career to playing baddies, by playing the serial rapist.

The most famous movie in the genre is also the worst, I Spit on Your Grave (1978). I falsely remembered this as the one that it started rape/revenge as a cycle. After all the films had had limited runs in theatres, even under-achieving titles were suddenly hot property when released on home video in the early eighties, uncut! I Spit On Your Grave had the sleaziest video cover, the rudest name, the lowest budget. The plot is no more than rape and revenge, literally. The rape ordeal takes up the entire first half of the movie, then the second half is a serial revenge. It’s the only title in this article that I wouldn’t recommend at all.

Incidentally, the movie title, the posters and the video covers are often potent in the arguments for and against controversial movies. More people see the videos and poster art than see the movies themselves. The blue UK poster for Death Weekend certainly makes it look more lurid. Taglines like "It began with a rape. It ended with a massacre." further distort perceptions of the film.

Abel Ferrara later made an intriguing and intelligent low-budget riff on Death Wish with the actress Zoe Tamerlis as an Angel of Vengeance in Ms 45 (1981). But now we’ve strayed into the eighties, which had it’s own more responsible take on the genre, with the likes of the stodgy and overlong The Accused and the far more interesting Australian movie Shame… But here I’m trying to focus on the seventies, when the rape/revenge genre seemed to go into overdrive, and one of the earliest and cleverest films in the genre…

Death Weekend was made in Canada (note that Ivan Reitman was the producer, in between early David Cronenberg films Shivers and Rabid) and sold as a horror film in the UK, and as The House by the Lake in the US. Watching it again, it’s more intelligent and thought-provoking than I remembered. Brenda Vaccaro plays Diane, a fashion model from the big city. She’s being taken for a ride by rich young Harry (Chuck Shamata) to his remote house in the country. But she’s not stupid and certainly no pushover. The character and situations are carefully written – she’s sexy but not sexily dressed, unless you like flared jeans and baggy rollneck sweaters (contrasted with Margeaux Hemingway’s outfits, also as a model in Lipstick). When Chuck gets amorous, she says no and fully expects it to work. She handles difficult situations confidently and firmly and Harry, though extremely angry, gives up. Besides being a model, she’s an accomplished car mechanic, and can handle Harry’s car at high speed. Unfortunately, they run into a local gang of joy-riders, lead by Don Stroud, who takes personal exception to being outrun by a woman driver. This simple prejudice triggers the whole story off, as the gang track down Harry’s country house, and terrorizes the two of them for kicks.

But we’re not sure where trouble will first occur. Diane is in trouble from all sides, not realising that she’s not going to a party, but being set up on a romantic weekend for just two. Worse still, Harry’s got some hidden two-way mirrors in her guest bedroom and always takes a different girl to his house every weekend.

Like Straw Dogs and Corruption, there is an extended ‘home invasion’ where the freaky gang terrorize them both, and slowly destroy Harry’s material possessions, even his speedboat! (In a scene that seems to have inspired one of the killings in I Spit on your Grave).

The scenes of sexual assault are at least plot-driven, unlike Death Wish, which needn’t have been shown at all. Although there is brief nudity, it certainly doesn’t go as far as many others in this list, but it does introduce the use of a cut-throat razor for foreplay. As I remember it on its UK release, only the gore and the swearing was removed from the film. I was shocked at this early example of the c-word being used in a movie. The two utterances of the word are still intact on the pre-cert UK release VHS, and the US release (though some violence has been removed). 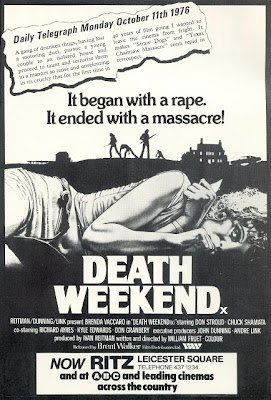 For a film in this genre, Death Weekend is far more consistent than Last House On the Left (that leavens extremely realistic and prolonged sexual assault with scenes of comic relief cops). Her ordeal is violent, but she doesn’t lose her cool, unlike the characters who ‘crack’ in the old The Hills Have Eyes or The Texas Chainsaw Massacre, where people descend to almost animal behaviour to defend themselves.

The film seems so confident that it has handled the issue even-handedly, that it dares to suggest that she might have been attracted to one her attackers. This is indicated by the ambiguous ending scene, sending out a dubious ‘mixed message’. To complicate matters further, actress Brenda Vaccaro went on to date the movie's gangleader Don Stroud in real life!

Brenda quickly rose to bigger films, with parts in Airport 77 and Capricorn One (1978). Don Stroud was forever playing heavies on TV cop shows, but tried to break the mould in The Amityville Horror, by playing a priest! That’s stretching it a bit, Don. Like many 'survival plots', the action is carefully set up so that the only course of action is murder. Nowadays I'm thankful that more films, like Park Chan-Wook's Vengeance trilogy, show up murderous vengeance as a messy business of escalation and further tragedy.

But as an exercise in revenge fantasy, I’d still posit Death Weekend as a more responsible film in an irresponsible genre. I’m guessing it’s the ambiguity of the ending is the main reason for this film not being updated to an appearance on DVD as yet. All the male revenge films are out, why not the female?

Unless you track down a VHS, you'll have to settle for these clips on YouTube...