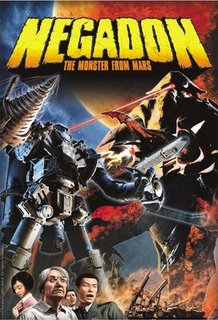 A beautiful short film, totally computer-generated, and animated by basically one man. It’s a homage to sixties ‘kaiju’ monster movies.

A giant monster from Mars is awakened by human’s terraforming the planet. It comes to Earth, specifically Tokyo, to wreak havoc. The Army and Air Force can’t bring it down, maybe an old scientist’s experimental robot can do the trick...

The visual achievement of Negadon is the constant impression that you’re looking at a shot from an old film – over two years in the making, director Jun Awazu has meticulously created a new story for his favourite movie genre.

The monster’s design is very original, and full marks to the script for not letting the characters refer to it by name – how would they know?

Besides the monster and giant robot, it’s also an interesting watch because of the time-travelling aesthetic! A CGI rendering of a sixties look is amazingly successful, with an obsessive attention to detail.

Like Japanese sci-fi films used to be, the widescreen is 2.35 extra-wide, outer space is royal blue and spaceships look like they run on wires.

The frame of reference is at times inconsistent though – some shots try to be from the sixties, other shots (like the tanks and jets) are obviously based on recent real-life footage. In the sixties, most of the shots of military hardware would have been done with models.

My other quibble is with the soundtrack. Although the pictures have been meticulously aged with faded colour and film scratches, the soundtrack is crisp and clear, and uses recent sound effects – it never sounds like the older films, and the voiceover and dialogue sounds brand new. Also the music is, annoyingly, synthesised, when it should have had some sort of orchestra, but I guess that this was a problem of time or budget. 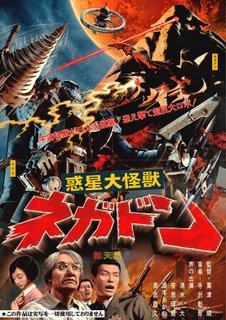 The retro poster for NEGADON
In any case, it’s quite an achievement, a modern treat for lovers of giant monsters and 'old school' Japanese sci-fi films.

I'll warn you that the running time is a brief 25 minutes, but the quality of the film is outstanding – monster movies would have had the same amount of special effects and padded it out with inane subplots anyway.

The DVD (cover art at top) compensates with a long interview with the director, an interesting look at the different elements in half a dozen key shots, as well as trailers and two of the director's shorter shorts that led up to this project.