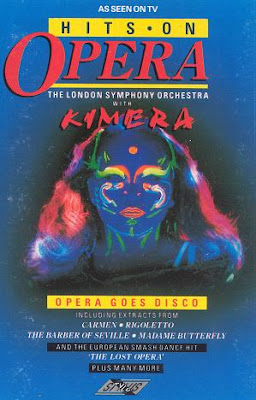 KIMERA - THE LOST OPERA
(1985, music promo video)
I promise not to do this too often.

I think I have a pretty good taste in music (doesn't everybody?). But I also really enjoy really bad music. Enjoyably bad, that is. So, at the risk of worsening diplomatic relations between the UK and South Korea, here's a pop video that has tickled me since first seeing it around 1985...

Kimera calls her music popera, a musical style combining her astounding operatic voice, a full symphony orchestra and disco... (note that Malcolm McClaren had chart success around the same time, when he artfully combined opera and pop music on the album Fans, mostly a reworking of the main themes from Puccini's Madame Butterfly. I'd also recommend this album, but for very different reasons).

The rage for disco medleys was a brief and painful fad lead by dutch group Stars on 45 in 1981. Sidestepping copyright problems, they recreated many classic pop songs and segued them together to a plodding disco beat. Both catchy and annoying, it's difficult to tell their clips from the original recordings. This tiny musical genre is haunting me at the moment and I can find very little Stars on 45 anywhere to reassess it. For some reason, the London Philharmonic Orchestra also jumped on the bandwagon with Hooked on Classics, mashing classical hits together, to a disco backbeat. The last straw was the music of The Portsmouth Sinfonia, who played similar medleys of classical music but very, very badly.

In 1984, Kimera belatedly used this Stars on 45 approach for a medley of opera hits. Kimera and her Operaiders released her first album, single and this colourful pop promo (in 1985) that seemed to land from outer space. I didn't know what planet it was from but I liked it, for the wrong reasons. Not a fan of opera, I enjoyed the eardrum-piercing genre getting a disco assassination. The music was authentically sung, the music catchy, but all entirely undermined by a drum machine and crass editing which reduced the history of opera to one pop song. The promo video looked expensive but deliriously OTT. Made in France, I think.

On YouTube, the music doesn't stay entirely in synch with the video (why is that?), but you'll get the idea...

For the climax of The Lost Opera promo, Kimera appears in darkness but is made up with luminous paint. A startling effect, undermined by the rest of the video, a car crash of live editing, colour effects, a blue-screen trip around the world, and an oriental garden set, with small birds being thrown past the camera. A stuffed tiger floats past close to the camera, as if being moved on a large turntable. It seems to be smiling. Why is it there? I'd like to know. She seems to be enjoying herself though.

So now I eventually learn that Kimera is the stage name for Hong Hee Kim, a South Korean who discovered her voice could range over four octaves. She moved to Europe, and recorded her first album with the esteemed London Symphony Orchestra. The same London-based orchestra that John Williams conducted for the Star Wars soundtracks. Serious money, but for pop. While Kimera may not have had a hit in the UK, she's successful somewhere, having cut 12 albums.

At the time, I could only find this album on cassette (pictured at top). Now, in a spate of updating my music to digital, I've found MP3 downloads of six of her albums from CD Baby, including The Lost Opera. It's also available on CD from France, like at Amazon.fr. Ah, internet shopping. All those years browsing through record shops, wasted.