HELL GIRL (2005) - the equalizer from the underworld 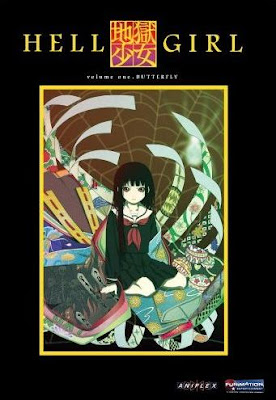 HELL GIRL
(2005, Japan, Jigoku Shoujo)
An updated guide to the girl with the internet site who's hooked up to hell
Jigoku (hell) Shoujo (girl). I got into the Hell Girl anime series, but not the Death Note movies. Though the themes are very similar, there's been a lot of noise about one but not the other. It's been a while since I last talked about this dark and addictive anime. So here's an update... Her name is Ai Enma. She lives with her grandmother in a nice little house by the river, bathed red from the eternal twilight. All very picturesque, but... her little house is IN HELL. She has a COMPUTER FROM HELL and a MOBILE PHONE FROM HELL. Her father is Enma, LORD OF HELL (a figure in Buddhist writings). I don't know what that makes her creepy grandmother, but it can't be good.
She waits for e-mails from the land of the living. Her Hotline To Hell website only appears at midnight to desperate souls with a grievance. All they have to do is enter a name. Hell Girl answers their call by taking revenge for them, by whisking the nominee straight down to hell. But if you summon Hell Girl, you have pay her terrible price... with your soul. Each episode tells a different story of human cruelty. In the first episode it's a really bad case of bullying at school. As the bullies get more and more creative in their victimisation of one girl, she cracks and seeks revenge the only way possible. She thought that the schoolyard gossip about Hell Girl was just an urban myth, until she checks out the internet... Hell Girl appears, lays out some apt hellish justice, and the girl is bullied no more. But now she bears Hell Girl's mark, guaranteeing that she too will be going to hell when her time eventually comes.

The first series started off with a repetitive string of inhumanity, with Hell Girl's brand of instant justice sorting it out. Each episode ends with her victim being quietly sailed down the river Styx through the gate to hell. While formulaic, it was certainly, strangely satisfying. Not until halfway through the series does an actual story arc appear, when a young journalist starts investigating the truth behind this urban legend... 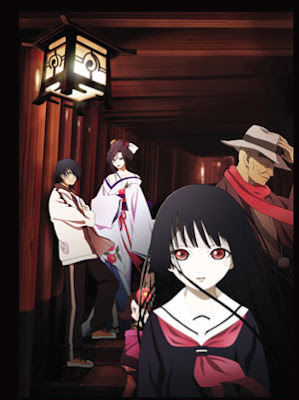 It's hard to believe that so many would use this solution, considering the price. But it's satisfying to see bad karma going around so quickly. As the series progresses, the stories of revenge get less clear cut, ethically. The anime could even be read as a discussion about capital punishment! Or you could just relax and enjoy its dark charms.

The music is beautiful and eerie (a CD soundtrack has been released for all three anime series), the atmosphere is creepy and the punishments nightmarish. The layouts are colourful and dynamically framed, conjuring up an otherworldly feel. 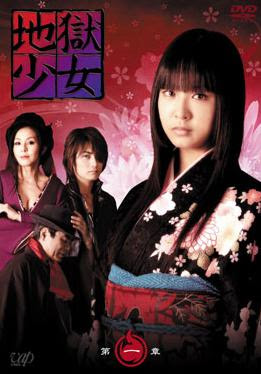 The anime was quickly remade as a live-action series, using some of the same stories in faithful recreations. There were twelve episodes in all, more frightening than the anime, but retaining the atmosphere and even the same musical themes. This is one of the best Japanese horror TV series I've seen, considering how many awful low-budget 'short story' compendium programmes have been released on DVD in the US. Sayuri Iwata played Ai Enma (pictured above).
Hell Girl's popularity also lead to a second anime series, Jigoku Shoujo Futakomori (2006) which is also 26 episodes long. This time, she's joined by a younger girl, possibly Ai's little sister. But while Ai is quite moral, Kikuri is a playful infant, with an evil sense of mischief. At one point she tries to touch grandma's spinning wheel - the sense of impending disaster is subtle, but you almost don't want to find out what would happen if it ever stopped...

Hell Girl Futakomori explores the lives of Ai's three followers, their backstories, and how they first met Ai. There are also some more difficult cases where Hell Girl's rules are stretched to their limits, not helped by Kikuri getting involved. Again, the series ends with a tense, continuing story over the final episodes, where a young (living) boy gets blamed for Hell Girl's abductions. 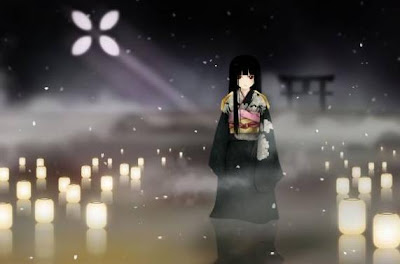 In 2008, a third anime series Jigoku Shoujo Mitsugane reached another 26 episodes. The world of Hell Girl is really starting to pass us by. While the first series is out on DVD in the UK and US, the bad news is that nothing else is. No series two or three, or the live-action series. 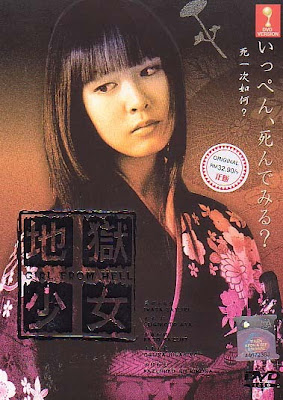 There are of course Japanese DVDs of all of these, but none have English subtitles. Presumably the stumbling block is the huge expense of dubbing each batch of 26 episodes into English. Annoying for those who just want to watch with subtitles. In Malaysia, I did see a Hong Kong DVD release of the live-action series (pictured above). Meanwhile volumes of a Hell Girl manga (inspired by the anime) continue to get translated. Hopefully, the saga will continue on DVD as well.

Hell Girl season 1 is available as a box set from Amazon and from their Video On Demand service (US only).
Posted by Mark Hodgson at 4:06 pm