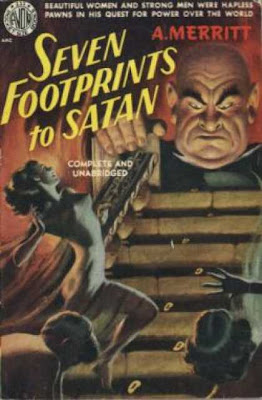 Rare, creepy Hollywood silent from the director of Haxan

A fearless bespectacled adventurer (Creighton Hale, also in The Cat and the Canary, 1927) and his fiance (Thelma Todd) get trapped in a house of mystery after panic breaks out at a society party.

They're kidnapped and imprisoned in a huge house filled with secret panels, torturers, assassins and a gorilla on the loose. Quarelling factions help and hinder them from escaping. A Chinese mystic, a dwarf and a monkey man inform them they are unwilling guests in the house of Satan, pawns in a deadly game... 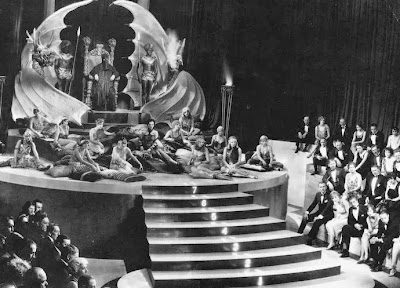 With subtle tracking shots and a masterly use of shadows, the director was already a horror veteran. Benjamin Christensen made the extraordinary Haxan (1922) in his native Denmark, an unsettling and unique history of witchcraft and demonology, visualising devils and their worship. The other-worldly special effects make-ups must have caught Hollywood's eye, though I was surprised that he could adapt to the mainstream after creating such an experimental vision. He also worked on the epic adaption of Jules Verne's Mysterious Island (1929) which, like Satan, was hurriedly adapted into a version with sound, when silent movies suddenly had to compete with the synched dialogue of The Jazz Singer. From the very first scene, the audience gets wrong-footed, misdirection sustains the surprises that literally leap out of the woodwork. These are often better staged than many modern horrors, where you can easily anticipate the next 'shock'. He often springs surprises just as a scene begins, before the audience has had time to get its bearings. 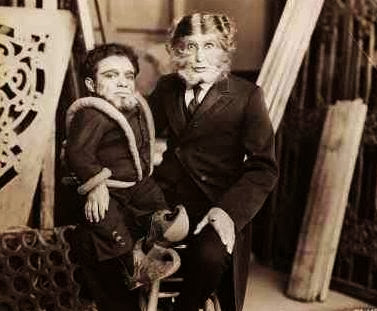 The parade of weird-looking characters predates Freaks, Angelo Rossitto appearing in both films - here (above) he has a rather strange beard. The use of animalistic make-ups look like a warm-up for Island of Lost Souls. A grotesque character on crutches called 'The Spider' reminded me of a Lon Chaney make-up - the actor is Sheldon Lewis, one of the first actors to play Dr Jekyll and Mr Hyde in a movie (in 1920). 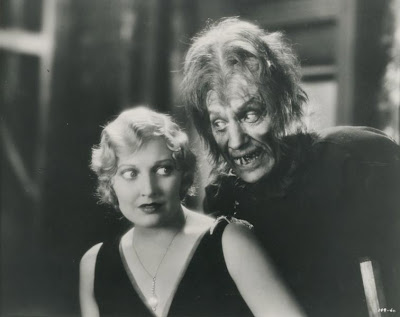 Seven Footprints to Satan has the fast pace of a slapstick two-reeler sustained for feature-length, though it's not intended as comedy. With all the sliding bookcases and hidden panels, it plays like an early Scooby Doo cartoon. I'd love to see it restored, as it should take its place alongside the classic creepy movies of the period. It's as much fun as the highly-acclaimed The Cat and the Canary, and more eventful than The Bat Whispers and Lon Chaney's The Monster. The plot twists are still rewarding at a pulp fiction level, though it's not very faithful to the source novel by Abraham Merritt, whose story Burn Witch, Burn was later adapted for Tod Browning's The Devil Doll (1936). 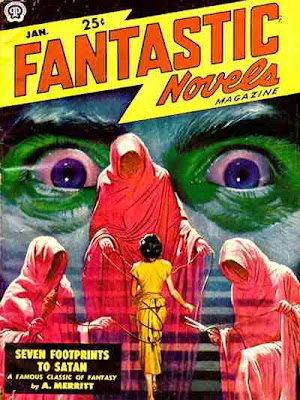 Christensen's earlier Haxan has been remastered by Criterion but Seven Footprints to Satan seems to be floundering in the grey area of 'public domain'. I've only ever seen this same wobbly, over-exposed print, with its Italian intertitle cards. Some clever person translated them all and edited a new all-English version that was briefly presented on YouTube. Perhaps that makeshift presentation will eventually lead to a proper restoration. Seven Footprints is the only surviving film from Christensen's Hollywood horrors. 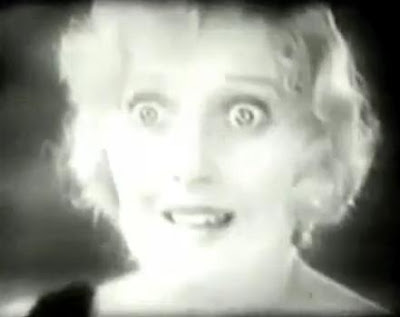 The bleached-out visual quality and scratchy print is poor but watchable, though not a great introduction to silent cinema. But it was the only way I've ever been able to watch this film in English, and there might not even be any better prints out there (there's a rumour of one possibly stored in a Danish archive). But anyone enticed by the startling publicity photos, and fans of the director or the period had better hope it'll emerge again one day soon. 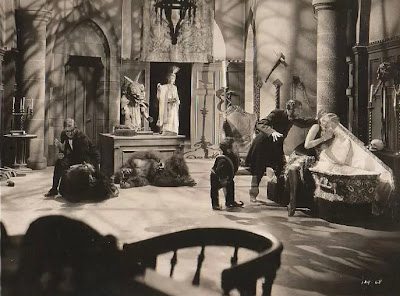 The fan-translations of the Italian Intertitles are online, listed here.

Some great stills of the leading characters, on Yesterday's Papers.

More rare stills and posters, here on Gorilla Men and here on a Thelma Todd blog.


All that I can find online now are a few clips (with Italian intertitles) on Vimeo here and here...

Email ThisBlogThis!Share to TwitterShare to FacebookShare to Pinterest
Labels: NOT ON DVD, silent movies