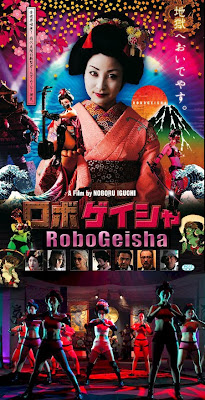 Cross the polite, subservient world of Japanese geisha with the high-tech armaments of Robocop and this is what you get. Two wannabe geishas turned robot assassins, recruited into an army of… even more robot assassins, all working for an evil mastermind who wants to… well, you’ll have to watch to find out.

But I can’t quite explain it. This movie is packed with everything that I usually enjoy in a movie: killer robots, unnecessary gore, hidden weapons, girls with guns… even a giant monster. Admittedly the fantastic trailer had raised my expectations, but the movie didn’t deliver any more entertainment. I was a little wary because I hadn't enjoyed Machine Girl, and had skipped over Tokyo Gore Police completely. All three films are from the same production team. 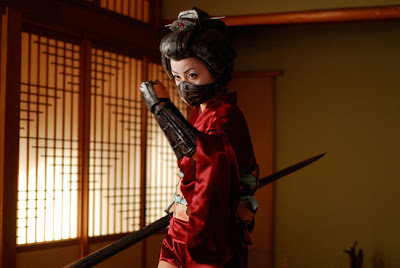 I was also cautious because these are Japanese films that have been made specifically for a US audience. Presumably that meant more women in bikinis, no sex, loads of knives and guns, and plenty of blood. All perfectly understandable elements for the exploitation genre, but I think RoboGeisha misjudges what passes for American humour.

It’s good to treat this amount of cartoon violence with humour, but it’s mostly a Japanese sense of humour which really doesn’t translate. I appreciated the excessive number of weapons springing out of every item of clothing and bodily orifice, but that's all in the trailer. The overkill of a long, slow-motion gun battle is also very dull if every gunshot is a CGI flash, and every bullet-hit is a CGI blood splatter. 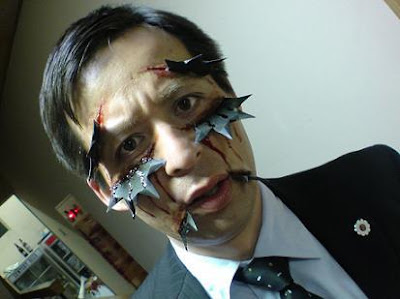 When FX make-up is used, it’s impressive, like the throwing stars in the face (above). There’s also some Savini-style blood-letting. I just wish they’d used these physical effects more, with one exception. ‘The samurai sword in the ass’ is too realistic and downright nasty to be funny (it’s in the trailer).

The constant switching between practical FX and computer wounds is very distracting. RoboGeisha has plenty of weapons, but many have no visible effect, meaning there's no threat. Even when the effect was just to have a little steam rising from someone’s acid-scarred face, why superimpose it later when they could have just blown some smoke up her shirt? 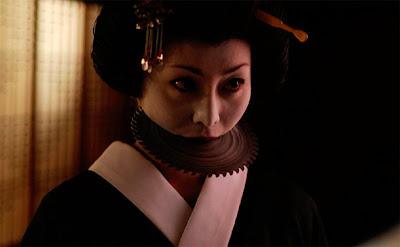 When there isn’t fighting, there’s drama. Mainly the rivalry between the two sisters, which is rather an unimaginative relationship, but well-acted. Both lead actresses are also good at comedy, but a cartoon tale of mayhem has no room for lengthy scenes of dialogue. This overplotting lengthens RoboGeisha to over 100 minutes, way too long for such a silly idea. It also takes the first half of the film to bring us up to speed with RoboGeisha’s origin.

This isn’t nearly as bad a let down as MegaShark vs Giant Octopus, with it’s similarly promising bonkers trailer. RoboGeisha delivers what it promises, but with too much repetition, too much plot and not enough laughs… 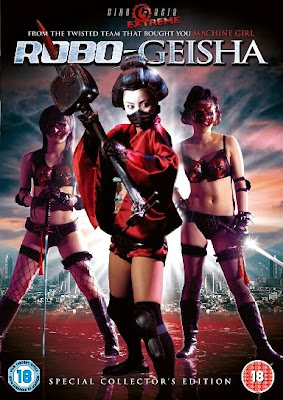 RoboGeisha is out on DVD and Blu-Ray in the UK, from CineAsia Extreme.