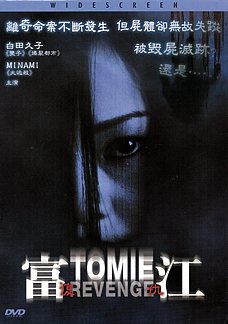 What have they done to Tomie?

So, 2 years after the last film, Tomie: The Final Chapter, we get not one, but two new Tomie titles. I was very excited about these, until I saw them...

Dr Suma knocks over a young woman while driving in the woods at night. She seems unharmed and quickly disappears. The Dr looks for the woman in an isolated mansion, where she finds 2 madmen raving "Tomie" and a woman unconscious in a sleeping bag. What on earth is going on?

We learn more at the nearby hospital where Dr Suma works. She gets questioned by two 'National Security men' looking for Tomie, who think that she has the power to physically invade other women's bodies. They think she is living nearby in the woods...

Well, the first place I'd have looked would be the mansion! But here it takes a whole hour of screen time for anyone to figure that out!

The possession theme means that Tomie barely makes an appearance in person, her female victims get all the action. I also think possession is also Tomie's least interesting power - here it seems to be her only skill.

I was disappointed to find that this had been shot on video, the opening night scenes looked especially murky and smeary. This low-budget production is an example of the perils of v-cinema titles, they rarely deliver (The first two Ju-on v-films are a notable exception).

I was confused by the narrative and the shaky handheld camerawork. In was disappointed at how poor some of the acting was. The messy and very short story ends with a surprise that cheats rather than satisfies. The whole thing is missing the atmosphere of Tomie's creepiness. The writer/director is Ataru Oikawa. His previous work includes Tokyo Psycho, which I will be avoiding.

In its favour there's some convincing drama from the two leads, Dr Suma (Hisako Shirata) and her boss (Kyusaku Shimada, the lead heavy in Princess Blade). There's also and a couple of gory scenes we haven't seen in the series before, but they're misjudged, overplayed and don't resemble anything in Junji Ito's drawings.

The sound mix is uninvolving and lazily pumps up the volume to prop up some rather obvious leaping-out-at-the-camera scares.

I can't say anything nice about Tomie: Revenge. It makes the first 5 Tomie's look even more consistent, imaginative and carefully crafted. I'd even recommend the made-for-TV Tomie: Another Face over this one. I also won't recommend this to Tomie completists because it's so divorced from the source material.

The Hong Kong DVD (pictured above) has good subtitles and an anamorphic widescreen presentation. The audio sounded like a rushed stereo mix. There are just 2 trailers as extras. The film is due to be released on Region 1 DVD in the US.