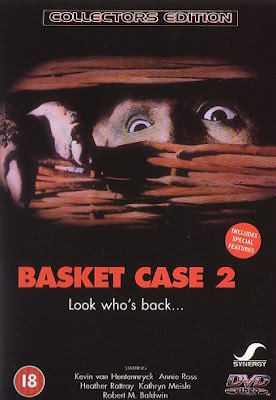 I'm always disappointed if I don’t see something new, but Basket Case 2 delivers a cast of characters you won't see anywhere else (except of course in Basket Case 3). The extensive prosthetic masks are limited in expressiveness, but the designwork and sculpting quickly and successfully convey character and make an immediate impression.

Like, one guy is all noses, one is all mouth, another is all teeth... They lurk in a huge shadowy attic, potentially a place of nightmares. But while they look scary, crusading all-American mom Granny Ruth treats them all like an oppressed minority, which they undoubtedly are. The Frank Henenlotter twist is that they also solve their biggest problems horror-movie style, resulting in murder, madness and mayhem.

Moments after the events of Basket Case, this sequel kicks off with Duane and Belial on the run from the police, quickly finding refuge with Granny Ruth, who runs a secret hideaway for other disfigured outcasts. While their newfound happiness depends on secrecy, they soon need to evade a journalist from the gutter press, who's desperate to find the 'freak brother' killers of Times Square.

Meanwhile, Belial tries therapy to deal with his addiction... to ripping off people's faces. This he continues to struggle with, resulting in some grisly scenes, at times poorly served by the garish lighting and distant camera. The make-up effects certainly looked ten times nastier in the Fangoria and Gorezone magazine photo-spreads of the time.

Basket Case 2 is less effectively bloody, but builds upon the bizarre humour of the first with a mad story and a continuous supply of fresh mutations popping up throughout - every time you see a group of 'unique individuals', there's a new 'face' among them. Granny Ruth is the extreme embodiment of politically correct, bravely treating Belial like everyone else, despite the danger. Treating her 'unique individuals' as unquestionably normal is at once satirical, inspirational, and a huge stretch for many of us.

Director Henenlotter confidently balances the sensitivity surrounding 'freak' movies. Here, the only characters who use ‘that’ word are the villains. Freaks (1933) and The Mutations (1974) were both problematic for using actors with actual physical abnormalities. But in Basket Case 2, the effects are so exaggerated that they couldn't possibly exist, and are represented by actors in make-up, in a similarly comic book style to Alex Winter's later Freaked (1993). 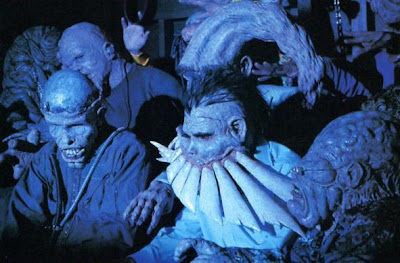 Annie Ross as Granny Ruth gives a standout performance - gleeful, obsessed and blind to the deformity that surrounds her. With Kathryn Meisle as a ruthless newshound, and Heather Rattray as Granny’s assistant, Susan, the film is dominated by strong-minded women. Like the first film there are also a few non-actors threatening the believability of an otherwise professional-looking film, but you won’t forget the freakshow barker in a hurry – he totally looks the part. Ted Sorel makes a late appearance as a private detective - he starred in Stuart Gordon's follow-up to Re-animator, From Beyond (1986), where he starred as the monstrous Dr Pretorious.

Although it picks the story up at the end of Basket Case, eight years have actually passed and the cast has visibly aged. Kevin Van Hentenryck's performance now seems slightly out of step with the mostly professional cast, his acting being pushed to its limit by playing having to play Duane tipping over into dementia.

Belial again suffers continuity problems, represented by several different puppets even within a single scene. Chillingly, at one point he breaks into demonic laughter, his face animated by an actor in make-up (who I believe is Van Hentenryck playing his own brother). Overall, it's uneven, but typical of the Henenlotter universe, the fun is in the ideas. Belial even gets a girlfriend, who's a freak like him, with a beautiful face that always reminds me of Daryl Hannah.

This is a much more slick-looking film than the first, though it still has 'a 1980s straight-to-video' look. As in, there are modest and convincing sets and lighting, but they're not Hollywood flashy. The story doesn't feel at all inhibited by the budget. 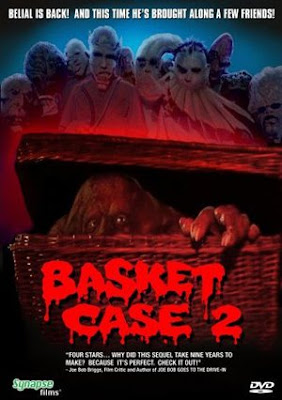 Synapse DVD brought out a special edition that cramps the classic VHS aspect of 4:3, cropping it down to 16:9, but the colour and and clarity is vastly improved and there are a meaty hamper of extras. FX man Gabe Bartolos presents his footage of the extensive make-up effects that also includes a look at the filming of Frankenhooker, which was produced alongside. An interview with Henenlotter reveals that Basket Case 2 was only an afterthought in the deal, but is easily the stronger film of the two.

I was distracted by most of what Bartolos says in his modern day introduction, filmed in a working crematorium! The background activity is quite literally horrifying, and not for the easily upset.

The 4:3 'Collector's Edition' (pictured at top) was available on DVD in the UK, looking like it was taken from an unremastered analogue source, suitable for anyone nostalgic for the straight-to-video look. They manage to misspell Kevin's name on the cover and the only 'special features' are trailers.