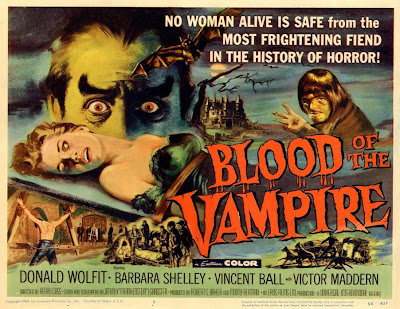 (updated in April 2014, to include French Artus DVD release)

A heartless doctor is using his 'lunatic asylum' patients for merciless experiments – trying to separate human blood types into categories in order to perfect successful transfusions, utter madness!
This doesn't rate as a horror movie by modern standards, but pushed the boundaries to their limits in a different era. It's a fascinating look at the changing perception of movie violence. This was once a censors' nightmare, but now appears on DVD uncensored and PG rated. Does that mean in fifty years time the shock value of Hostel and Saw will be treated just as lightly?

For fans of early Hammer films, this is a must-see, especially as it's written by Jimmy Sangster who scripted many of the first successful Hammer horrors, helping launch the studio worldwide. While this doesn't have the supernatural atmosphere (or the incisive direction), it's an interesting comparison. 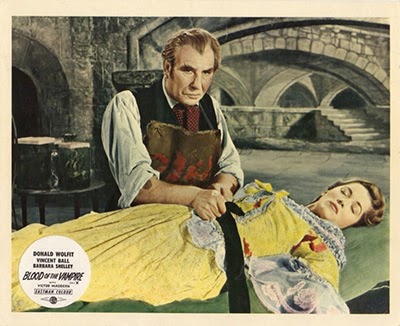 This could be classified as an Eros Film, the distributor used by this production team (Monty Berman and Bob Baker) who also made lower budget horrors The Trollenberg Terror, Jack The Ripper (1959) and The Flesh and the Fiends before successfully producing most of the jewels of ITC's TV hits like The Saint, The Champions and The Persuaders. There's no nudity in Blood of the Vampire (just suggestive leering and manacling), but the following year Jack The Ripper would include topless shots, allowed only in the continental versions (my comparison of those scenes is here).

My opinion of the film has changed now that I've seen a decent remastering of the film. On DVD it looks better than it ever has, less seedy, poorly framed and grainy than it appeared on VHS and old TV screenings. Now it looks closer to an expensive production, with lavish sets (far roomier than Hammer) and impressive matte paintings. The amount of bloody violence makes this a worthy companion to Hammer's Curse of Frankenstein and Horror of Dracula, whose thrills it carefully emulates (a gunshot in the eye and a head in a jar, like Curse, a bloody staking like Dracula) presumably to sneak as much past the censors as possible ('you let them show it'). 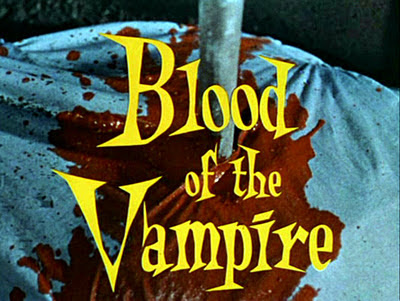 The story is even a mix of Frankenstein and Dracula, played as a nasty adventure in medical experimentation. OK, we now know he wasn't a mad doctor, he was on the right track. But his methods are a little unorthodox...

Sir Donald Wolfit (who you can also see in Lawrence of Arabia!) took a break from performing Shakespeare in British repertory to play the obsessive Dr Callistratus. He’s far better here than he was in the first colour version of Svengali (1956) and certainly makes this more enjoyable. 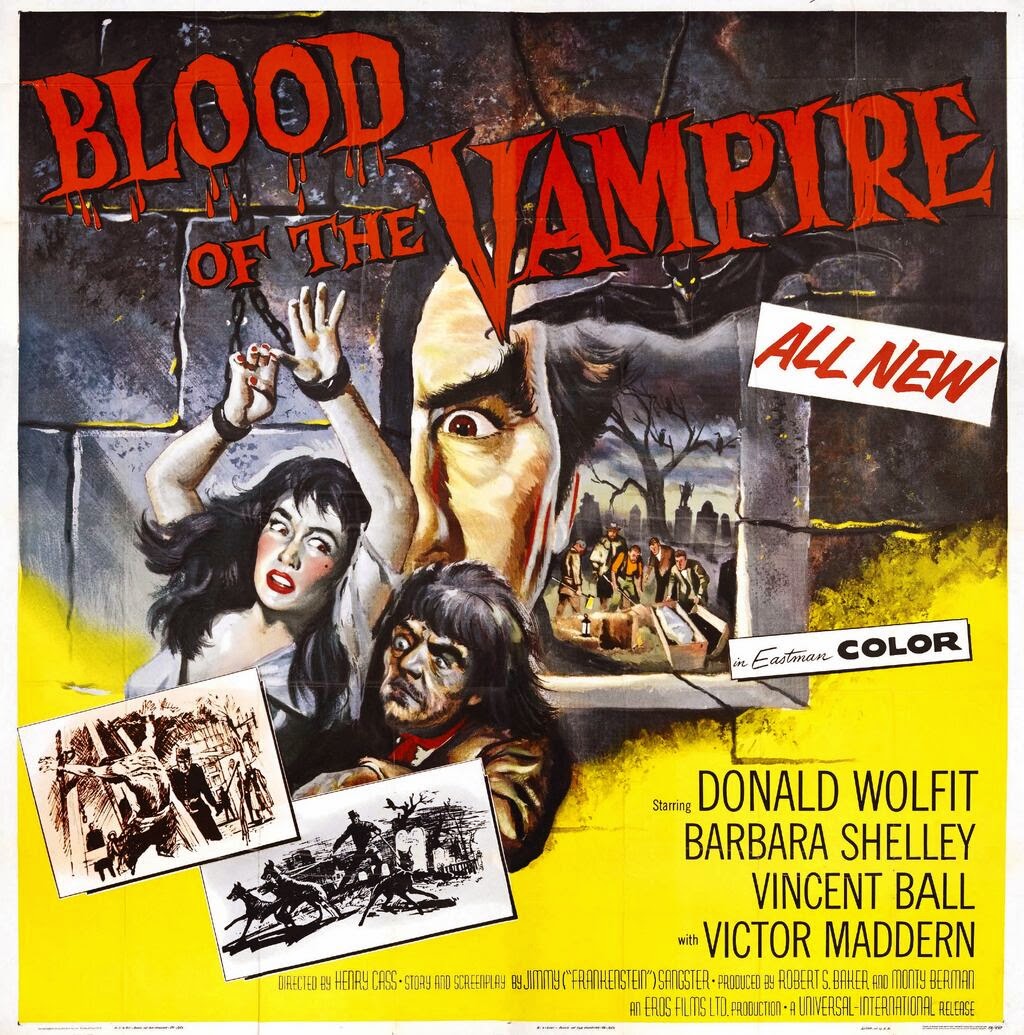 Besides Wolfit, the best reason to see this is Barbara Shelley, one of the most accomplished actresses to appear in Hammer Films. Particularly Dracula Prince of Darkness (1966) and Quatermass and the Pit. She hasn't much of a character here, but ably endures many difficult scenes, being ravished and ogled by the bad guys. 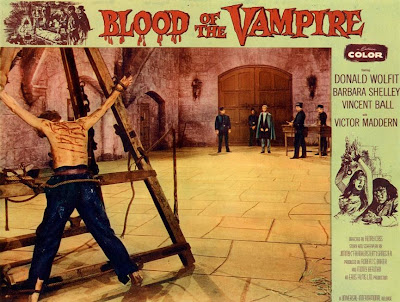 The original publicity photographs have long teased horror fans since they appeared in 1960s' monster mags. The photo of the flogging victim was strong stuff even in black and white. But some of these images were from censored scenes, resulting in disappointment when we eventually got to see it. Over recent years, through a progression of three DVD releases, these scenes have all re-emerged from the darkness... Blood of the Vampire first surfaced on DVD in 2006 as a region 1 US release (from Dark Sky) a double-bill with The Hellfire Club. It includes some censor cuts (not seen on British TV), but they are jumpily integrated into this print. Besides film weave and an unavoidably grainy image, this version is compromised by a zoomed-in image on several scenes, that crop the lower edge and sides of the picture. For the most part, the framing is acceptably tightened to 16:9 from 1.66 (the original ratio shown in the opening titles). 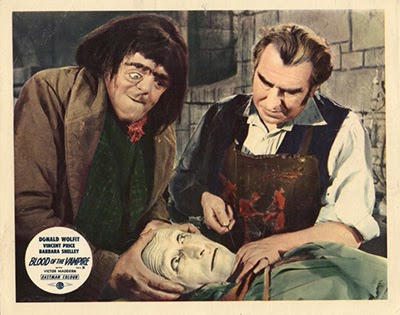 Some of the additional shots (that I hadn't seen on earlier TV screenings) reinstated the head in a jar (!) and some spurting blood being decanted during a transfusion (this glimpse is still cross-faded out in the UK DVD).

There's also a jovial and informative commentary track, Hammer historian Marcus Hearn getting the most out of writer Jimmy Sangster and producer Bob Baker.


Then there was the region 2 UK DVD from Simply Home Entertainment in 2007. The image quality is similarly grainy but has slightly more depth to both detail and colour. While the image suffers a little too much digital scratch-reduction on both the US and UK discs, I'm not expecting a practically unknown film to look any better without a ton of far more expensive restoration work.

The UK version is better framed overall, with none of the strangely zoomed-in scenes of the US DVD. Though the opening scene and titles are better presented, full height and less cropped, on the US disc. Both DVDs are presented anamorphically for 16:9 screens.

The UK DVD has an entire extra scene with the housekeeper strapped to the operating table, though nothing scandalous happens. The censor seemed preoccupied with what was being infered. As far as I could tell, the other cuts have been restored, apart from the blood spurting into the jar.

The UK disc also lacks any extras, and is sadly missing the commentary track. But most of the information that was discussed is included in a packed colour 16-page booklet of posters and photos.

For frame grabs from the US and UK DVDs, and an alternate opinion of how they compare, see this page from Mondo Esoterica... 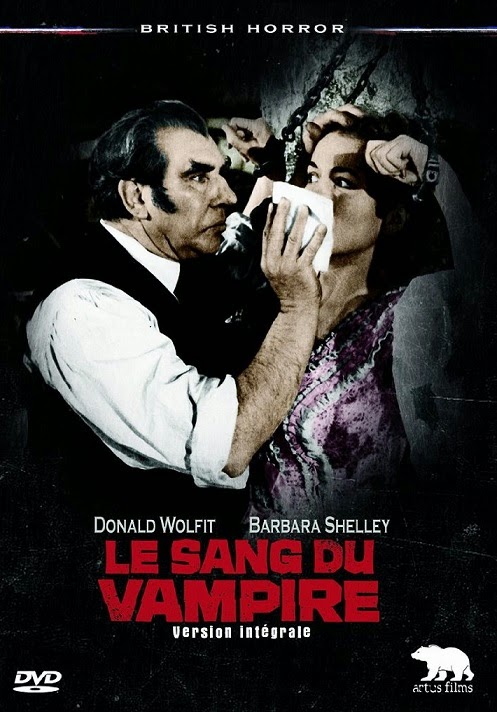 Finally in 2013, there is this 'Version Integrale' region 2 DVD from Artus Films in France, announced as the complete version. Sold as Le Sang Du Vampire, it not only contains the spurting blood and the head in a jar (from the US DVD) and the housekeeper scene (from the UK DVD) but also the long lost manacling of Mary Marshall (as seen below)! We've been discussing that scene in the comments (at the end of this post) and it's a relief that I've finally seen it. The capper is that this restored scene shows not just two, but four women chained to the dungeon pillars! The quality of these long-censored scenes is notably poorer, scratchier than the rest of the film. There's a clumsy transition (a crossfade) during the tracking shot from the severed head, between a bad and good film element.


Gushing and spurting blood was a whole new problem for censors, now that it could be seen in colour. These censor cuts are now more fascinating than the slim story, in what was a pivotal year. Also in 1958, Hammer's Dracula was censored (scenes that have only just been reclaimed) and Horrors of the Black Museum was released. That has a far more sensational reputation, but shows far less than Blood of the Vampire.

The manacled maidens scene was presumably more problematic because of the lascivious look in Victor Maddern's remaining eye! The Artus DVD also restores and extends a few additional scenes or leering and bloodshed, none of which would increase the certificate from PG if it were ever to be released in the UK.

The French DVD is presented widescreen anamorphic with English and French audio options and removable French subtitles. It also looks slightly more colourful than the UK DVD, which was my previous favourite version. The extras are an appreciation (all in French) an extensive montage of posters and lobby cards and a trailer.


More examples of the fantastic Blood of the Vampire lobby cards, here on Four Color Comics...