HORRORS OF MALFORMED MEN (1969) - beyond surreal 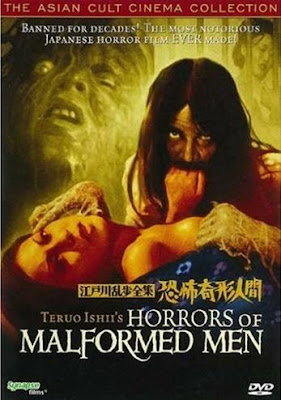 HORRORS OF MALFORMED MEN
(1969, Japan)
I’m currently enjoying a stream of late-1960s/early 1970s Japanese movies - a rich vein of surreal and outrageous horror films and lurid thrillers. Women are often topless, art direction is saturated in colour, photography could be arthouse but the stories dwell on the surreal, the sadistic and the taboo-breaking. Intrigued by the fantastic Female Prisoner Scorpion series, and such transgendered film noir as Black Lizard from Kinji Fukasaku, I’m being fed by some welcome new DVD releases in the US.

Horrors of Malformed Men is a rare beast indeed, a film not even available in Japan anymore. Out of respect for the physically handicapped, this is seen to equate physical with mental aberration. But that’s quite a narrow reading of this astonishing film, and luckily it’s been restored and released on DVD in the US by Synapse Films. 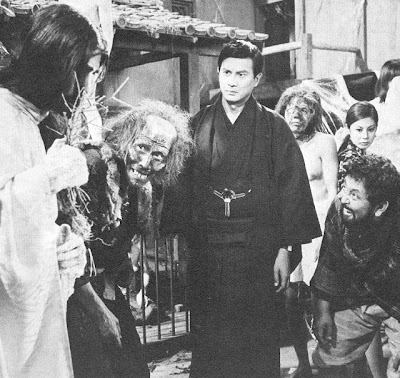 I was especially keen to see it, having waited patiently since seeing an enticing photo in Denis Gifford’s Pictorial History of Horror Movies in the early 1970s. In the DVD extras, it’s mentioned how the film wasn’t shown outside of Japan for decades – making me question whether Gifford himself saw everything in his book, which I’m still attempting to do.

From the picture, I was expecting a Japanese rip on Island of Lost Souls (the H.G. Wells novel adapted three times by Hollywood). Horrors of Malformed Men far exceeds my teenage expectations, for that's only a fraction of what's in store.

It begins with a scene of mad outlandish sexual fantasy, with a confused man surrounded by half-naked women behind bars. While expecting him to awake at any moment, I was surprised to see that the scenario was actually happening. The film continues with many dream or fantasy situations as part of the story’s reality. He appears to be trapped in a paranoid nightmare, as an inmate in a psychological institution. He escapes to a circus while straining to remember who he actually is. His vague memories lead him to a rich man's mansion, where he contrives to pose as the dead owner, who he closely resembles. The story turns into a wish fulfilment fantasy of owning plentiful money and property, he even has his own island! As he goes exploring, he discovers his mad dad has started a fantasy island of naked women and surgically-engineered freaks…

But I’m telling you the plot. Full of lascivious and bizarre interludes, all fuelled by the stories written by Edgawa Rampo, who is back in vogue today with more films based on his written works. The late director Teruo Ishii (Jigoku, 1999) explains, in an interview on the DVD, that he thought he wouldn’t get another chance to direct any stories by Rampo, and decided to work in elements from his other favourite stories. Meaning we get such wonderful asides as the man living inside a sofa in order to feel up the owner.

The mad dad in the story resembles a bearded Sadako – long black hair falling over his face, his contorted moves and appearance by a stormy coastline are straight out of Ring and Ring 0: Birthday, but thirty years early. He’s played by a famous dancer and contortionist Tatsujmi Hijikata, who here performs an early incarnation of the frightening Sadako walk.

Despite all the traditional kimonos, we’re reminded that it’s the 1960s by an eye-popping psychedelic scene where silver-painted dancers perform in front of rotating mirrors. Although the times were a-changing, the censor still appears to have drawn a line - as the editing gets a little quirky during the siamese twin operation scene, and a breast-cutting torture in the women’s prison.

I recognised Hideo Ko, the creature from Goke, Bodysnatcher from Hell, even though he appears at one point in full drag, rather an odd uniform for a Prison Governor. Teruo Yoshida, as the central character, was also in Goke. 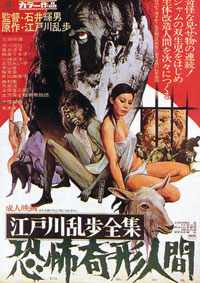 This is an extraordinary movie. Synapse has included some welcome extras, including interviews with two famous fans of the film, directors Shinya Tsukamoto (Nightmare Detective) and Minoru Kawasaki (Calamari Wrestler). They help give the film a much needed context for the film’s reception in Japan. The film itself looks brand new, presented 2.35 anamorphic. The region 1 NTSC DVD also has a reversible cover, revealing the original Japanese poster art.
Posted by Mark Hodgson at 10:13 pm