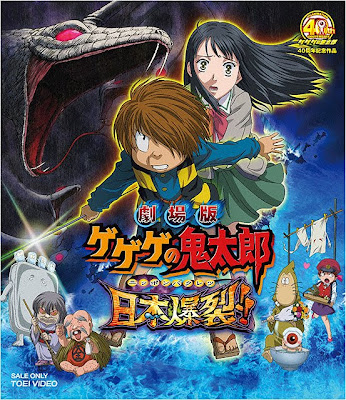 GEGEGE NO KITARO: NIPPON BAKURETSU
(2008, Japan)
The first ever feature-length animated Kitaro movie, released as part of the anime series' 40th anniversary, was almost lost among the many other Gegege No Kitaro productions in 2008. There was the second live-action film, the weekly anime series, as well as an OVA mini-series.

Nippon Bakuretsu, (roughly translated as Japan Erupts!) is animated in the same style as the 2007-2009 TV series, featuring all the regular characters and indeed, as many different yokai monsters as they could possibly cram in.

The story begins as usual with a spooky local disturbance, as a schoolgirl is harassed by some scary mirror demons (alarming silvery CGI claws), trying to pull her through to another dimension. Her home life is not untroubled as she has trouble pleasing her extremely strict mother.

Luckily she knows where to find Kitaro's post box and calls on the ghost boy to defend her from the mirror demons. But that's not the end of her problems at school or at home, because she's unwittingly involved in a demonic plot that threatens the entire nation of Japan with destruction that not even Enma, the Lord of the Underworld, can prevent... 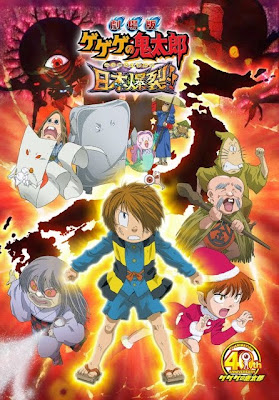 The film is quite episodic, with three distinct 'chapters', almost like gaming levels, with foes that keep getting tougher. The final 'boss' that Kitaro faces is the largest yokai monster I've ever seen!

While the animation effects and creature designs are impressive, it all still looks like the TV series with an expanded budget. There's still spectacle and dynamic action that the live-action feature films lacked, I just wouldn't volunteer it as an example of a typical modern Japanese anime feature. 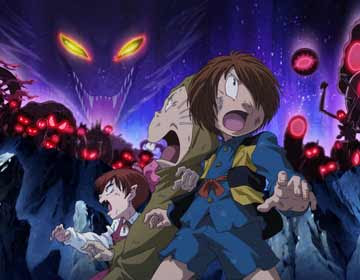 While the latest series has been moodier and scarier than its predecessors, the film shows Kitaro taking more of a beating than usual, with several scenes that would upset his youngest fans. A couple of the lizard monsters were also quite sexual in appearance, another departure from the family-friendly series. I'm not saying this is anything as strong as Legend of the Overfiend, but at one point a flurry of tentacles, teeth and one-eyed monsters did remind me of it...

Gegege No Kitaro: Nihon Bakuretsu is out on DVD and Blu-Ray in Japan, but also on a far cheaper Taiwanese DVD, but none of these have English subtitles. The Taiwan DVD is a good-looking 16:9 anamorphic image, with optional Chinese audio and subtitling.

For more about the many TV and movie incarnations of Gegege No Kitaro, here's my extensive overview.


Lastly, here's a Japanese trailer for the movie on YouTube...