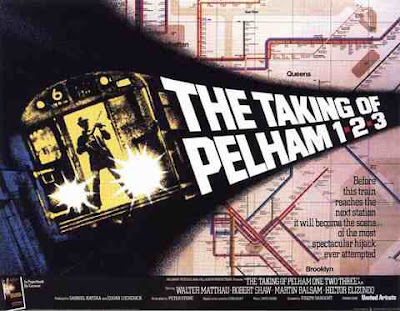 THE TAKING OF PELHAM ONE TWO THREE
(1974, USA)
The original.

This has been remade twice, as a 1998 TV movie and the 2009 Tony Scott remake. But hey, enough. I'm giving up ranting about remakes, even when they pick my favourite movies. Time to take a deep breath and say, "to each their own".
I'm guessing that your favorite version of, say, Dracula is the first one that you saw. Once something has impressed you, other versions rarely measure up, whether they're older or newer. I first saw Christopher Lee as Dracula. He's the best Count. Not Bela Lugosi, not Gary Oldman, not Leslie Nielsen. A large part of enjoying a movie is where and how you see it, and the reactions of the people you're with. Anyone else's opinion of the film can't compete with that.

But grant me this: 'newer' doesn't automatically mean 'better'. This deal works both ways. 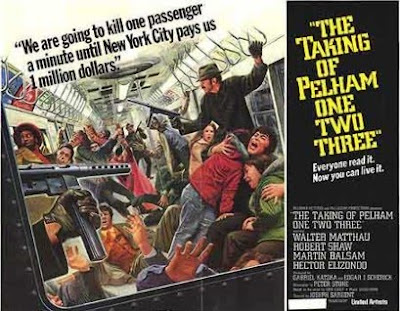 The Taking of Pelham One Two Three was a best-selling book, and then almost immediately a hit movie. While on holiday in New York in 1973, my parents had been too scared to travel on the subway, even during the day. Only later, after seeing films like Death Wish and The Warriors did I come to understand more about Manhattan's reputation in the early 70s. I first saw Pelham in London in, I guess, early 1975. It gave me more reasons to be scared of the New York subway. But of course, it's only a movie.

At a time when airplanes were regularly being hijacked, this story provided a landlocked twist. A group of gunmen hijack a busy subway train. Before the transit authority has time to react, the gang has locked down a carriage full of passengers, stranded it in a tunnel, and are threatening to kill them one by one if their demands aren't met. There's only an hour for the mayor, the police, everyone to cooperate to meet the deadline...

It's a deadly situation, but the approach is to make it look realistic - with people reacting as themselves rather than representatives of institutions. The Mayor is more concerned about the flu than the press. When the hijackers first make contact, the supervisor shouts at him for screwing up the intricately timetabled transport system! It's surprising that it's grimly funny, especially the use of New Yoik black humour - they've seen it all and are ready for anything.

I still really enjoy this, from start to finish. David Shire's opening theme music grips instantly and the story kicks in immediately with the crime already in progress. The story keeps on giving right up until the final shot. This isn't one of those caper movies where the team is slowly assembled and they think up their plans. We learn about the hijackers as the crime progresses, but in subtle dialogue references rather than flashbacks.

The tight script delivers suspense all the way, both in the race to meet their demands as well as inside the train. I don't remember so much of the swearing, making me think that it may have been toned down in the UK to get an AA certificate (no one admitted under 14 years old).

The events look totally realistic, I don't think there's even any back projection. The subway carriage looks like it's the real deal parked in a real tunnel. The extensive location filming above ground, on the streets of Manhattan, add to the realism and the excitement, especially when a police car speeds through the busy streets.

Some familiar faces fit snugly into their characters - Dick O'Neill (The Wolfen), Jerry Stiller and Walter Matthau (pictured) all look the part as cynical transit supervisors, all sitting in what look like the actual subway control rooms. This is one of Matthau's semi-tough roles at a time when he bounced between comedies (The Front Page) and tough guy thrillers (Charlie Varrick).

Robert Shaw (Jaws, Black Sunday) shines by underplaying the leader of the gang - although he's recruited a crew of armed thugs, he subtly kills time with a book of crossword puzzles during the height of the siege. Martin Balsam (Psycho) works effortlessly with shaw, while a young Hector Elizondo plays a memorable racist lowlife amongst villains, though he's almost unrecognisable in his 'tache and specs' disguise.

Julius Harris (Tee Hee in Live and Let Die) adds weight as the police commissioner, though doesn't have too much to do.

Thankfully the casting breaks the mould and doesn't resort to using minor TV celebrities for the hostages, unlike many disaster movies of the time. No need for backstories, these are a realistic, only slightly stereotyped cross-section of New Yorkers, played by practically unknown character actors. Their lines, often funny, are almost thrown away as background dialogue in all the chaos. In the end credits they're listed by appearance and not names - just don't ask me which one The Homosexual was, he wasn't even stereotypical enough to stand out.

This was a major hit at the time, almost perfect as a thriller, and continued to be re-released for several years afterwards. I saw it again as a support film for Burnt Offerings! 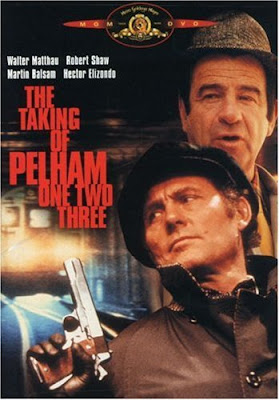 I think this has long been out of print on DVD in the US and UK - I watched a ten-year old disc (pictured)! It's 2.35 widescreen but non-anamorphic, and is disgracefully overdue for a re-release.

A New York perspective on the film - review on Bright Lights Film Journal.