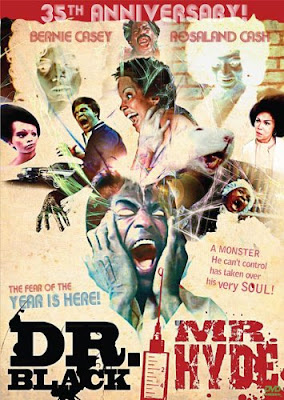 In the 1970s, low-budget 'blaxploitation' films took a stab at most movie genres, including horror. One of the more successful is this reworking of Dr Jekyll and Mr Hyde…

A successful black scientist called Dr Pride, is trying to find a serum to cure liver disease. He has a beautiful, intelligent girlfriend, Billie, who’s also a scientist. Under pressure to get results, he starts cutting ethical corners by testing serums on human rather than animal subjects. Aslo developing a drink problem, he starts hanging out at low-life bars, where he befriends a prostitute, Linda.

Caught between two worlds, and taking the serum himself, his life splits into a black half and a monstrous white half. As 'Hyde', he’s unable to control his impulse to kill… 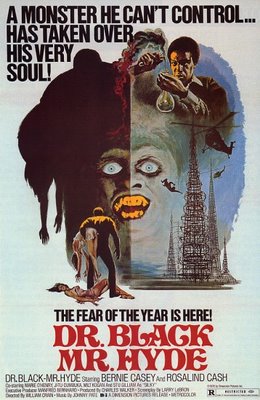 Many plotlines are introduced that lead to dead-ends, and it’s hard to believe Pride’s motivations, such as cheating on his girlfriend, played by Rosalind Cash, an actress who shone in The Omega Man as a tough cookie who could give Cleopatra Jones a run for her money. Unfortunately her part here is quite small, as Pride gets more interested in Linda.

As the title character(s), ex-footballer Bernie Casey doesn't clue us in much as to what’s going on in his head. He also muffs the crucial transformation scene, which relies almost solely on performance rather than special effects. Incidentally, the make-ups were provided by Stan Winston. But Casey’s physical scenes are very convincing - he excels at throwing people across the room! 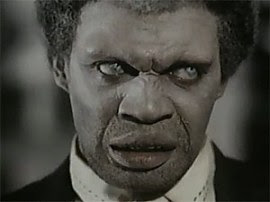 Technically, I think this is the best of the blaxploitation horror films - it's better written than most, with the money to provide enough action. Despite William Marshall’s princely performances as Blacula, I’ve found the other 'black' horror films dull and too cheaply mounted. Dr Black, Mr Hyde is faster-paced, with an interesting if scattershot premise.

While various sub-plots are introduced, little is made of them. Dr Pride gets whiter each time he transforms, and he seems to be falling for Linda, but then chooses her as another test subject.

The film has political points to make, but these are unbalanced by the harsh treatment of the female characters (like pimps keeping their girls in line), nudity expected of the female cast, and comedy relief being provided by drug-pusher characters. Dr Pride and his girlfriend Dr Worth would be fine professional role-models if it wasn’t for his greed for success.

This has now been released by VCI Entertainment on region 1 DVD.

A Dr Black, Mr Hyde trailer is here on YouTube... 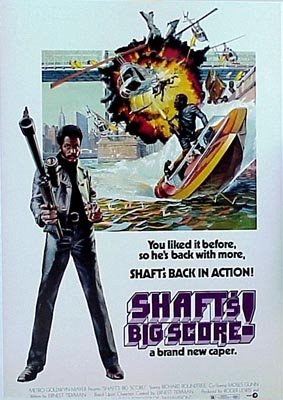 Thrillers like Shaft and comedy-dramas like Cotton Comes to Harlem were far more successful vehicles for empowerment than horror films could ever hope to be. However, they were part of a wave of films that provided all-black casts (with a couple of token honkys) for every movie genre.

My favourites from that era were the bigger budgeted affairs that crossed over into the mainstream – Car Wash, a slice-of-life comedy with a classic soundtrack, and the all-action Shaft’s Big Score, starring ‘black James Bond’ Richard Roundtree. 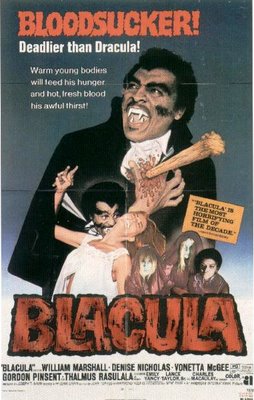 Although horror is my bag, man, the blaxploitation horrors are mostly unenjoyable, partly because they are so hard to get to see in any decent state. To enjoy a film where the print is badly damaged and the audio hissy and inaudible, it's also difficult to evaluate them properly. But I don’t think even a sparkling new transfer of Blackenstein, Blacula, Abby (aka Black Exorcist), or The Zombies of Sugar Hill will change my mind. 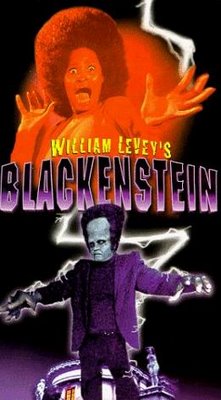 Do you want to know more?
Here’s a starter list of blaxploitation films from Wikipedia…

And a review of Sugar Hill that made me want to go back and re-watch it. 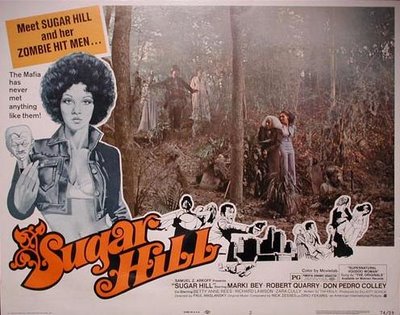