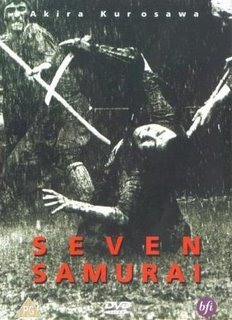 I’ll not do extensive reviews on classic movies like this (and recently Jaws). I’m just going to give my impressions.

I’m not huge on Samurai films (unless of course they have demons in them) but I wanted to see what Akira Kurosawa was up to while his colleague Ishiro Honda was directing the very first Godzilla! Both films were made by Toho Studios in the early fifties. To be impressed today by Seven Samurai, I think you have to imagine what films were like at the time – the realistic locations and fast, furious tracking shots must have been a breath of fresh air. The tough depiction of rural life in the 17th century, sex and violence and all must all have been pretty racy too.

Today it’s a good story, which was famously borrowed by The Magnificent Seven in 1960. But whereas Hollywood built up ‘The Seven‘ to almost superhero status, Seven Samurai tells the tale far more realistically.

Poor farmers, low on weapons and fighting skills, have to beg hungry soldiers to defend their village from bandits who have promised to return after the harvest. I was surprised that the seven samurai characters were realistic and not iconic, modest rather than flashy. The farmers also have to accept that their saviours lead lives not so different from the raiders.

I was surprised at Toshiro Mifune – he plays a wild samurai with so much enthusiasm it’s almost overplayed. The quiet leadership of Takashi Shimura as Shimada is far more memorable. Shimura, who also appeared in Godzilla (as the old Professor), is bald in the film, like Yul Brynner, because his character has shaved his head for a disguise.

Amazingly, at three hours and five minutes, there’s not much flab. Every scene helps us to understand the different characters or show us the details of the long and hard-fought battle of wits between the two sides. But if it’s heroes and stunt-heavy gunfights you want, The Magnificent Seven is the winner.

The strengths of Seven Samurai are the attempt to depict life as it then was, the classic story, and the attention to detail in the plot and the actions of the characters.

I wouldn’t say this is a 'must-see'. Like Citizen Kane is supposed to be the classic of American Cinema, to appreciate it needs an understanding of contemporary culture and the history of cinema. But not everyone wants to do homework before they watch a movie.

I will say it’s an excellent lesson in siege tactics, how good movies looked fifty years ago, and how hard life was in Japan 400 years ago.

This specially restored 185 minute version is available on BFI DVD. It also expects you to know a few words of Japanese, because not everything is translated!