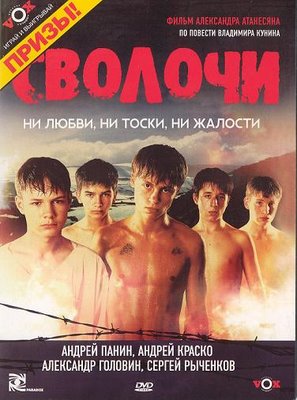 The cover artwork for this made me think this was going to be a Russian Lord of the Flies, but where in Russia are there islands hot enough to walk around half naked? An advanced news article on the TwitchFilm site (which includes a link for the trailer) slightly misdirected me into thinking the plot was more of a Battle Royale scenario. 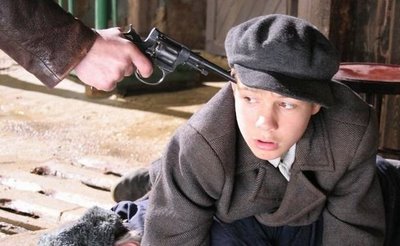 But this is actually a gritty wartime drama set in Russia in 1943. Young orphans turn to crime and kill for food. A few are caught by the police after a fierce and bloody struggle.

Teen and pre-teen crime is getting so bad that the authorities now treat all criminals equally. The boys are no longer protected from the death penalty by their age. Instead of being executed, some are given a chance to join a special operations Army squad.

The main story is the gang of boys going through arduous training in a remote mountain camp. They try to break the rules, escape, shirk, but at least they are alive. The finale is the special mission itself... 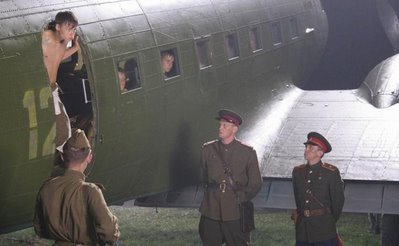 This teen Dirty Dozen was gripping enough, though it was severely let down by sub-standard visual effects at the climax - Night Watch this isn't. It looked like the animatic storyboards had been left in!

I was quite impressed with the film until I read here on KinoKultura that it most probably wasn't a true story at all. There had been a huge fuss in Russia about the country being portrayed as using children in the army in WW2.

What's left is an insubstantial story that recounts events that never happened, as if they had. As a fictional allegory about using children as soldiers, it's insubstantial.

Still, the sweeping location photography is very impressive, as is the acting and the soundtrack.

The final mission looks way too easy, and didn't really need children to do it at all, severely compromising the premise. The writers should have watched a few episodes of Joe 90 and thought of a more convincing mission. After a great start, it runs out of steam.

This Russian DVD has good English subtitles for the dialogue, but many location captions are not translated, including the opening blurb that originally claimed that the story is based on truth.

The 16:9 anamorphic picture is crisp, showing off the locations nicely. However, the aspect ratio in the trailer and documentary clips is framed tighter vertically, inferring that the theatrical release was cropped closer to 1:2.0.

The extras include an extended look at the production - but aren't translated, rendering the many interviews useless. However, the behind-the-scenes footage shows off the location stuntwork - where they were using cardboard boxes instead of airbags to cushion the stuntman's high falls - a noticeably low tech, low budget method. The remote camera crane is also a nuts-and-bolts contraption, but it works beautifully.

I bought my DVD here on AllDVD, (a great tip from Twitch - it's hard to find good Russian sites). Make sure you order the version with English subtitles.

Do you want to know more?
Loads more stills from the film here.