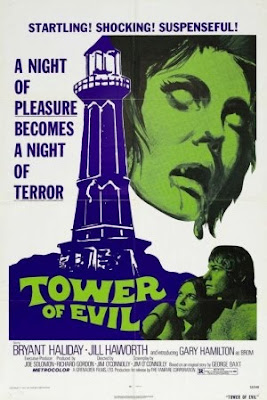 An expedition sets out to discover the island’s secrets, to find the killer and look for old gold. The team includes two couples involved in a love quadrangle, even more complex than the usual love triangle. They are in for a night of more bloody mayhem and sexual shenanigans.

There are red herrings, blood-lettings, bouts of madness, explicit sex, and the extended use of fast-cutting, with subliminal shocks, accompanied by a woman screaming. If you want to put an audience on edge, make them listen to screaming for a whole minute – it’s nerve shredding. The subliminals interestingly flash forwards as well as back in the story.

Mixing Hollywood haunted house films, with the seventies slasher cycle about to happen in the US.

At the time, Tower of Evil pushes the boat by challenging the censor with as much nudity, sex and violence as possible. Pre-empting slashers with its ‘have sex and die’ and 'smoke pot and die' slasher ruels. It also reminded me of a european giallo - maximising bloody slaughter, nudity and love-making as far as possible. Unlike a giallo, Tower of Evil is without any overt style in either cinematography or fashion! 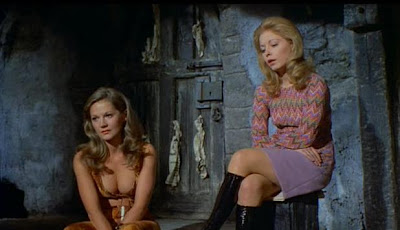 Tower of Evil is fast-paced entertainment, sincere performances leavened by scathing sarcasm and fruity language. The shocks alternate with many cheesy moments that undermine the grisly atmosphere.

I still can’t forget the laughs in the audience when I saw this supporting Death Race 2000 in 1976. A fake head rolls down some fake stone stairs, only to be capped with a shot of the actress’ head poking through the floor of the set – a stupidly obvious effect that was stupidly still considered a good idea to be used in Alien (which also got laughs when I first saw it in London in 1979).

The aforementioned decapitation effect has an impressive start though. Before the head rolls down the stairs, there’s a wide shot of the body of a naked girl, found with her head turned backwards. As someone touches the head, it parts from the body, leaving a headless corpse. This is either a superb fake body, or the actress’ head has been painfully bent back and hidden beneath the floor of the set, pre-empting the similarly stunning effect that Tom Savini used on a mortuary slab zombie in Day of the Dead (1985). 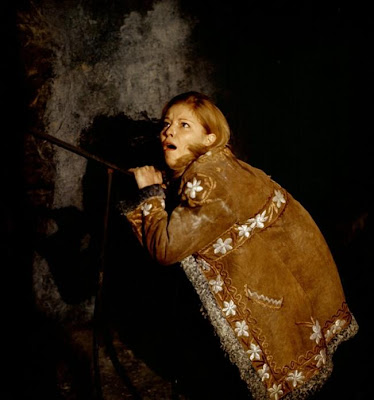 The story tries its best to confound the audience until the very last moment. The film delivers from the very start, as two fishermen arrive on the island to discover the aftermath of a massacre. Already we are hit with several shocks, mutilation, murder and frantic nudity. 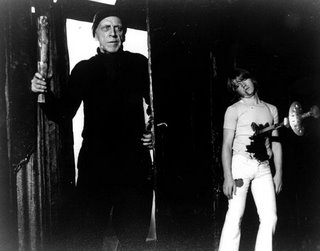 A survivor is taken back to a strange white room for a very unorthodox interrogation, involving regressive hypnosis induced by disco lights and injections of prescription drugs. This is presented as being OK if the police use them. The white room and flashing coloured lights is similar to the hypnosis machine from The Sorcerers. 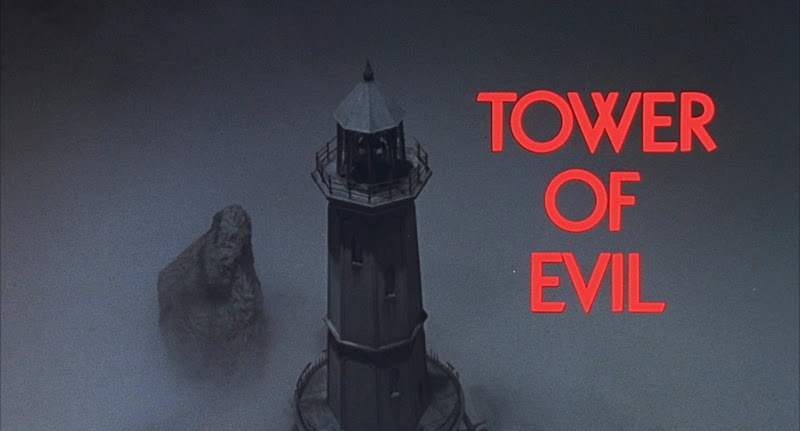 The island and lighthouse are admittedly stage-bound, but the large sets are impressive. Again, if this was made in Europe, the setting might have been more stylised, but here the idea is to aim for visual realism. This is partly undermined by overconfidence in optical effects. The boat that brings them to the island shows off back-projection at it’s worst, and the opening foggy lighthouse is a brazen model, but other effects prove to be far more successful and even mystifying. 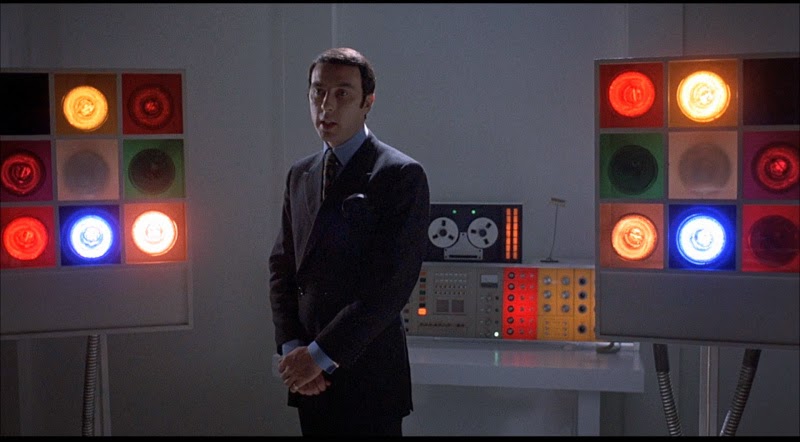 The contemporary use of skin-tight flared jeans leave little to the imagination – and that’s just the men. The extended nude scenes show off topless jiggly women as well as fit young manflesh, a relative rarity in the genre. Full rear nudity courtesy of John Hamill, also one of the divers in the opening scene of Trog, which also starts off with an half-naked hunk-fest. One nude sex scene in Tower of Evil is all the more explicit because of the complete lack of bedclothes. Halloween, this is not. 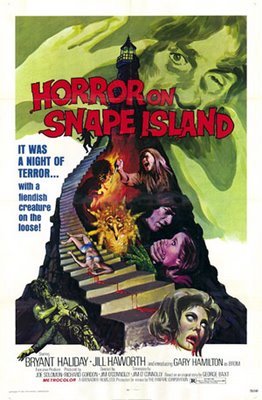 Tower of Evil has a cast of British horror part-timers. Most have done one or two horrors but none could be considered regulars. Jill Haworth (Haunted House of Horror, It!, The Mutations), and Bryant Haliday had brief stabs as horror icons (The Devil Doll and The Projected Man). There's familiar support from Jack Watson as the boatman, who appeared as a vengeful ghost himself in From Beyond the Grave, but usually played stalwart police and army men. Dapper Anthony Valentine played many villainous smoothies, here plays a police interrogator – his other main horror role was in Hammer’s last horror To The Devil a Daughter, though he also proved how vicious he could be in Performance.

Two faces hard to take seriously in this, because they usually played comedy, are Robin Askwith, who later made his name in the bawdy sex comedy series that started with Confessions of a Window cleaner, and Derek Fowlds, already known as the straight man to the TV glove puppet funny fox Basil Brush, and later became Nigel Hawthorne’s sidekick in the long-running parliamentary sitcom Yes, Minister.

Director Jim O’ Connolly certainly makes a great effort to lift this above the cliches. It improves on his earlier horrors Berserk! (1967) and a low budget favourite of mine The Night Caller. Connolly also wrote the screenplay for Tower of Evil (based on a George Baxt novel). Connolly may be best known as the director of 'cowboy vs dinosaur' epic Valley of Gwangi - one of Ray Harryhausen’s classic special effects films. 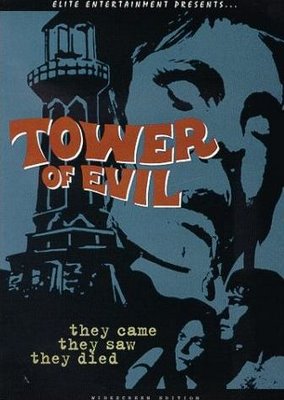 The region 1 DVD from elite Entertainment is well restored, taken from colourful sources that don’t look their age – but it’s quite an old DVD and was presented 1.85 widescreen, non-anamorphic. The letterbox crops off some nudity and feels too severe compared to the 4:3 VHS that I’ve become used to over the years. Though even in the cinema, I remember the boat scenes being unconvincing because we could see how far out of the water the boat was, without any waves being seen, so it probably looks more convincing with the image cropped. 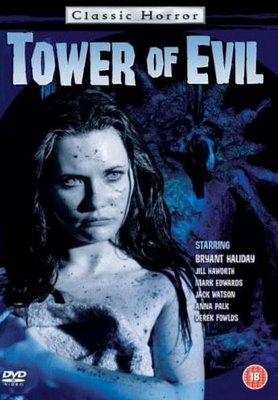 Candace Glendenning on the cover of the UK DVD

This is the only UK DVD release so far, from Simply Media. 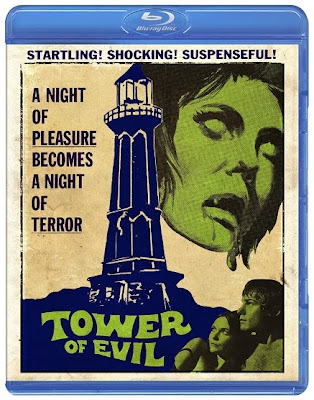 Scorpion Entertainment released this blu-ray in 2013, remastered from the original inter-positive. The picture appears a little scratchy at the start, but thankfully clears up. The first reel also sounded quiet and a little dull, but again, soon improves.

The extras are only two battered trailers, from the UK and US release - the latter as Horror on Snape Island. But I'm thankful that it's on blu and finally 16:9 anamorphic widescreen (Amazon incorrectly list it as 1.33 aspect).