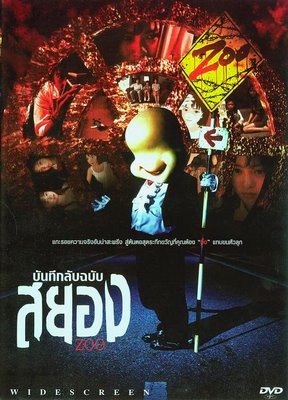 Zoo consists of 5 short films, all based on stories by author Otsuichi. Each story has a different cast, a different director and even a different scriptwriter. The result is unsurprisingly uneven. 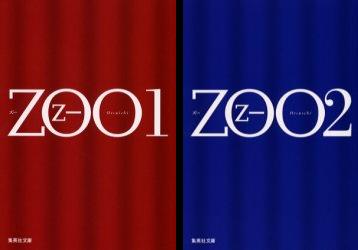 Two Japanese books of Otsuichi's short stories
There’s no linking material, just a creepy, creeping red title graphic. The cheeky, eyeless character in the evocative poster and DVD art unfortunately doesn’t appear in the film. I was expecting that little figure to be a linking device.

I guess though that the stories are loosely linked by the themes of death and cruelty.

Japanese flyers for the five segments
1. Katari and Yoko
The film opens with a horrifyingly realistic image of a girl falling backwards from a block of flats. She has not jumped forwards, she’s been pushed back. We’re not sure whether it’s a flash-forward or a dream.

Ryoko Kobayashi (also from Hinokio) has a difficult dual role as two teenage sisters – one treated like a princess by their mother, one kept in a cupboard and forced to live like a dog, being beaten whenever she slightly annoys her mum.

Strangely, Yoko’s abuse seems to go unnoticed and ignored by the outside world. Surely, if she was taken to the school nurse, her many bruises would be seen. Also, her sister’s reactions to the violence, physical and otherwise, are vague – it’s implied that Katari is complicit and complacent. There’s many aspects of the story that are frustrating. But then there wouldn’t be a story.

As Yoko reunites a lost dog with its owner, she makes a friend, and perhaps she has finally found refuge from mother…

This first segment is still interesting as a horror tale, but it’s the performances that are the weakest here. Such meaty characters have been, as usual, given to a young pop star rather than a trained actor.

2. Seven Rooms
This is more intriguing. Mirroring situations familiar from Saw and Hostel (but without the gore), a young woman and her little brother, Satoshi, wake up in a stone cell. There’s a plate of food by the door and a concrete gutter of running water for a toilet.

The little boy finds he can push along the gutter to six other cells. Talking to the other prisoners, they discover that one disappears each day, then there’s a new arrival the next.

This should have been more frightening than it was – how many directors could foul up the arrival of a dark figure with a chainsaw in an enclosed space? Again the performances and the direction could have been a lot stronger here, but the story reaches a very satisfying conclusion. Like the claustrophobic Haze, I wished this could have been longer! 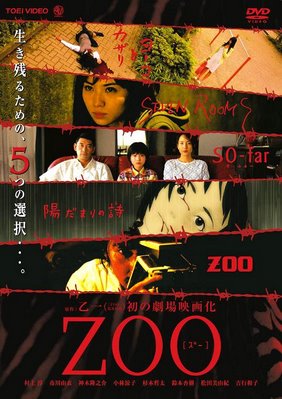 3. So fa
Thankfully this story has stronger performances. But this time the story is weaker.

A young boy (Great Yokai War’s Ryunosuke Kamiki) is left alone in family the apartment one evening, he hears about a fatal car crash on the radio. When he wakes up, his parents are back in the flat, but cannot see each other. Only he can see both of them.

Because story telling can be subtle in Japan, it’s not unusual not to see the crucial incident – we hear the crash, it’s more tragic and less sensational that way. It’s also cheaper to film - but I didn’t think of it as a cheat. In western films, if we didn’t see the crash we’d immediately know it was a story point. In Japan, it could just be the way the story is told.

Anyway, is the boy seeing dead people? We don’t know if just one of them is dead, or what. This short scenario doesn’t really develop until the pay-off.

4. When the Sun Shines
This was my favourite - it’s a short 3D CGI anime about a scientist and the female android he’s created. He’s created it for company, but has to teach it how to behave. Set in a house in the countryside, the android also has to learn about life and death...

5. Zoo
Lastly. Another nasty tale, of a photographer’s obsession with taking polaroids of his girlfriend, even after she’s dead! A pivotal scene takes place at a Zoo, but I wasn’t so impressed with the story. 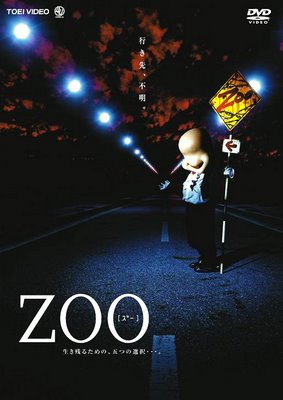 But each to their own – with five different directors, casts and stories – this is a grab bag where each tale could appeal differently. They’re certainly unpredictable and miles better than many of the Japanese scary tales of terror and horror that have actually been released in the States.

I'll certainly be revisiting this in the future.

Zoo has crept out on Thai DVD with unpublicised english subtitles. Initially heralded by TwitchFilm over a year ago - it’s yet another Japanese title that’s in limbo, much like the cover art depicts.

eThaiCD provided my copy – their website is innaccurate in saying there’s no english subs. They’re correct in saying it’s got Japanese 5.1 audio and an anamorphic widescreen aspect.