THE NANKING MASSACRE - two films to remind us 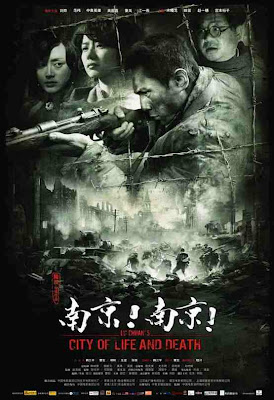 Why do I do this to myself? First I watch two intensely depressing dramatic recreations of war atrocities, intense enough to haunt me for days. Then I decide to review them, challenging my love of Japan with these accounts of atrocious conduct by their armed forces.

In 1937, when Japan was invading China, its armies conquered the (then) capital city of Nanking. The Japanese army then began killing the prisoners of war, then the civilians, to strike a psychological blow to the rest of China. Knowing full well that they were breaking international conventions of war, they disguised the massacre from the rest of the world.

These are two very different films about the siege, serving two audiences: one is obviously intended for 'international cinema', the other (possibly unintentionally) is 'exploitation'.

Though they're tough viewing, knowing that these events actually happened, I wanted to learn more about the depths that the Japanese army sank to. While I admire Japanese culture, pop and otherwise, I've mainly been learning about their history from their viewpoint. But after visiting several of Japan's neighbouring countries and reading their news sites, I became increasingly aware of 'old wounds' and lasting hostilities.

While the US and Europe are hyper-conscious of the history of Nazi Germany, we mainly remember wartime Japan for Pearl Harbor and Hiroshima. In China, Korea, Malaysia and the Philippines, Japan was regarded the same way we saw Germany. Indeed, the scale of Japanese war crimes and the variety of atrocities rivals Nazi Germany.

So I'm having trouble joining the dots between their peace-loving society of today and the extremes of their wartime mindset. How can a country change so quickly and so completely? I guess the answer is closer to home - my own country has much to answer for in it's conduct abroad, both recently and historically.

I'm not going to boycott Japanese culture for the crimes of the past, but I'm not going to ignore history either. When I first heard of the 'Rape of Nanking', I naively assumed it happened centuries ago in more barbaric times. To find that it was only last century showed up a large gap in my historical knowledge. 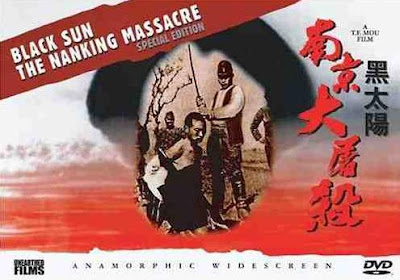 Relentless gory propaganda
This is a weird film that would need much more research to determine what the film-makers were trying to do, if I was at all impressed by it. The director, T F Mou, denies it's an exploitation film, and the size of the budget seems to lift the project out of that genre. But it's an endless diary of gory re-enactments of war atrocities, with little story or drama, and a near absence of continuing characters. The Japanese soldiers storm around the city, killing and raping. The commanders take pleasure in trying out various methods of execution, from machine-gun to samurai sword.

It looks like a wartime propaganda film, but it was made 1994. I'm almost guessing it was intended to pressure the Japanese government on outstanding issues - maybe compensation, apologies, selective history books? The other likely result was to incite outrage amongst Chinese audiences.

Compare this blunt approach to any modern American movie about the Nazis. One moment in Black Sun made me remember a silent movie where Eric Von Stroheim throws a baby out of a high window. The scene looked comical: a swift but lazy cinematic shorthand to make you hate the character in seconds, and tell you what to think about all German commanders.

While City of Life and Death shows only one Japanese leader orchestrating the destruction of the city, Black Sun takes pains to name and shame many different commanders and their personal roles in the killing. This is perhaps another clue to the movie's intentions.

After a while, the many shock moments reminded me of the climax to Soldier Blue, but in contrast with it's involving characters, storyline and complex portrayal of the invaders as well as the invaded (Soldier Blue himself is shocked by his own sides' misconduct). The Japanese soldiers of Black Sun are portrayed with a uniform hive mentality. It also doesn't help that the Japanese soldiers all look very Chinese. Only the commanders look as if they're played by Japanese actors. Lazily and inaccurately, the soldiers of both sides talk in Chinese.

I expected this to be far more cheaply made than it is. It looks largely authentic, uses a lot of extras and some extensive locations. The most spectacular scene illustrates how the Japanese burned the bodies of civilians before dumping them in the river. They could then claim that they'd only killed soldiers. The scale of the fire of hundreds of bodies along a riverbank rivals the inferno at the end of Apocalypse Now.

But if there's any doubt that what we're being shown happened, the catalogue of atrocities is verified onscreen, by cross-cutting with actual photographs and filmed footage. The power and importance of these images was not lost on the Japanese army who made every effort to destroy any incriminating material that left Nanking at the time, and they burnt any such evidence of their own when the war was lost.

There's no doubt that all this and worse actually happened, but without any emotional involvement and a clumsy, one-sided approach, it's a far less powerful and informative film than it should have been.

I watched the US region 1 DVD, which fills in much of the historical context with an informative old documentary episode of Frank Capra's Why We Fight as a DVD extra. 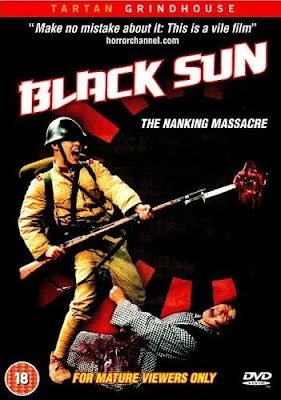 In the UK, it's purely been sold as exploitation, check out the crass DVD cover, which somehow borders on comedy, using a poorly staged publicity shot of one of the film's most infamous scenes. Contrast that with the US DVD cover that uses an actual archive photograph.

This is actually the fourth in a series of films, called Men Behind the Sun, which I won't be investigating any further. The first film in the series has an important subject, the horrifying human experiments of Camp 731, but the inclusion of animal cruelty and mondo footage (using an actual corpse for one scene) means I'll avoid it. However, the story of Camp 731 has one hell of conspiracy storyline and I'd like to learn more about it.

Black Sun is a bizarre experience - as it abandons so many movie conventions - that it's fairly silly to compare it to the professionally and artfully produced City of Life and Death. But I have. 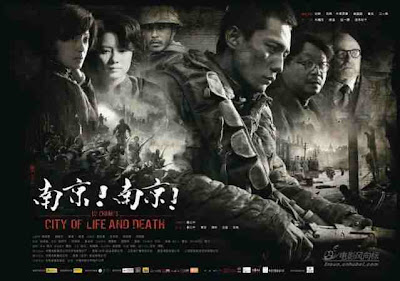 This major new film, shot in black and white, is still being premiered round the world. It's also about the Nanking during the Japanese siege.

While Black Sun throws out plenty of factual context in captions and voiceovers, this has no such introduction and relies on small badly-written postcards to set up a little historical background. Black Sun also portrayed the Chinese, soldiers and civilians alike, as totally defeated. This begins with the army still defending itself, albeit with guerrilla tactics. It also sets up storylines with soldiers from both armies, one Japanese soldier being just as traumatised. 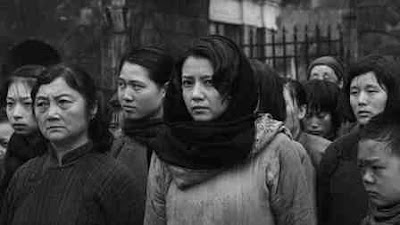 The success of the film is the emotional involvement with the characters, focussing on the family of the Chinese translator to John Rabe - a German envoy famous for his attempts to protect the civilians against impossible odds.

Unlike Black Sun, if anyone gets hurt, raped, slaughtered, the impact is devastating. There's a dreadful scene that's basically a point of view experience of being herded into a mass slaughter. 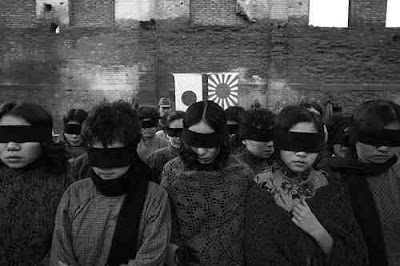 After the threat of counterforce has been systematically eradicated, the invading army are rewarded with 'comfort women', Japanese prostitutes rationed out to the soldiers. But as the siege wears on, the supply of women starts taking Chinese 'volunteers'. The widescale use of civilian women for sex lends an awful, literal meaning to 'the rape of Nanking'.

While the Japanese use of unnecessary force was meant to terrify the rest of China, it instead unified the regions of the massive country into an unbeatable foe.

The inclusion of a sympathetic portrayal of a Japanese soldier has drawn criticism from Chinese critics, complaining that the tone of the film wasn't harsh enough on the Japanese. Perhaps they would have preferred a less-sensitive, less balanced film, like Black Sun perhaps?

I'd recommend City of Life and Death as a beautifully made and observed film on a harrowing subject.

It had a limited cinema release in the UK and there'll be a DVD and Blu-Ray release in August. I watched a Chinese DVD, which may be slightly censored (missing some violence). The subtitles didn't translate all the onscreen signs and nameplates.

The excellent WildGrounds site has an article comparing City of Life and Death to actual (and upsetting) photos from the siege.