Thriller-writer Brian Clemens at the top of his game

A blind woman unaware that everyone else in her house is dead... Sounds like a crass scenario, but this was typical treatment for women-as-victims in the seventies. She endures gruelling hardships as she tries to escape the killer, and needs men to come to her rescue. There isn't a single situation where her disability is turned to her advantage! But for all that, it looks realistic, and we really sympathise and suffer along with her. Also, with the bloody tortures on offer in today's 'survival' horrors, we're all getting off lightly.

So, here's an older movie with two different titles, both of which have been re-used for recent unrelated movies. To keep it clear, this isn't Blind Terror (2001) with Nastassia Kinski, or See No Evil (2006) with WWE's Glen Jacobs. This is the 1971, Mia Farrow movie. A tense thriller scripted by Brian Clemens, in the same nasty psycho-killer vein as And Soon The Darkness (1970). 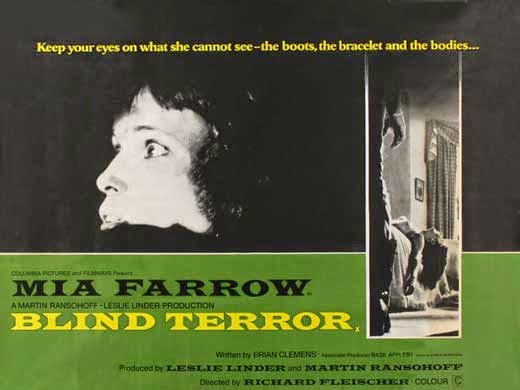 Brian Clemens rose to fame in the sixties, progressing from scripts for Danger Man (among many others), to creating the hit TV series The Avengers, which still ranks as must-see TV. His endless deadline-defying creativity, and knack for twisting plots in order to stay ahead of the audiences, finally led to work in generously-budgetted movies.

The seventies saw Clemens' major work in movies. He scripted Hammer's Dr Jekyll and Sister Hyde (1971), Harryhausen's The Golden Voyage of Sinbad (1974) and even directed Captain Kronos - Vampire Hunter (1974), which he'd intended on being a film series. It was shame more Kronos movies weren't made, and that he didn't direct more. I asked him recently whether this was because he didn't enjoy directing, but he assured me that he really did!

The decade ended with a ghostly script for Disney, The Watcher in the Woods (not released until 1980), by which time he was back making TV, with fresh series of The New Avengers followed by The Professionals. He also found time to write 42 movie-length episodes of Thriller - a Saturday night excursion into psycho-killers and the supernatural, full of similar twists and turns seen in And Soon The Darkness and Blind Terror.To hear from the man himself, there's a great 'career interview' with Brian on the Classic Images website, linked here. For British-made Blind Terror (1971) the producers no doubt thought they'd make their own spin on Wait Until Dark (1967), a play-turned-movie which had been a huge hit for Audrey Hepburn, where again a young blind woman is terrorised by a mad psycho (Alan Arkin). The opening shot of the film -
blaming non-existent horror films for murder!


Blind Terror opens with a cheeky montage of reasons that might inspire an ordinary man to murder. He walks past shops selling toy guns, violent comics, television sets (showing violent programmes), and has just been to the cinema to watch 'Rapist Cult' (which isn't a real movie, in case you're wondering). But unless the rest of the audience also leaving the cinema have also turned into psycho-killers, (which could be quite a good story), this isn't very informative. Oh yes, and all we see of him throughout the film, is his cowboy boots... The killer is very keen on his boots, and doesn't take kindly to having mud splashed on them. To avenge his muddy boots, he tracks down the owners of the car responsible, in order to wreak bloody revenge... um, for his boots.

That car was driving away from the station, where a family were taking their blind niece back home. Sarah (Mia Farrow) grew up with them, so she knows her way around quite well. She likes riding horses and has a sort of boyfriend. But one night, returning from the stables, she goes to bed not realising that the entire family has been slaughtered... No, she's not cross-eyed through the entire film...

This film has a convincing central performance by Mia Farrow, who does an excellent job of appearing blind. But the writer and director milk this scenario mercilessly as she walks around the house and can't see the corpses lying around, as well as broken glass on the floor. After much suspense, Sarah makes a horrifying discovery, that the killer might be returning soon to the house...

Throughout her ordeal, we are also in the dark who the murderer is. So it's a whodunit, as well as a tale of survival in the countryside. 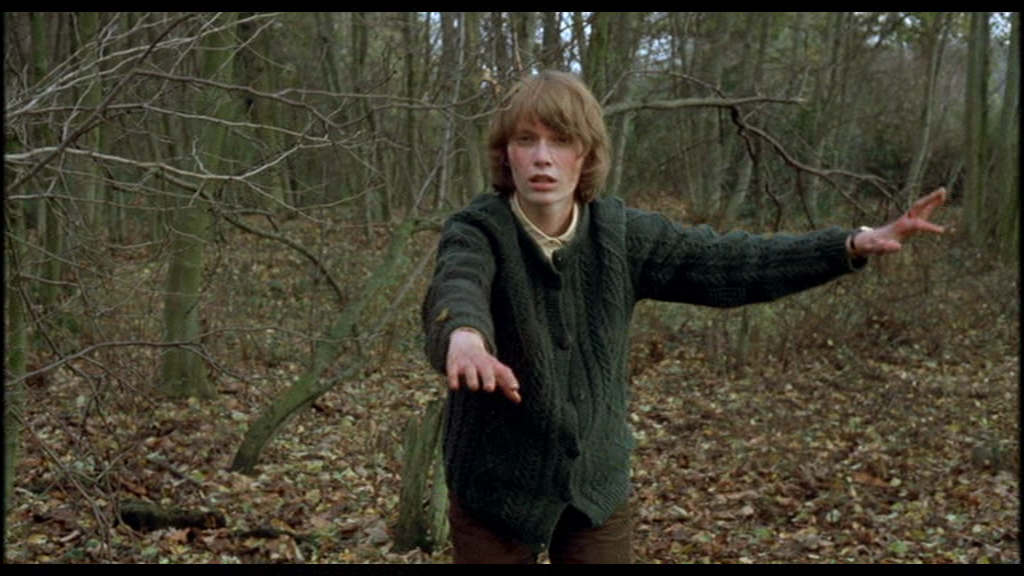 Mia Farrow looks very young here and, at the time, was making a string of movies in England. This was three years after her previous horror, Rosemary's Baby (1968), and three years before she was in the Oscar-winning The Great Gatsby, also shot in England.

Anyone who knows their British TV of this era, will be tickled to see that her boyfriend is played by Norman Eshley, who co-starred in the hit sitcom George and Mildred (a spin-off from Man About the House, which crossed the Atlantic and became Three's Company) as the Ropers' long-suffering neighbour Jeffrey Fourmile.

To keep us guessing, there are numerous others in the cast who may be red herrings. Among them a very young Michael Elphick (The Elephant Man) as a no-good gypsy, Christopher Matthews from Scars of Dracula and Scream and Scream Again, and Paul Nicholas just before he shot to fame in the pop charts and in Ken Russell's Tommy (as nasty cousin Kevin).

The director is the late Richard Fleischer, who was presumably picked because he'd made The Boston Strangler. Mind you, with credits like Fantastic Voyage, Doctor Dolittle and Soylent Green, he could easily succeed in any genre. The result is a tight and suspenseful thriller, that only really disappoints at the very end... 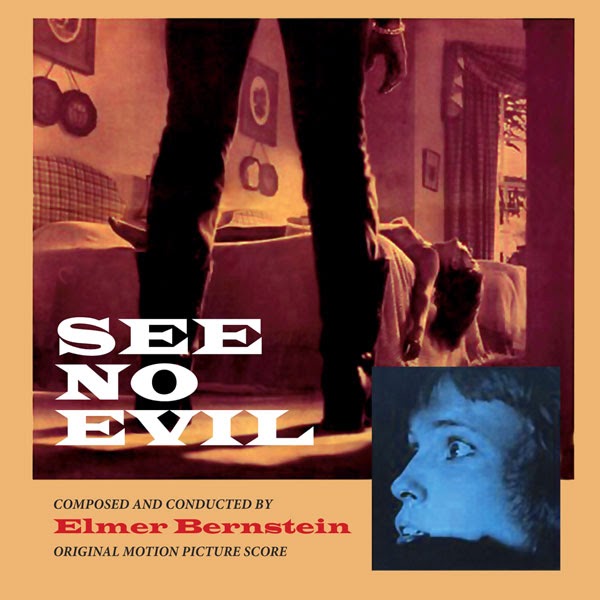 Veteran Hollywood composer Elmer Bernstein pumps up the action scenes almost too much, with a sweeping and memorable soundtrack that's suitably threatening when the killer's around. He even manages to lapse into his familiar western-style themes for the horse-riding scenes. (Update, October 2014: Bernstein's complete score has now been released on CD. Film Music Reporter.) This recently released DVD makes an old film look brand new, and presents it in 16:9 anamorphic, which looks like roughly the right framing. However, the UK DVD contains the US cut and retains the US title See No Evil. I'd rather have the UK title Blind Terror on sale in the UK, please. Screengrab from the UK VHS release

The US version of the film is substantially the same length, but uses many alternate shots. It's far more lecherous, with numerous close-ups of female chests in tight sweaters, in the pub scene for example. Why these weren't in the X-rated UK version, I don't know. The victim on the bed in her underwear gets an extra close up in the US version, perhaps to tie it in better with the publicity poster? (Note: I was comparing the UK DVD to an early UK VHS release, pictured at top). 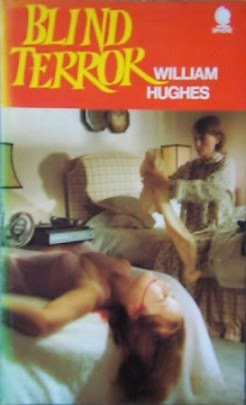 A couple of behind-the-scenes photos, of Mia Farrow and director Richard Fleischer during the filming of Blind Terror, can be found here.