THE CASE FILES OF YOUNG KINDAICHI - an overview

Forget Sherlock Holmes and Scooby Doo - who's the greatest detective in Japan? Kindaichi!

The more I investigate this character, the more I find out! Anime, manga, novels, TV and movies. There are the period murder mysteries featuring Kousuke Kindaichi, or there are the modern-day cases solved by his grandson, Hajime.
The stories usually flirt with supernatural explanations (to throw us off the scent), the murders are numerous and bloody - some stories border on slasher movie territory in terms of body counts - and the plots are twisty, often delving back into numerous flashbacks to explain the motivations and actions of the killer. 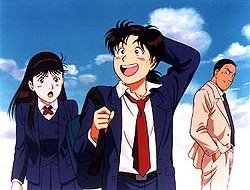 The Case Files of Young Kindaichi (TV anime, 1997)
I first encountered Kindaichi in the Toei Studios' anime series Kindaichi No Jikenbo. This franchise of both manga and anime is the character's most famous incarnation in the west. Teenager Hajime is a goofy student, slightly accident prone and sporting a pony-tail. He's usually accompanied by girl-friend Miyuke Nanase, who normally ends up being seriously injured or at least stalked by the killer - but Hajime gets all the glory. His Uncle is in the police force, so he normally has an excuse for getting into crime scenes.

There were a whopping 148 half-hour episodes made between 1997 and 2000, usually spreading each story over 3 or 4 instalments.

There were also two animated movies. The first, The Case Files of Young Kindaichi in 1996, riffed on the story of The Phantom of the Opera, and was based on the manga story The Opera House Murders.

When a play is produced in a theatre on a small island, a classic 'locked-room' murder can only be solved by Kindaichi. The film starts well enough, with the claustrophobia of being trapped on the island adding to the atmosphere. But after more people are killed, the action returns to the mainland, and the explanations and deductions take another half an hour of screen time to sort it all out!

The second movie came out in 1999 and was called Deep Blue Massacre. It too was produced by Toei Animation.

As well as the anime, there've been (I think) three live-action TV series centred on Young Hajime Kindaichi, again based on the manga stories. 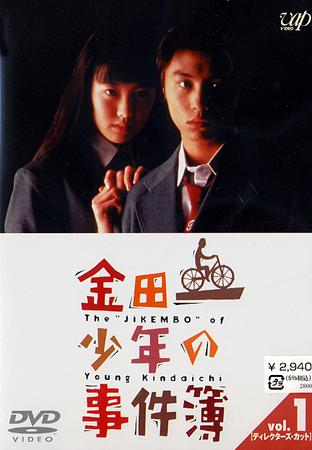 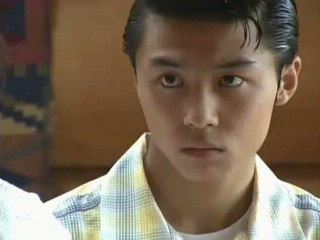 The Case Files of Young Kindaichi
(Kindaichi Shonen No Jikembo) 1995
This live-action series starred Tsuyoshi Domoto, a member of the Kinki Kids pop group. This series crammed entire stories into one-hour episodes. Aimed at teenagers, the stories have a little more sex, violence and bad language than the anime. They're fun and fast-moving, but with more broad comedy than serious thrills. Young Kindaichi is still accident prone and forever hungry, but here he's also unusually cute - a bit too much like a pop star. At least they didn't give him a ponytail.

His co-star (seen on the Japanese DVD cover above) is played by Rie Tomosaka. Incredibly, some of the same stories re-appeared in the anime, only two years later.

The Case Files of Young Kindaichi
(Kindaichi Shonen No Jikembo) 2001
Kindaichi returned as a second series with the same name but a new cast. This time starring Kazuya Kamenashi, he's the one on the right. As you can see, in the tradition of Kindaichi having silly haircuts, this time around, the character is sporting an androgynous Ziggy Stardust hairdo. 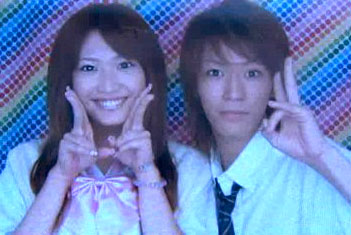 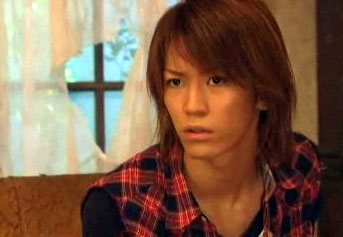 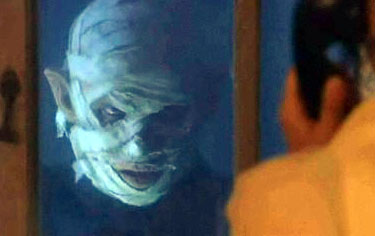 Both the 1995 and the 2001 live-action series are available on DVD from Japan, but without english subtitles. The series is slightly more serious (in tone) than usual, with more drama and thrills. The pictures above are from a feature-length TV Special (2005), where Kazuya is up against what appears to be a vampire...

The Case Files of Young Kindaichi 3
(Kindaichi shônen no jikenbo 3) 2005
The third Young Kindaichi TV series stars Jun Matsumoto as Hajime (he's the one on the left on the Japanese DVD cover below) and Anne Suzuki. Kazuya is in the pop group Arashi. Like the 2001 series, it's produced in widescreen and is out on DVD but with no English subtitles.

As well as the hour-long episodes, there's already been an expensive movie-length special, The Magic Train Murder Case, a story which was previously dramatised in the anime series. The music for this new series is a pounding, modern electro score that I really like. 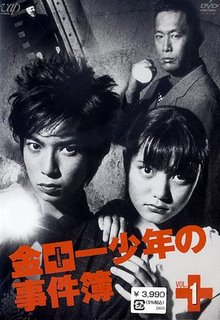 So if you want spooky teen drama with a healthy dose of murder, Young Kindaichi is for you. If you prefer something a little more mature, the you'll be better off with the 'old' Kindaichi. The character of Hajikme Kindaichi isn't old in the films, they're just set a long time ago. Hajime is the "Grandfather" who Young Kindaichi keeps swearing that he must not fail. To read about him, go to this post...

(Thanks to 'Vera' for helping me get my facts right!)