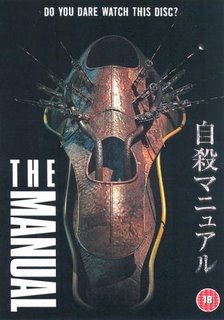 SUICIDE MANUAL (released as The Manual in the UK)
I didn’t have my hopes set particularly high for Suicide Manual, but I was still disappointed by it.

This is directed by Osamu Fukutani, who also brought us the far creepier but slightly silly The Locker films (Shibuya Kaidan 1 and 2). Suicide Manual was similarly made on video, but released in cinemas in Japan.

It tells of a struggling reporter who investigates a link between a string of suicides and a mysterious black DVD that all the victims owned.

It looks very low budget, except for when we get to see the DVD ‘manual’ itself. If suicide ever becomes legal and there was a seductive promotional DVD available, it would probably look like this. Filmed mostly against black and hosted by Rickie, a woman in a black evening dress, viewers are presented with the pros and cons of each method of suicide, and shown footage of a few of the successful attempts. This footage looks far better made than the rest of the film. I even mused that the 'manual' might have been made first and the producers chickened out of releasing it and built a story around it instead?

The plot as it stands is too simple and simplistic, there's not an offer of help or self-help for real-life viewers or characters in the film. Anyone who looks like they are suicidal are shouted at and told 'not to talk like that'. This is unhelpful and verging on dangerous - to attract people with a title like this and offer no hope is, at least, irresponsible. I’m not getting preachy, but after all the film is based on a real-life book published in Japan which really is called The Complete Manual of Suicide. Here's the cover... 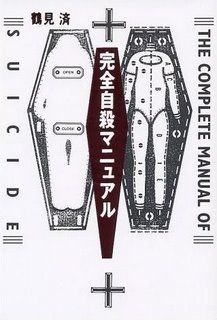 I was sort of non-plussed by the lack of invention in the story itself - I'm guessing that controversy had generated enough interest to help the project see the light of day. 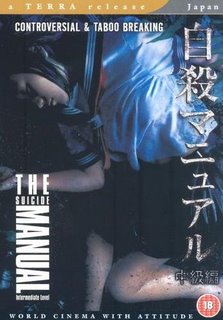 SUICIDE MANUAL 2: INTERMEDIATE LEVEL
This was again made on video, and released straight to video, but has far better production values, a larger cast, and a better story. You can even watch it without having to watch the first one.

Yosuke is helping investigate the 'serial suicides'. He has a personal investment in the case - his girlfriend Megumi is regularly attempting self-harm. The DVDs are still being linked to the case, and on closer inspection may be hypnotising their viewers… A woman in black is glmpsed by owners of the manuals...

Cleverly, in both films, the manual isn't a book, but a black dvd in an unmarked black case - the sequel attempts to make it a successor to the videotape of Ring.

At least in the sequel Yosuke is seen to seek professional help, and there’s more of a mystery and a possible supernatural subplot to interest the viewer.

It’s also a more emotional affair than the first film, for instance the moment of respect the police and surgeons pay the deceased before every autopsy, and Yosuke's relationship with his troubled partner.

Better shot, with more shocks, more plot, (but still not that great), Intermediate Level is more interesting than the first, but more confusing than creepy.

Both films are out on Region 2 PAL DVDs, but be warned that they are quite short, only about 80 minutes each.