CELLO (2005) absolutely everything is scary 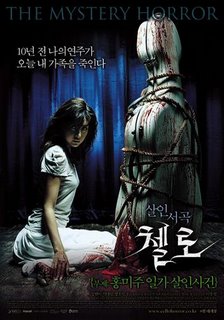 About as scary as jello, Yello or Elvis Costello

From last year's batch of South Korean horror films, this is the worst so far. I'd recommend The Wig and Voice way over Cello.

A cello teacher, recovering from a car crash, is being haunted by something or someone. Is it something to do with a spooky cello she bought for her spooky mute daughter, a spooky tape of cello music, or because they have a new spooky mute housekeeper at home...

The story has so many little red herrings in it, that I wasn't sure what was supposed to be scary. The camera paused on absolutely everything and everyone, with spooky music signalling that all the close ups were siupposed to be scary and significant. It took fifty confusing minutes before we thankfully got a flashback to clue us in to what the hell was going on.

There are a few sudden shocks rather than scares, but even these were misjudged, often obliterated by unconvincing and vague CGI effects. The scares seemed to be aiming at Ju-on: The Grudge for inspiration, but didn't work on me. The death scenes were silly or unimpressive, and the characters' reactions seemed muted and out of step with the events.

I really couldn't get into this - it looked OK, the budget is big enough, but the actors weren't allowed to show us any clues to what they thought was going on either. 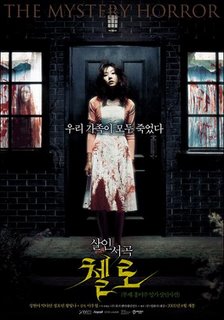 As usual, the posters looked good, but I expected more given South Korea's usually high reputation for quality horror films.

Cello is out soon on Region 1 DVD on the Tartan Asia Extreme series.